Hear Us Out: Ron Howard's How the Grinch Stole Christmas Is A Modern Holiday Classic

On its 20th anniversary, Howard's candy-colored adaptation of the Dr. Seuss story deserves to be recognized as staple of the season and one of his most underrated creations.

Chuck Jones had already achieved the impossible with 1966’s How the Grinch Stole Christmas!, turning Dr. Seuss’ popular short book into 24 minutes of stunning animation and beautifully transferring its heartwarming charm to the small screen. Boasting voice work led by the legendary Boris Karloff and an iconic song to match in “You’re a Mean One, Mr. Grinch,” the beloved TV special seemed poised to stand the test of time. Alas, what is dead may never die, and in 1998 a new feature film adaptation directed by Ron Howard and starring Jim Carrey as the iconic Christmas grump was announced, ensuring a very different Grinch would lodge itself in the memories of a younger generation.

Like Martin Scorsese, Francis Ford Coppola, and James Cameron, actor-turned-director Howard began his career behind the camera under the tutelage of Roger Corman. But soon enough, Howard’s earnest, old-fashioned, unobtrusive filmmaking became his calling card, with movies like Cocoon, Willow, and Splash. His talent for world-building and his ability to make audiences fall for his characters turned him into a powerhouse director and producer across multiple genres, and both skills would prove invaluable in his adaptation of the Dr. Seuss tale.

Howard’s How the Grinch Stole Christmas divided critics upon its release 20 years ago today, but it went on to become the sixth highest-grossing film of 2000. Audiences were met with a frenetic, bombastic version of a story they were already acquainted with, and, well, if they were expecting something akin to what Howard pulled off with Tom Hanks in Apollo 13, they were sure to be disappointed and possibly confused. But taken on its own merits, the film is a worthy expansion of the source material that features great performances and tackles still-relevant themes. How the Grinch Stole Christmas deserves to be recognized as one of the best modern Christmas movies and one of Ron Howard’s most overlooked films.

It Gave the Grinch and Cindy Lou Who Important Backstories

In what is perhaps the biggest departure from the original story, Ron Howard’s Grinch makes the Whos the antagonists and shows how their unchecked vanity created their biggest “monster.” In this version, it is Cindy Lou Who’s (Taylor Momsen) kindness and empathy that not only turns the Grinch into a mensch, but also turns the entire town of Whoville away from their obsessively capitalistic ideals.

The Grinch’s new backstory as a kid who was bullied out of Whoville gives us a reason to root for him and helps establish that maybe the Whos do deserve his Yuletide scorn after all. Cindy Lou learns through some spiffy documentarian investigating that the Grinch was ostracized for looking different and thinking differently (and for being in love with the Who that grew up to be Christine Baranski). As a result, he became cynical and resentful, locking himself away from a world that rejected him.

The film is a little clumsy in its attempt to be a story about “the other” – a shame, since there is something to the idea of how capitalistic societies tend to ignore and cast out their most vulnerable – but it’s executed well enough to be effective. Howard’s interpretation turned the Grinch into someone we could care about, a tragic victim of the Whos’ selfish and obsessive natures, which makes for a more interesting take on the classic tale.

When Dr. Seuss wrote the original story in 1957, he was expressing his disdain for the consumer-focused direction Christmas seemed to have taken at the time; Howard clearly wanted to show that things hadn’t changed all that much since then. The ’90s were a time of angst and excess; with this adaptation, Howard created something that was more familiar in theory to the wasteful world audiences were living in at the turn of the millennium. There are even jokes about how the Grinch collects most of the gifts the Whos toss out after Christmas every year.

Speaking of which, we see the townsfolk fret and obsess obnoxiously over everything Christmas-related, from mailing gifts on time to competing for Best Christmas Light Display (shout-out to Molly Shannon in her small role here as Betty Lou Who, A+ suburban mom). After the Grinch’s mischievous Jubilation rampage, we even see a Who offering to sell another clearly distressed man a hat rather than attempt to help him. Their mayor, Augustus Maywho (Jeffrey Tambor), is even more useless; he sets the example with zero compassion for his citizens in a time of need. It’s no wonder Cindy Lou is concerned that her fellow Whos might have lost sight of what Christmas is really about. The Whos aren’t just antagonistic; their unsatisfied thirst for material possessions makes them blind to their own faults.

Aesthetically, How the Grinch Stole Christmas is Baz Luhrmann-meets-Joel Schumacher, and it’s both wonderfully bonkers and thematically appropriate. Ron Howard and production designer Michael Corenblith crafted a world that felt lived in despite its over-the-top features and made it easy to escape into in a way remarkably reminiscent of what Howard did in Willow. It’s a significant departure from holiday films of the time, which were almost too-wholesome, too-perfect depictions of the holidays. No shade on Home Alone, but the chaotic energy that this new Grinch brought to the holiday scene was bold and attuned with the excess that accompanies consumeristic greed.

Jim Carrey and Taylor Momsen Are Perfectly Cast Against Each Other 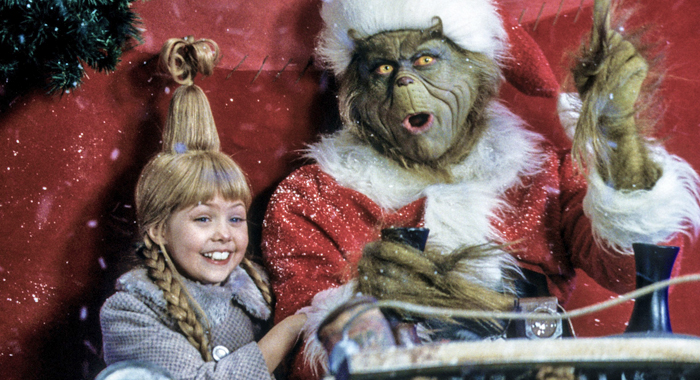 Speaking of chaotic energy, it was an inspired choice to cast Jim Carrey. This Grinch has curious interior design instincts, an appetite for glass, and a penchant for the absurdly gross. Carrey seamlessly steps into the role and fully owns its hysteria. When the Grinch grapples with whether he has time in his oh-so-busy schedule to step outside the safety of his home, let alone decide what to wear if he chose to attend the Whos’ Jubilation ceremony, it’s a relatable — and hilarious — moment that only works thanks to Carrey’s gloriously manic performance.

But Carrey gets to show a smidge of his dramatic acting chops here, too, in one of the film’s most heartbreaking scenes. When we return from the flashback to the Grinch’s childhood, the grown-up Grinch gazes down at Whoville, clearly hurting from the trauma of his past. The scene lasts only a brief moment, but it’s effective enough to secure our empathy (even if Roger Ebert vehemently disagreed).

The dawn of the new millennium was a post-angst, post-meta time, and How the Grinch Stole Christmas features an unusual amount of existentialism that makes it highly relatable to millennials. Who didn’t shed a tear at Cindy Lou Who’s power ballad “Where Are You Christmas?” Written by Mariah Carey (yes, that Mariah Carey), the film’s composer James Horner, and Will Jennings, the song is performed by Taylor Momsen in a scene that’s a little high on the cheese factor, but is really effective in expressing Cindy Lou’s sorrow over the seeming death of the true Christmas spirit. (All while wistfully looking out her bedroom window, no less.)

Beyond that, Momsen’s Cindy Lou is a spunky and unlikely Christmas crusader, and she’s a perfect foil to Jim Carrey’s intense energy. There is a warmth to her performance that is as comforting as hot chocolate on a cold winter day, and it’s palpable the moment we meet her holding a hilariously oversized bundle of gifts for her dad. With her earnest portrayal of Cindy Lou Who, Momsen holds her own and grounds the film whenever Carrey’s Grinch threatens to send it too far off the rails.

It’s Frenetic Because It Has to Be, and It Works

When the film was released, the majority of critics pointed out that its tonal inconsistencies and overly meta jokes seemed out of place and made for a jarring experience. These are valid points; the film is oddly concerned with the very adult lives of the Whos and, in particular, the breathy, sensual presence of Martha May Whovier (Baranski, who knew exactly how to play the role).

Without its hyper pacing, though, the film’s satire doesn’t quite land. Next to Jim Carrey ‘s delivery of spastic, hee-haw humor, a stilted, sedated Whoville just doesn’t make sense and wouldn’t inspire any sympathy for the Grinch in a way that would stand apart from the 1966 TV special. Ron Howard knew this and deployed a splashy, flamboyant directorial style, turning the Whos into bombastic, self-absorbed creatures every bit as preposterous as the Grinch himself and teetering between campy excess and surprisingly dark pathos. From the moment James Horner’s score chimes in and Anthony Hopkins begins his narration, Howard chaotically blends Dr. Seuss’ iconic poetry and illustrations with surreal, heightened creations meant to remind us that this is as much a fantasy as it is a reflection of our own reality.

The commentary is sometimes overshadowed by the film’s candy-colored distractions, but it’s there, and it only works because of the choices Howard made. For decades, he has been a reliable storyteller of a certain vision of America (for better or worse), and in How the Grinch Stole Christmas, he boldly stepped away from that vision to critique it. It was a risk that paid off, and the film remains both a whimsical piece of holiday entertainment and a reminder of what makes the season a cause for celebration. Only a Grinch would argue otherwise.

How the Grinch Stole Christmas was released in theaters on November 17, 2000. 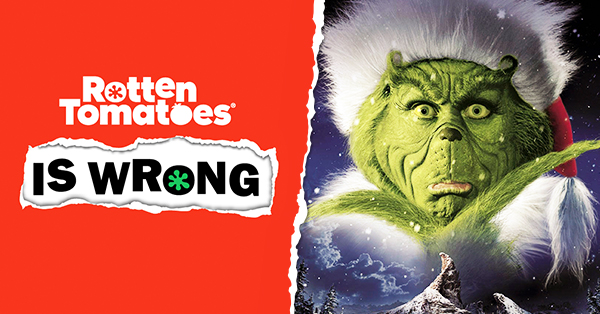 “Rotten Tomatoes Is Wrong” About… How the Grinch Stole Christmas 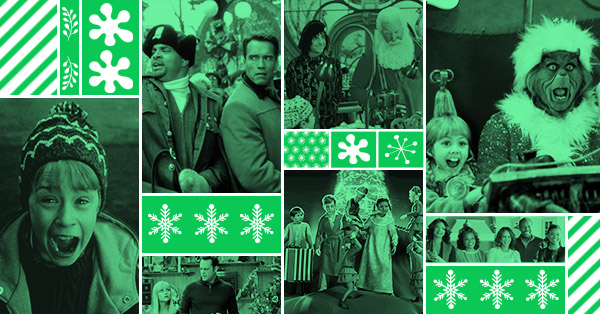