Paul W.S. Anderson's sci-fi horror film wasn't a critical darling, but its unforgettable imagery, standout cast, and escalating thrills have made it a celebrated cult classic for horror aficionados.

The 1997 film Event Horizon and its titular ship have something in common: both disappeared quickly from the public eye, only to reappear later with new life breathed into them. While the film didn’t travel to hell and back, it was released into the hellish cinematic landscape known as August, which until recently was traditionally considered a “dumping ground” for lesser studio fare. It was in and out of theaters in just a few weeks, but something miraculous happened when it found its way to video store purgatory, where movie lovers rediscovered the film and helped build its reputation as an underappreciated, even ambitious horror cult classic.

What’s interesting about Event Horizon is that it all came about on a lark. Director Paul W.S. Anderson was signed on to direct the action film Soldier, but star Kurt Russell needed a year to get into shape, so Anderson had an empty slate and didn’t want to waste any of his Mortal Kombat (1995) momentum while Russell was building his bulging biceps. Anderson remembered Phillip Eisner’s script for Event Horizon, and in a flex move, the 32-year old fledgling director used his recent success to rush the $60 million-budgeted film, branded as “The Shining in Space,” into production at England’s Pinewood Studios. 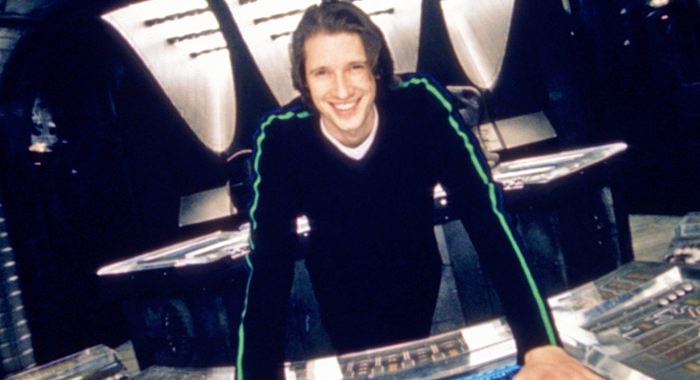 In the span of one year, Anderson and producer Jeremy Bolt built gigantic sets on the famous 007 stage, cast a group of excellent actors, developed impressive special effects inspired by Clive Barker, and released the R-rated gorefest during the summer. The production wasn’t an easy one – a soundstage burnt down due to an out of control fireball, and the production schedule intensified when its release date was moved up to accommodate the delay of Titanic, which left a gap in Paramount’s summer release calendar that needed to be filled.

We’ll be the first to admit that the truncated editing schedule and disastrous early test screenings that forced wholesale edits hurt the final product. But much like Anderson, we’ve grown to love the scrappy horror film because the practical effects and makeup design still make us queasy and the lore around the never-going-to-happen director’s cut has kept it relevant and thriving on Blu-ray and 4K.

Here’s why we think Event Horizon still holds up, a quarter century after its release.

1. It Continues to Influence Pop Culture 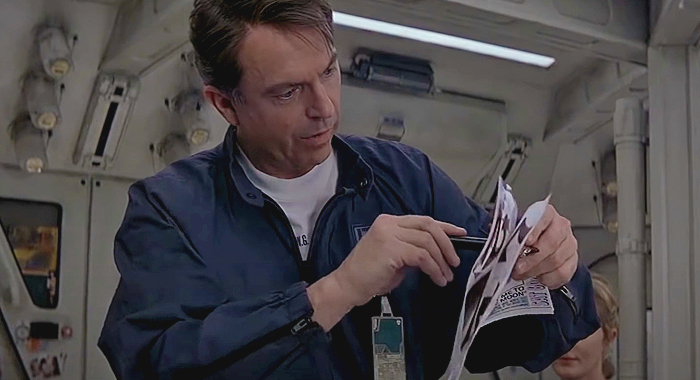 In Thor: Love and Thunder, Natalie Portman’s Jane Foster makes a cheeky reference to Event Horizon as she attempts to explain wormholes. For many longtime fans of the film, it was a whiff of validation for its pop culture relevance, which has been an uphill battle due to the general distaste for Paul W.S. Anderson and the critical and financial drubbing the film suffered upon its release.

The movie isn’t without its faults, of course, but it’s a solid horror romp about a rescue crew trapped inside a haunted spaceship that has been to literal Hell. Anderson drew inspiration from The Shining, Alien, and paintings by Hieronymus Bosch and Pieter Bruegel, and you can clearly see their influences throughout. He has never been shy about the fact that he was a young director who was given a lot of money to make his cinephile dreams come true by showcasing his take on films that inspired him, but the movie also manages to stand on its own.

In one of the interviews on the Shout! Factory Blu-ray of the film, Phillip Eisner shared a story about visiting the set, where he found Anderson atop a mountain of scaffolding that overlooked the gravity drive set. There was a huge smile on Anderson’s face, and the first thing he said to Eisner was a jovial “You did this!” Eisner said it was the best moment of his career, and he was amazed to see how Anderson, his production designer Joseph Bennett (Deep Blue Sea), and cinematographer Adrian Biddle (Aliens) had turned his words into a beautiful, menacing reality.

Like The Shining’s Overlook Hotel, the Event Horizon itself is as much a character as anyone in the cast, and those impressive sets on the cavernous 007 Stage at Pinewood contribute enormously to the film’s atmosphere and sense of scale. While low-budget, high-return horror films from A24, IFC, and Blumhouse currently rule the genre, it’s worth remembering there was a time when a major studio like Paramount was willing to take a risk (admittedly a costly one) and utilize seven Pinewood sound stages to deliver an immersive experience for audiences. Anderson also wanted the Event Horizon to have a biblical feel, so the VFX crew scanned the Notre Dame Cathedral into a computer and used it as a reference to design the spacecraft. It’s little touches like this that make Event Horizon something more than a cheap horror ripoff.

2. Miller and His Crew Are Worth Rooting For 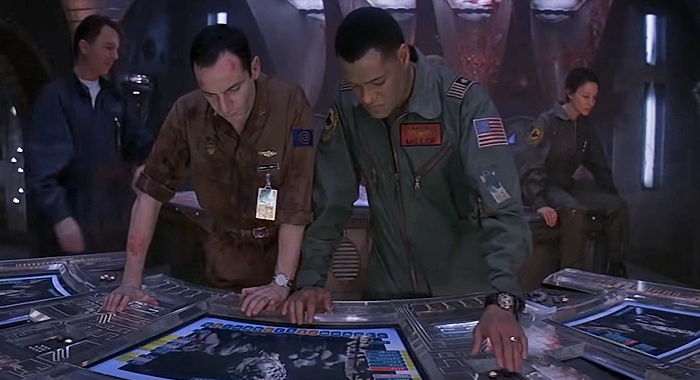 One of the most memorable moments in the film happens after Laurence Fishburne’s Captain Miller and his team witness the graphic recordings of the original Event Horizon crew tearing each other apart during what can best be described as a hellish orgy of horrible things. When the video ends, Miller flatly says without hesitation, “We’re leaving.” In the Blu-ray commentary, Anderson mentions several times that he loves the fact that the stranded characters can’t just escape to a hotel like the family in Poltergeist because their ship is in need of repairs, and that’s what makes their situation so precarious: they can’t leave.

Event Horizon isn’t one of those movies in which would-be victims repeatedly make poor decisions (most of the time, anyway) or end up where they are because they did something wrong. The crew recognize the danger and want to leave, but they can’t, and the audience can relate to their frustration, their desperation, their terror. Also, there is a nice familial bond between the characters, which can be credited to the fantastic cast. These are people who care for each other – Miller’s relationships with Justin aka “Baby Bear” (Jack Noseworthy) and Peters (Kathleen Quinlan) feel genuine, which makes their ultimate fates all the more heartbreaking.

3. Its Grotesque Imagery is Potent and Unforgettable

Twenty-three seconds. That’s how much screen time is dedicated to the two separate visions of Hell from Event Horizon that have become iconic in the horror community. The best way to describe the first vision is by quoting Anderson himself on the commentary track: “[The] orgiastic death scene, where the crew of the Event Horizon, the original crew, basically kind of tear each other apart… while f—ing each other to death, was originally much longer and a lot more gruesome.” The 14-second horror party is brutal but fleeting, and it provides just enough detail to horrify while it leaves a few things to the viewer’s imagination. Anderson went on to say that the original version, with all its gore and special effects involving pus and maggots, made test audiences completely shut down. The same goes for the crew members who spent their weekends corralling entrails and ladling fake blood on actors. Nobody enjoyed the chaos, and that’s why the final version we see in the film works. It’s brief but evocative.

For the visions of Hell during the film’s climax, when a possessed Dr. Weir (Sam Neill) shows Miller how his crew will be tortured, Anderson wanted to achieve a painterly quality, so he used the works of Hieronymous Bosch and Pieter Brueghel for reference. The scene lasts for only nine seconds this time, but the visuals of barbed wire used as a mouth gag and Weir’s mutilated, scored body are seared into everyone’s memory. Once again, Anderson shot the scenes on his off weekends, and he spent a disproportionate amount of time creating disturbing visuals he knew would only be on screen for seconds. He put a lot of work into upsetting audiences, and we respect that, in no small part because it worked like gangbusters.

4. It Makes the Most of Its Horror Film Influences 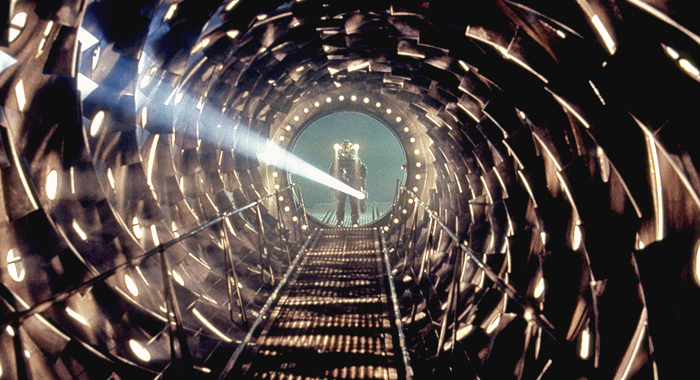 The most common knock against Event Horizon it is that it’s derivative. It’s a fair assessment, and the critics aren’t entirely wrong, though it’s disappointing they chose to focus so much on what Event Horizon pays homage to rather than what it does well on its own merits. Sure, there is a flood of blood (The Shining), a deadly orb (Hellraiser – it’s a cube, but you get it), blue collar space workers getting killed (Alien), and a spacecraft designed to look like the Notre Dame Cathedral (wait, that one’s original). But horror movies borrowing from other horror movies is nothing new; one look at the films of the 1940s, which are great, reveals countless ripoffs, sequels, and reboots.

Plus, as previously noted, Anderson has always been upfront about his influences, and the moments in Event Horizon that call back to other films don’t feel cynical, but celebratory, reverential. It’s worth noting that he had an incredibly hard time finding a production designer for the film because of the time crunch, and hired Joseph Bennett only 10 weeks before filming began. His direction for Bennett was to create sets that nobody had ever seen before. Bennett infused the Event Horizon with Gothic corridors and expansive hallways and even added some stained glass, all on a tight schedule. The end result was an expansive canvas for Anderson to play with, and it proved to be an effective marriage of his inspirations and the film’s unique production design.

5. It Gets Going Quickly and Doesn’t Overstay Its Welcome

When Event Horizon was initially screened for test audiences, with all of its graphic death-orgy footage intact, viewers responded so poorly that Paramount forced wholesale edits. Anderson has stated that he wished he would have shown a tamer version to prevent so many cuts from being ordered, but the truncated editing time forced him to lump all the footage together and hope for the best. In the end, Anderson was forced to cut more than 30 minutes to achieve the film’s 96-minute run time, which admittedly left less time for the audience to get to know the heroes, but also resulted in a breezy chiller that ramped up Weir’s evil turn and delivered thrills in quick succession en route to a satisfying conclusion.

Sure, some of us are morbidly curious to see what sort of unpleasantness Anderson cooked up, but the film works superbly without all the extra carnage. There has been some interest in a director’s cut, which would certainly get more eyes on the film, but it’s unlikely to happen. The original reels were stored in a retrofitted Transylvanian salt mine, which wrecked the footage, and an unsuccessful salvage job further damaged it. Anderson himself doesn’t seem too keen on a director’s cut, either. Remember, he stated that the original footage took people out of the film because it was too depraved and ultimately unnecessary. If anything, what Event Horizon needed was possibly a bit more time with the crew before the insanity kicks off and a slightly less rushed portrayal of Weir’s descent into madness. Stick those in a director’s cut and we’d be all for it. Until that happens – and there’s a near-zero chance it will – we’re perfectly happy with the movie Anderson did give us, even if we didn’t get to see any nails hammered into someone’s teeth (oh yeah, they filmed that).

Let us know what you think about Event Horizon in the comments!

Event Horizon was released in theaters on August 15, 1997.