We count down the best-reviewed work of the Side Effects star.

Over the course of a career spanning two decades and dozens of movies, Jude Law has become one of the most successful actors of his generation — in fact, just a few years ago, he made the industry’s “top 10 most bankable” list. This weekend, he has the honor of starring in the HBO miniseries The Young Pope, which centers on the reign of the first American pope, Pius XIII. To celebrate, we decided to take the opportunity to pay tribute to some of Mr. Law’s biggest critical hits. Of course, given his propensity for smaller parts, we had to prune a few entries from the upper reaches of Law’s Tomatometer; his roles in films like The Aviator, Hugo, and The Grand Budapest Hotel weren’t quite substantial enough to make the grade. Still, we think you’ll find plenty to love in this week’s list. Without further ado… Jude Law’s best movies! 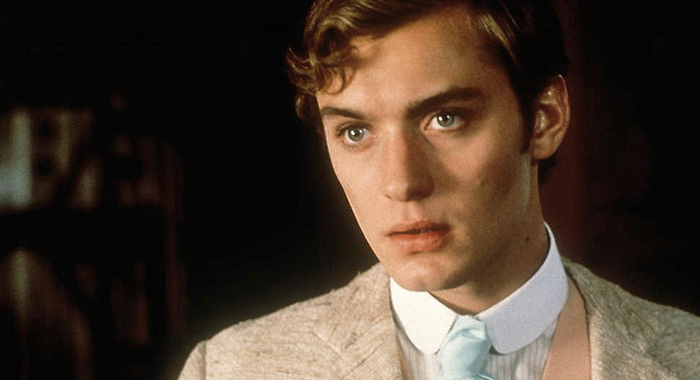 If a person wanted to film an Oscar Wilde biopic, they could hardly do better than Richard Ellmann’s Pulitzer-winning biography for source material — and they couldn’t ask for a more perfect leading man than Stephen Fry, who uses 1997’s Wilde as an acting clinic. In fact, although most critics agreed Brian Gilbert’s film was flawed, they were too enthralled by Fry’s performance — in addition to solid supporting turns from Jennifer Ehle, Michael Sheen, and Law (who plays Lord Alfred Douglas, the self-absorbed object of Wilde’s ultimately ruinous affections) — to find much fault with Wilde. In the words of the Sunday Times’ Shannon J. Harvey, “There’s never been a better story about the misadventures of one of the world’s greatest writers. Fry should have been Oscar nominated, and Law is equally electrifying.” 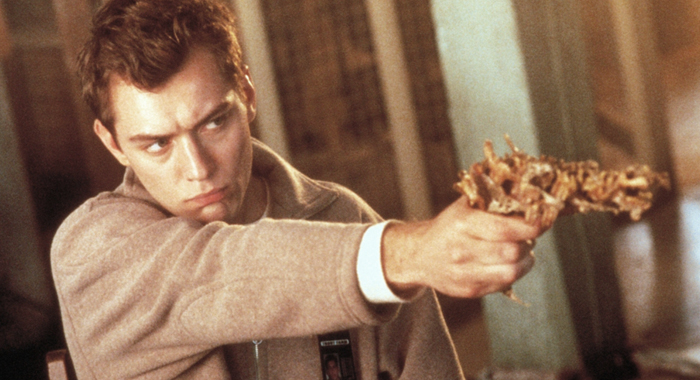 It suffered from close proximity to The Matrix — not to mention an unfortunately spelled title — but most critics thought David Cronenberg’s eXistenZ was one of the more enjoyable, and overlooked, futuristic thrillers of the ’90s. This is admittedly a rather short list (Johnny Mnemonic, anyone?), but still — given Cronenberg’s track record, eXistenZ‘s ignominious commercial fate is a little puzzling. On the other hand, Cronenberg didn’t do himself any favors with a storyline about a game developer (Jennifer Jason Leigh) and a low-level employee at her company (Law) on the run from bad guys wielding freaky guns that shoot human teeth. Sound bizarre? It is, and that doesn’t even take into account the script’s constant shifts between the real world and an increasingly difficult-to-detect virtual reality. Not a film with particularly broad appeal, in other words, but it tickled the neuroreceptors of critics like Jim Ridley of the Nashville Scene, who wrote, “Cronenberg makes leaps of logic, character, and setting so baffling that they don’t become clear until the end. Even then, the final outcome is so devious you’ll sit poking yourself to make sure you won’t disappear with the click of the projector.” 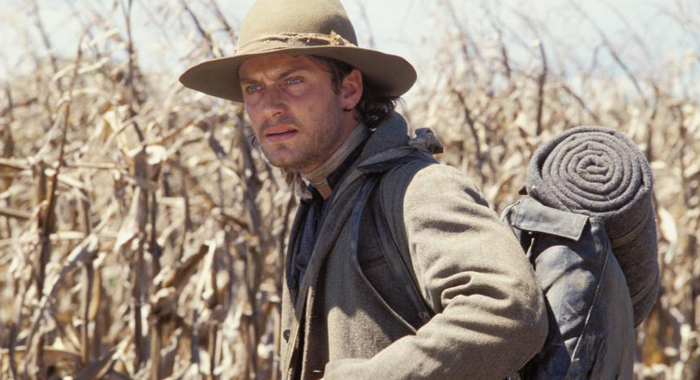 As a book, Charles Frazier’s Cold Mountain was a bestselling phenomenon, and just the kind of sweeping, romantic period piece that cried out for a film adaptation. That cry was answered with Anthony Minghella’s stately take on the tale of a Confederate Civil War soldier (Law) who deserts and slowly wends his way back to his beloved (Nicole Kidman) while dodging Union troops and the southern Home Guard. Released on Christmas Day 2003, the Cold Mountain movie was a $173 million hit, but not without its detractors; Cinema Crazed’s Felix Vasquez Jr., for instance, called the Miramax production “So utterly manufactured for Oscar, it was nauseating.” Still, most critics were willing to look past the flaws in Minghella’s beautifully filmed epic; in the words of Philip Martin of the Arkansas Democrat-Gazette, “There are intimations of a genuinely moving film; in its best moments, Cold Mountain is a fantasy that — like the Lord of the Rings movies — aspires to Shakespearean heights.” 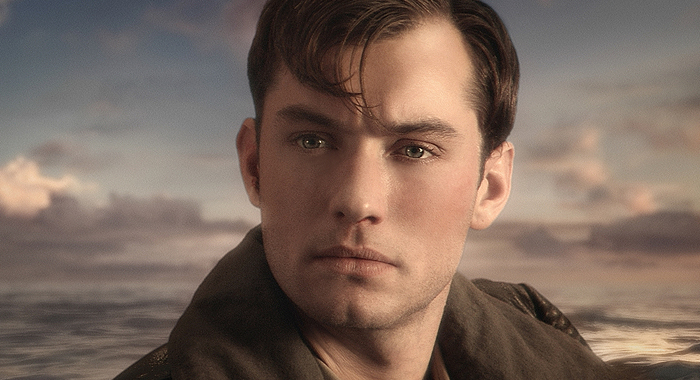 One of a mind-boggling six movies Law starred in throughout 2004, Kerry Conran’s Sky Captain and the World of Tomorrow was sort of a beta Avatar, combining live action and computer-generated effects in new and exciting ways. Adding to the gee-whiz factor was Conran’s gleefully retro storyline, which pitted the heroic Sky Captain (Law, natch) against the giant robot army of the nefarious Dr. Totenkopf (Sir Laurence Olivier, in a display of technology both thrilling and sort of creepy) in an alternate version of 1939. Captain mimicked the Golden Age matinee serials so successfully that many modern filmgoers didn’t quite know what to make of it, and as a result, it went the fate of Totenkopf’s army at the box office — but it was welcomed with open arms by critics like Ed Park of the Village Voice, who wrote, “His nostalgia enabled by technology, Conran takes the ghosts in his machine seriously, and the results appear at once meltingly lovely and intriguingly inhuman.” 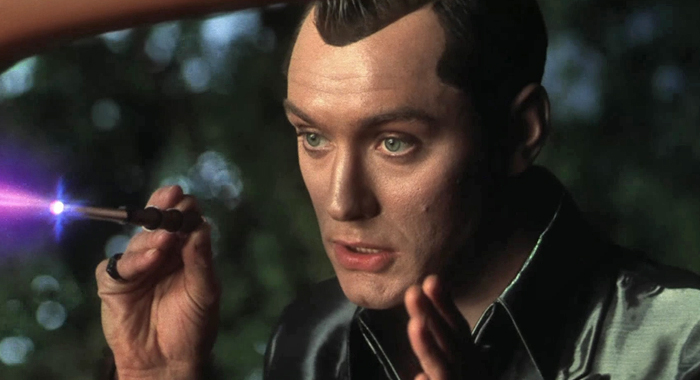 A project Stanley Kubrick had been working on since the early 1970s, A.I. was the Hollywood equivalent of vaporware for years; even after Kubrick handed the reins to Steven Spielberg in 1995, the movie remained largely in stasis until Kubrick’s unexpected death in 1999. As has been the case with more than one sci-fi epic (see: Avatar), the delay was at least partially fortuitous — by the time production started in earnest, special effects had evolved to the point where the tale of a robot boy (Haley Joel Osment) on his quest to become real could be believably told. A.I. was criticized for its uneasy blend of darkness and sentimentality, exemplified by Osment’s character’s friendship with Gigolo Joe, the prostitute robot played by Law. Despite grossing more than $230 million, A.I. was regarded by many as a disappointment — but most critics saw through the catcalls, including Jimmy O of Film Snobs, who wrote, “A.I. stands as a work that allows us to see ourselves in the things that we have created. For good or for bad, it is an eye-opening experience.” 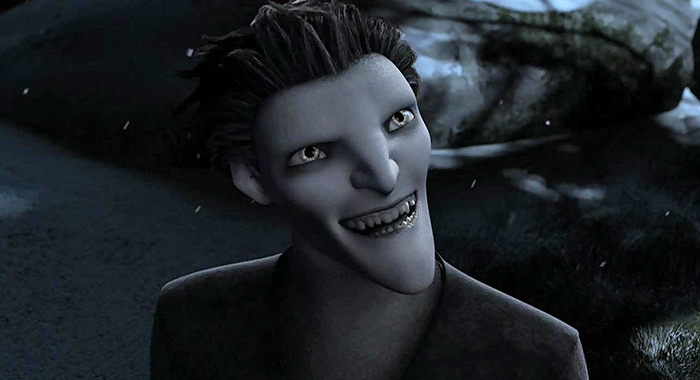 Adapted from the Guardians of Childhood series authored by writer and illustrator William Joyce, Rise of the Guardians took the novel premise of the books — basically, that magical kids’ legends like Santa Claus and the Tooth Fairy are members of an Avengers-like team of action heroes — and used it as the basis for a colorfully animated adventure with an all-star voice cast that included Alec Baldwin, Isla Fisher, Hugh Jackman, Chris Pine, and Law as the group’s deliciously evil adversary, Pitch the Nightmare King. Although this would-be franchise starter was regarded as a box office disappointment, it resonated with a good number of critics — including the Atlantic’s Christopher Orr, who called it “A children’s fable reimagined as a superhero flick — a peculiar but delightful hybrid that just may be the best animated offering of the year.” 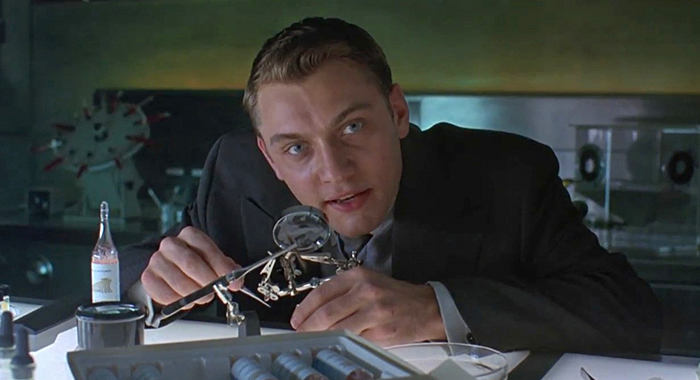 In 1996, Dolly the sheep made headlines as the first cloned mammal, sending previously sci-fi-worthy topics like genetic engineering and eugenics to the forefront of public debate. You’d think that would make an instant smash out of a futuristic thriller about a man hiding behind someone else’s genetic identity — Columbia Pictures certainly thought so — but Andrew Niccol’s Gattaca still went down as one of 1997’s more notorious flops. Ethan Hawke starred as Vincent Freeman, a genetic “in-valid” who flouts the rules preventing him from joining the space program by buying off Jerome Morrow (Law), a paraplegic ex-swimmer with perfect DNA, setting in motion a chain of events that puts Freeman on a collision course with a squad of detectives led by his own brother (Loren Dean). It’s undeniably juicy stuff, and it was greeted with critical applause, but audiences weren’t interested for some reason — a disappointment for scribes like James Sanford, who called it “a smart, beautifully crafted piece of not-so-science-fiction that manages to successfully mix social commentary and suspense into a generally enthralling story.” 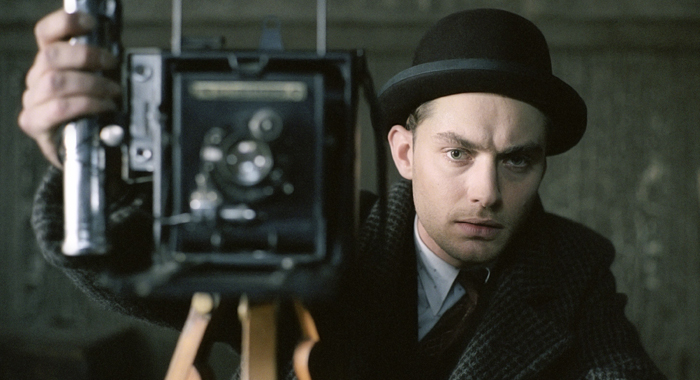 Tom Hanks as a ruthless Mafia assassin? It sounds like a sketch Saturday Night Live might have aired after Forrest Gump, but Sam Mendes’ Road to Perdition was no joke — particularly not in the casting department, which surrounded Hanks with rock-solid supporting players like Paul Newman, Daniel Craig, and Jude Law as Harlen Maguire, the crime scene photographer/icky hitman hired to murder Hanks and his young son (Tyler Hoechlin). The only one of the movie’s characters not adapted from Max Allan Collins and Richard Piers Rayner’s graphic novel, Maguire could easily have provoked a negative response from fans of the book — but Law made a great, creepy villain, mussing his good looks behind sallow skin and bad teeth. Ken Hanke was one of the many critics who enjoyed Road, writing “It’s all done with tremendous style and backed by exceptional performances. Jude Law and Paul Newman are both brilliant and chilling, but the real revelation is Tom Hanks.” 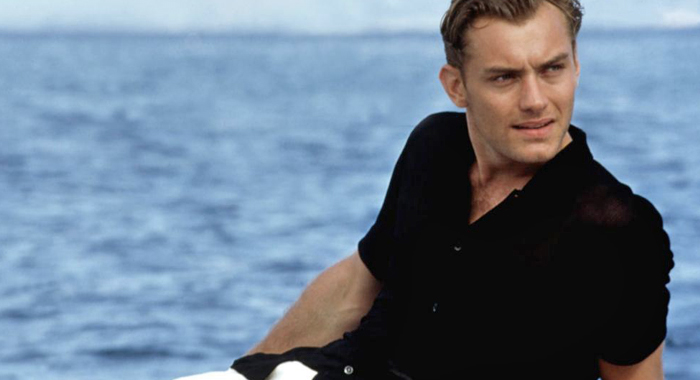 Matt Damon got a lot of attention for his performance in the title role — and deservedly so — but The Talented Mr. Ripley revolves around the machinations of a sociopath who finds himself irresistibly drawn to a casually cruel, devastatingly handsome playboy, and who better to play that part than Jude Law? The BBC’s Stella Papamichael was one of several critics who singled out Law’s performance, saying “In a starry lineup, it’s Jude Law who commands most presence, playing the charmer so well that his absence in the latter half leaves a gaping void.” Anthony Minghella’s adaptation of the Patricia Highsmith novel had a lot of pitfalls to avoid on the way to the screen, and it didn’t sidestep all of them; still, 83 percent on the Tomatometer and a small boatload of awards (including Law’s BAFTA and Blockbuster nods) is pretty impressive for a deeply unsettling Christmas release with amoral, misanthropic overtones. Calling it “a gorgeously unsettling film,” New York Magazine’s Peter Raniner warned, “You can hide in the shadows, but luminescence exposes who you are, and the only escape is into another identity.” 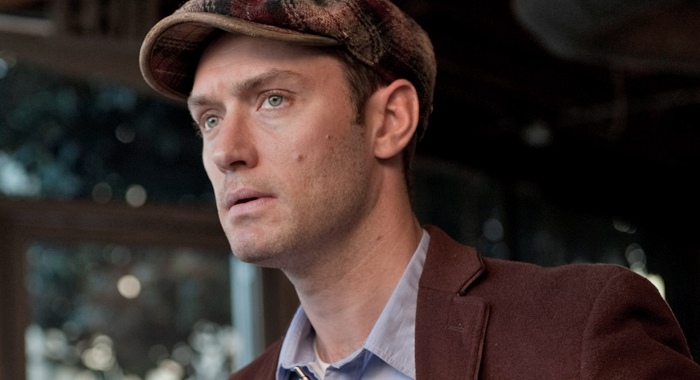 Before they hooked up for Side Effects, Law and Steven Soderbergh worked together in Contagion, a chilly 2011 medical thriller that uses our ever-more-connected modern lifestyle as a framing device to demonstrate just how quickly and easily a contagious disease could spread across the planet. With a showy cast that included Matt Damon, Kate Winslet, Laurence Fishburne, and Gwyneth Paltrow, Contagion ran the risk of undermining its dramatic impact with a parade of famous faces, but as David Denby argued for the New Yorker, “The presence of movie stars helps: their authority is part of what keeps us fascinated by the gruesome fable, juicing it a bit, so that we can actually enjoy it.”