The Jungle Book Runs Wild Over the Competition

Barbershop: The Next Cut and The Boss round out the top three. 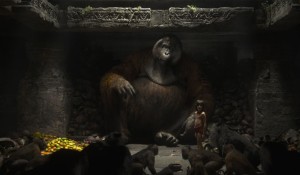 Crushing industry expectations and proving once again that summer numbers can happen in spring, Disney’s The Jungle Book opened at number one with a humongous $103.6M, according to estimates. The PG-rated adaptation of the popular Rudyard Kipling story averaged a massive $25,712 from 4,028 theaters. 3D and IMAX screens contributed heavily for this VFX-driven visual feast.

It was the second largest April opening weekend of all-time trailing only the $147.2M of last year’s Furious 7. The Jungle Book also generated the seventh best debut in history for a non-sequel which was especially impressive. The studio has used spring in the past for epic live-action stories for families most notably with 2010’s Alice in Wonderland starring Johnny Depp which bowed to $116.1M and last year’s Cinderella with Cate Blanchett which debuted to $67.9M.

The weekend kicked off with $32.4M on Friday including $4.2M from Thursday night pre-shows. Saturday rose 27% to $41.1M while Sunday is projected to drop by an optimistic 27% to $30M. March Disney titles Cinderella and Oz The Great and Powerful declined by 33-34% on their first Sundays.

Jungle Book did not have any known stars on screen but the CG-heavy film did offer the voice talents of Bill Murray, Ben Kingsley, and Idris Elba as the computer-generated animals. Broad appeal brought in all audiences and while younger children may have been scared away by the promise of animal attacks, the non-family crowd more than made up for the loss as they showed up just as much as the family audience did.

Reviews were fantastic for the Jon Favreau-directed pic and paying customers were very pleased as evidenced by the glowing A grade from CinemaScore. The road ahead is promising and breaking the $300M domestic mark is very possible. If it reaches that height, The Jungle Book will become the fourth 2016 hit to do it following Deadpool, Batman v Superman, and Zootopia – all before the May kickoff of the summer movie season.

After a few international markets opened a week earlier, The Jungle Book stormed into its major global launch this weekend and saw fantastic grosses everywhere. The weekend delivered a stunning $136.1M from 49 territories, both new and holdover, pushing the offshore total to $187.4M and the global gross to $291M. China rocked to a $50.3M opening weekend easily leading all markets. After ten days in India, Book took in $20.1M making it the third biggest Hollywood hit of all-time there after Furious 7 and Jurassic World. With strong buzz worldwide plus Korea and Japan still to open, The Jungle Book has a shot at joining the billion dollar club.

Ice Cube’s second comedy sequel of the year, Barbershop: The Next Cut, debuted in second place with an estimated $20.2M from 2,661 locations for a solid $7,595 average. The PG-13 pic from MGM and Warner Bros. was the first chapter in a dozen years for this franchise and came in below the $20.6M of 2002’s Barbershop (from a thousand fewer theaters) and the $24.2M of its 2004 sequel. Reviews were positive and audiences also were happy as the CinemaScore grade was a good A-. Studio research showed that the audience was 54% female and 66% over 25.

Melissa McCarthy’s latest comedy The Boss fell sharply in its second weekend dropping 57% to an estimated $10.2M pushing the cume to $40.4M. Bad buzz is causing this one to fade fast and a final of about $65M seems likely. That’s not bad for a film that cost only $29M. However, it ranks last among McCarthy’s star vehicles as she is normally capable of drawing a larger audience. She hits the screens again this summer in the reboot of Ghostbusters.

Warner Bros. suffered another sharp fall for its comic book epic Batman v Superman: Dawn of Justice which fell 61% to an estimated $9M in its fourth weekend. The domestic cume rose to $311.3M cracking the all-time domestic Top 50. Negative buzz has led to rapid erosion despite a massive start. Look for a final North American total of near $330M making the opening weekend account for a whopping 51% of the sum.

Overseas audiences are also moving on to other films. Justice grossed an estimated $15.1M from international markets this weekend, dropping 56%. The cume now sits at $516M led by China’s $95M. All markets have opened so a final global tally of about $880M seems likely with the colossal opening weekend repping a very high 48% of the pie. While definitely not a failure, this result is disappointing given the size of the first weekend and the fact that two of the most iconic super heroes of all-time were put together on screen for the first time, along with a heavily-promoted third popular character.

2016’s highest-grossing worldwide blockbuster followed as Zootopia slipped 43% to an estimated $8.2M in its seventh weekend in the top five. With Disney launching another major family tentpole, the decline was the largest yet for the bunny cop toon. Domestic climbed to $307.5M. International grosses rose to $574.8M led by China which is nearing the end of its run with a jaw-dropping $234.2M. The worldwide tally now stands at $882.3M with Japan set to open next weekend. That market has seen tremendous grosses for Disney toons and should send Zootopia right into the billion dollar club.

With Zootopia in March, The Jungle Book in April, Captain America: Civil War in May, and Finding Dory in June, Disney could have in its stable billion-dollar grossers in each of four consecutive months. Add in Marvel’s Doctor Strange, the Thanksgiving weekend toon Moana, and Rogue One: A Star Wars Story and the Mouse House’s many lucrative divisions could give the studio its best box office year in company history. A key component has been high quality products.

The new Kevin Costner actioner Criminal failed to excite moviegoers opening in sixth place with only $5.9M, according to estimates. The R-rated Lionsgate release was panned by critics and averaged just $2,180 from 2,683 theaters.

The top ten films grossed an estimated $165.5M which was up 52% from last year when Furious 7 stayed at number one for a third time with $29.2M; and up 42% from 2014 when Captain America: The Winter Soldier remained in the top spot over the Easter frame with $25.6M.