Ten Years On, Tropic Thunder's Still a Brutal Kick In Hollywood's A-- 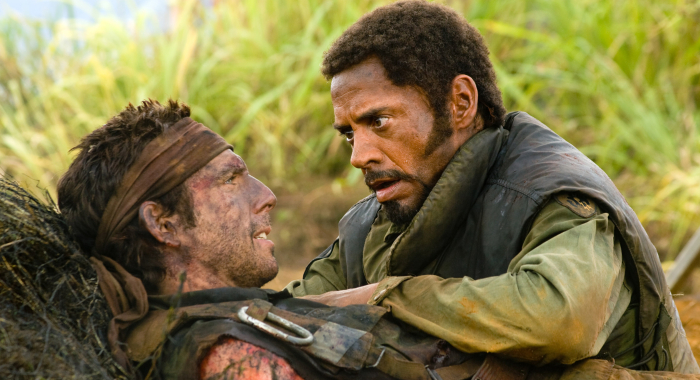 In 2008, Tropic Thunder hit screens like a dynamo, shocking audiences with its stunt casting and blunt satire and racking up $110.5 million in domestic box office receipts. Ten years on, it still stands out as an audacious and controversial piece of American comedy – and we’re digging into why.

Performances are one thing, substance is another. Tropic Thunder might have been just another big studio comedy when it landed in theaters on August 13, 2008, but it had weight to it and stuck in our memories in a way that few comedies-of-the-week do. Here are some of the reasons it cut through, and holds up.

1. It Surpassed Some Of Its Most Notable Influences

Chances are, you’ve seen 1999’s Galaxy Quest, a Star Trek parody so funny, rich, and solid that some Trekkies even hold it among the canonical Star Trek movies. (Critics liked it too – it sits at 90% on the Tomatometer.) The film told the story of a band of down-and-out actors from a Star Trek-like series who are forced to play their TV roles when they’re kidnapped by a beleaguered alien race that thinks their TV reruns are real-life documentaries. Chances are, too, that you’ve herd of Three Amigos!, released 13 years earlier, which also saw a band of actors mistaken for their onscreen characters, this time South of the Border. The two films’ influence on Thunder – in which, yet again, the story of actors mistaken for their characters is used to skewer aspects of the movie-making business – is such that some online writers have dubbed them an unofficial trilogy. The trilogy’s finale, though, takes its satire to the darkest place: the very heart of the dream factory.

If Galaxy Quest captured Star Trek and its surrounding culture in a nutshell, Tropic Thunder captured Hollywood itself. Stiller’s script held a funhouse mirror to his contemporary actors, portraying its entitled prima donna actor characters with zero self-awareness about themselves, their peers, or their impact on audiences. More, Stiller held that same mirror to the Hollywood industrial complex, with the characters’ agents being varying degrees of oblivious, short-tempered, and manipulative. Despite all this, nearly every character in Tropic Thunder learns to get over themselves in a Sullivan’s Travels sort of way (yep, it even had a very Hollywood ending). While Galaxy Quest posits that even disposable entertainment has intrinsic value, Tropic Thunder argues that most folks in Hollywood, while often misguided, ultimately have the best intentions at heart.

Well, everyone but Les Grossman.

The mid-2000s were rough for Tom Cruise’s image. Mission: Impossible III didn’t exactly light up the box office, Lions for Lambs bombed outright, and then there was the Oprah couch incident. It seemed like the impossible had happened: Cruise’s star was fading. That was until his explosive performance as Hollywood agent Les Grossman in Tropic Thunder. Rumored to be based on Harvey Weinstein, Grossman was a hilarious, over-the-top deconstruction of the stereotypical Hollywood executive: brash, profane, arrogant, egotistical, manipulative, greedy, and grandiose. He might be a bit much to swallow – and a bit harder to watch, given what we know about the man who some say inspired him – but his meme-able dance moves go down smooth.

Robert Downey Jr.’s portrayal of Kirk Lazarus, who plays the black Sergeant Lincoln Osiris in the movie-within-the-movie, is one of Tropic Thunder’s most memorable — and infamous — elements. Already riding a big career uptick following 2005’s Kiss Kiss, Bang Bang and 2007’s Zodiac, Downey Jr. had a truly banner year in 2008 with the releases of Iron Man and Tropic Thunder. The actor proved he could lead a blockbuster with the MCU’s first entry, but Tropic Thunder reminded people that he also had range to spare. It was an uproarious and uncomfortable satire of Hollywood whitewashing and the industry’s often problematic casting decisions – and let’s face it, one that is still relevant today.

4. IT HELPED KICK OFF THE MCCONAISSANCE

Make no mistake, we were riding the Matthew McConaughey train well before Tropic Thunder – he was a rom-com king in Failure to Launch, How to Lose a Guy in 10 Days, and Fool’s Gold, and he gave us a decent villain in the apocalyptic Reign of Fire. But he was rarely given serious consideration for roles that were, shall we say, more challenging. He changed that perception in Tropic Thunder playing Rick Peck, a comically oblivious agent who was absolutely hellbent on getting his client a TiVo. From there, McConaughey enjoyed a string of successes including Mud, Magic Mike, and Dallas Buyers Club, and notably on TV’s True Detective. Prior to Tropic Thunder, he starred or appeared in just five Certified Fresh movies across a span of 15 years; in the 10 years since the movie’s release, he’s been in nine.

5. IT WAS WOKE AS HELL, ESPECIALLY FOR THE TIME

Another infamous element of Tropic Thunder? Ben Stiller’s action star Tugg Speedman formerly played the titular character in Simple Jack, an in-universe critical-and-financial failure centered on a young man with learning disabilities. As with the Tropic Thunder‘s treatment of blackface, the concept of Simple Jack held Hollywood’s feet to the fire, skewering the way able-bodied actors have portrayed people with disabilities to earn those awards-season accolades. Tropic Thunder also featured Brandon T. Jackson as Alpa Chino, a hyper-masculine – but closeted – rapper-turned-actor. When he accidentally comes out to his co-stars, he is met only with encouragement. We also got to see Chino with his boyfriend at the end of the film in a heartwarming moment.

The 2000s saw their share of important comedies, with Superbad, The 40 Year Old Virgin, and Knocked Up digging into a number of issues on the tip of people’s tongues, but Tropic Thunder cracked the egg of Hollywood itself. For that – and for its rollicking deconstructions of entitlement, race, fame, the creative process, and self-actualization – it won’t soon be forgotten.