Solo May Be Too Intense for Your Kids, So Here Are 3 Star Wars Alternatives

The only big release this weekend is Solo: A Star Wars Story, and if you’ve introduced your kids to the Star Wars universe, chances are they’re going to be interested in this one. That said, it may not be entirely suitable for the youngest viewers, so Christy offers up three much more family-friendly alternatives within the Star Wars universe that should be just as satisfying to watch at home.

If you love hearing about how many parsecs it took Han Solo to make the Kessel Run, this is the movie for you. It’s an origin story, showing us how one of the most iconic characters in the galactic saga became the swaggering rogue we’ve come to know and love. Alden Ehrenreich (Hail, Caesar!) stars as the young Han, a plucky street urchin who dreams of becoming an ace pilot. Ron Howard’s film shows us how Han meets the gambler and raconteur Lando Calrissian (a charming Donald Glover), teams up with his loyal Wookiee pal and co-pilot, Chewbacca (Joonas Suotamo), and acquires the Millennium Falcon, the legendary ship that will factor so prominently in so many subsequent adventures. This probably all sounds fun, and it is; Solo is one of the lighter Star Wars films in recent years. But it also has some major action sequences that could be too frightening for very young viewers. After surviving a Dickensian childhood on the streets, Han signs up for the military, where he’s involved in some intense battles. He then joins a group of criminals (led by Woody Harrelson) for a daring train heist, which not everyone survives. Some characters are killed, while others sacrifice themselves. It’s the film’s most thrilling sequence. Later, he and his crew on the Millennium Falcon traverse some dangerous territory in space, which includes trying to evade a ferocious, tentacled monster. And Han tries to outwit a fearsome crime lord (Paul Bettany), whose face flashes with bloody red slashes when he gets angry. It’s easy to see why your kids would want to see Solo – especially if they’re already big Star Wars fans, like my 8-year-old son is – but this might be too much to handle for viewers much younger than that.

If Solo seems too intense for your kids – but they’re understandably curious about the Star Wars universe – here are some entryways that might be more family-friendly.

You may as well start from the very beginning – at least, in the order in which the original films came out. The first Star Wars movie is a complete blast, full of swashbuckling adventures, cheeky droids and snappy banter. Its visual effects look very of-its-time; after all, Star Wars does take place a long time ago in a galaxy far, far away. The aesthetic is tactile and rough-hewn, not shiny and perfect, which gives the film as a whole an accessibility that’s missing in George Lucas’ CGI-heavy prequels. Luke Skywalker (Mark Hamill), Princess Leia (Carrie Fisher) and Han Solo (Harrison Ford) are young and full of promise here, the droids R2-D2 (Kenny Baker) and C-3PO (Anthony Daniels) provide plenty of comic relief amid the heroics, and “big walking carpet” Chewbacca (Peter Mayhew) is always good for a wail and a laugh. Even Darth Vader won’t seem scary at this point, given that he’s probably all over lunchboxes and backpacks (and T-shirts and hoodies…) at your kids’ schools. Fine for viewers around 5 and up.

Whether or not they’re ready for The Empire Strikes Back in between, your kids will be just fine watching what was – at that point – the end of the Star Wars saga. One word: Ewoks. This time, Lucas co-wrote the script with Lawrence Kasdan, with Richard Marquand directing, and he was at his most playful. Return of the Jedi tends to lapse into the cuddly and silly, for better and for worse. It still features a lot of action, including thrilling speeder bike chases through the forest moon of Endor. The climactic father-son showdown between Luke and Darth Vader is both intense and emotionally satisfying. And the hulking bad guy Jabba the Hutt may seem like an intimidating force at first, but he’s also such a ridiculous figure that he’s likely to inspire giggles. But the film’s furry inhabitants are what make Jedi so kid-friendly. Expect plenty of Ewok antics as well as an overall cartoonish tone – especially in the interactions between Leia and Han. Fine for kids around 6 and up.

This smart, exciting and well-acted television series is a great way to introduce your kids to the larger Star Wars universe. The fact that it’s animated might make it more appealing in some ways. Rebels lasted for four seasons and takes place chronologically between Episodes III and IV, just as the Empire is gaining strength in the galaxy. The series recently wrapped up, so you could very easily start at the beginning and follow the episodes through to the end for a satisfying journey. It follows a group of rebels (voiced by Taylor Gray, Freddie Prinze Jr. and Tiya Sircar, among others) on a freighter ship who conduct secret operations against the Galactic Empire. The main character, Ezra, is a scrappy orphan teenager who has the makings of a great Jedi. There are plenty of brave and strong female characters, too, which is one of the many factors that make it worthwhile. But Rebels also features some intense battles with lightsabers and blasters. I recommend this show highly for viewers around 7 or 8 and older. 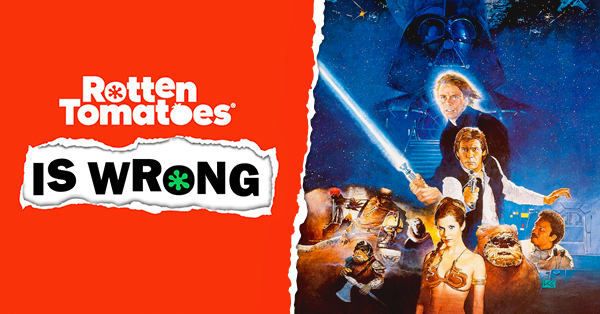 “Rotten Tomatoes Is Wrong” About… Star Wars: Return of the Jedi