Ready Player One Is Certified Fresh

Plus, The Terror and Roseanne are Certified Fresh, and Tyler Perry's Acrimony and God's Not Dead: A Light in Darkness weren't screened for critics.

This weekend at the movies, we have Spielberg surfing ’80s nostalgia (Ready Player One, starring Tye Sheridan, and Olivia Cooke), Tyler Perry‘s latest Tyler Perry movie (Tyler Perry’s Acrimony, starring Taraji P. Henson and Lyriq Bent), and our latest assurance that the Almighty’s still hanging in there (God’s Not Dead: A Light in the Darkness, starring John Corbett and Jennifer Taylor). What are the critics saying? 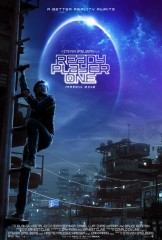 In 2011, author Ernest Cline hit the bestseller charts with his book Ready Player One — a sci-fi adventure blending dystopian futurism, ’80s and ’90s nostalgia, and the basic plot of Charlie and the Chocolate Factory into a story that was pretty much begging for the big-screen treatment even before its impressive sales made an adaptation inevitable. Now the Ready Player One movie is finally here, courtesy of the best director for the job: Steven Spielberg, a guy whose filmography helped shape the era that looms large over the nostalgia-drenched action. Tye Sheridan stars as Wade Watts, a kid who escapes his hardscrabble existence by tooling around the VR network known as OASIS — a hugely popular diversion whose creator (Mark Rylance) has died and left behind an Easter egg bestowing complete control and unfathomable wealth to its finder. Naturally, a worldwide competition to unearth the egg ensues, with Wade in the midst of an increasingly perilous quest to beat countless competitors (including Ben Mendehlson as the CEO of a company bent on overtaking OASIS) while testing his encyclopedic knowledge of the pop culture of yore. It’s the type of thing that sits squarely in Spielberg’s wheelhouse, even if it depends on mashing the nostalgia button in a way that triggers those old endorphins just as often as it invites criticism that Hollywood has run out of ideas. Fortunately, the pundits say that even if Ready Player One isn’t exactly breaking new ground, it’s a perfect vehicle for Spielberg’s particular brand of storytelling — and even if you don’t catch every reference embedded in the movie, it still adds up to a fun adventure that earns its place in the director’s oeuvre. 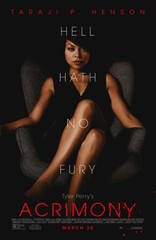 We’ve been here before, Tyler Perry fans. A new Perry film, led by one or more talented stars (in this case, Taraji P. Henson and Lyriq Bent), telling a story ripe with possibility for the sort of rich melodrama that’s helped make this writer-director a thriving industry unto himself — all of it sadly lacking enough reviews to offer any kind of clear idea as to what the critics might think. Of course, bad reviews never stopped a Tyler Perry movie from making bank at the box office, and even if the critics have their knives out for Tyler Perry’s Acrimony, there’s no reason to think audiences will turn down the opportunity to watch the story of a woman (Henson) who may have finally had enough when she learns that her husband (Bent) has been fooling around. Until we find out for sure, how about a round of Tyler Perry’s Guess the Tomatometer? 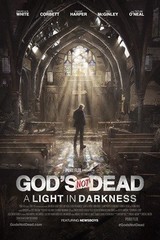 Fans of faith-based cinema have been faced with a bounty of choices lately. Two weeks ago, I Can Only Imagine arrived in theaters; last week, Paul, Apostle of Christ made its way to the cineplex; and this weekend, they’re followed by the third installment in Pure Flix’s God’s Not Dead trilogy, God’s Not Dead: A Light in Darkness. As with the previous two chapters, the cast includes Pure Flix co-founder David A.R. White as Reverend Dave, and he’s joined here by returning God’s Not Dead vet Shane Harper, reprising his role as Josh Wheaton to help tell the story of a congregation forced to rebuild after their church building burns down. As for how the franchise is holding up with the critics this time out, it’s unfortunately too soon to say — only a few reviews are in as of this writing. While we wait for more, let’s play Prophesize the Tomatometer!

A thriller wrapped in a prestige drama package, The Terror makes for gripping, atmospheric supernatural horror.