We count down the best-reviewed work of the Murder on the Orient Express star.

There’s no shortage of celebrity wattage in Kenneth Branagh’s Murder on the Orient Express remake, but of all the rising stars and seasoned vets who turned out for the acclaimed writer-director’s coming out party as Hercule Poirot, we might be most excited to see Michelle Pfeiffer. Capable of exuding a heart of gold or convincingly portraying a femme fatale (sometimes even within the same scene), she’s perfect for a murder mystery, and she’s got a long list of celebrated features to prove it. We’ve rounded up some of the best, and you know what that means — it’s time for Total Recall! 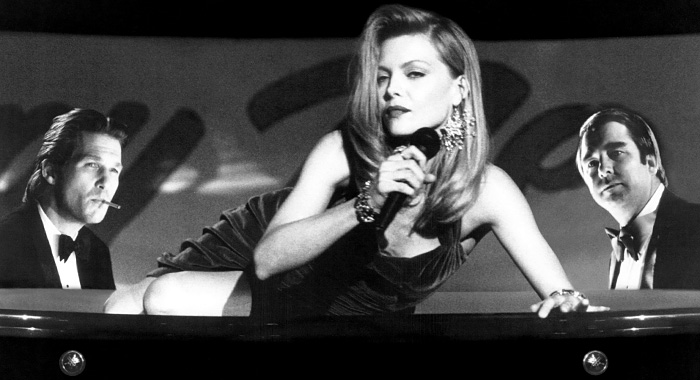 We like to complain about the lack of original ideas in Hollywood, but The Fabulous Baker Boys is proof positive that you don’t need to do something new to make a great movie — you just need to do something really, really well. And Baker Boys does a few things well, actually — including exploring the tension between a pair of piano-playing brothers (played by real-life siblings Jeff and Beau Bridges), the fading hopes of musicians resigned to pursuing commerce instead of art, and — perhaps most importantly — highlighting the luminous beauty of Michelle Pfeiffer. It wasn’t a huge commercial hit at the time of its release, but it was profitable, and the overwhelmingly positive critical reaction has since been shared by the many millions who have seen it at home. “The Fabulous Baker Boys is like a beloved movie from the glory days of Hollywood,” wrote Rita Kempley of the Washington Post. “It transports you. It’s an American rhapsody.” 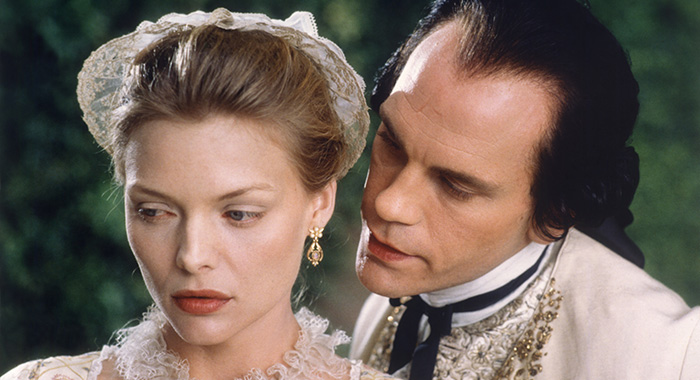 Director Stephen Frears made his grand Hollywood entrance with this adaptation of the Christopher Hampton play Les liaisons dangereuses (and the 18th-century novel it was based on), gussying up a star-studded American cast in corsets and powdered wigs, then setting them loose to do horrid things to one another. John Malkovich is at his most impeccably loathsome as the womanizing Valmont, who joins forces with the scheming Marquise de Merteuil (Glenn Close) to defile her cousin’s daughter (played by Uma Thurman). Liaisons is a tragedy, so you know it’ll all end in a mess of death and confusion — but getting there is a delicious good time involving oodles of etiquette, Pfeiffer at her most radiant, and a side helping of Keanu. A triple Oscar winner, Dangerous Liaisons blended starchy pre-Victorian propriety with good old-fashioned gettin’ down — a mixture that is, in the words of the Washington Post’s Hal Hinson, “Tantalizingly wicked — watching it makes the color rise to your cheeks.” 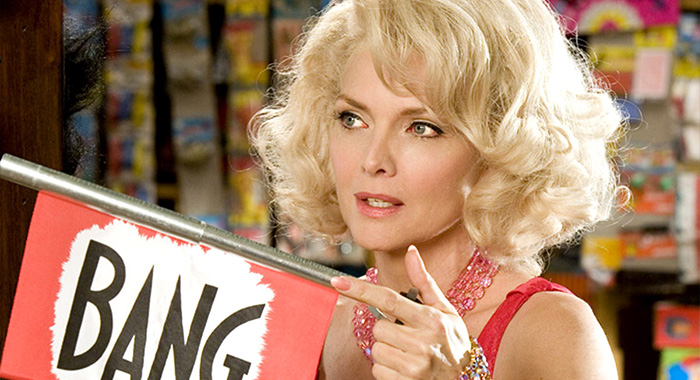 A screen adaptation of a Broadway musical that was itself an adaptation of John Waters’ 1988 comedy, Hairspray certainly had tangled roots — but even if its origins made it look like a cash grab, the end result proved to be a sweetly effervescent musical comedy with a better-than-average cast that was led by an irresistible Nikki Blonsky and rounded out by Christopher Walken, John Travolta in drag, and Pfeiffer as the perfectly named Velma Von Tussle. Although she’s always been primarily known for her acting, Pfeiffer’s musical roles have been some of the most attention-getting of her career — she broke out in Grease 2, enchanted audiences in The Fabulous Baker Boys, and stole the show all over again in this updated version of Hairspray with her performance of “(The Legend of) Miss Baltimore Crabs.” “Enjoyable movies are released every week,” conceded the San Francisco Chronicle’s Mick LaSalle. “But movies that have the capacity to delight — movies like Hairspray — are few and far between.” 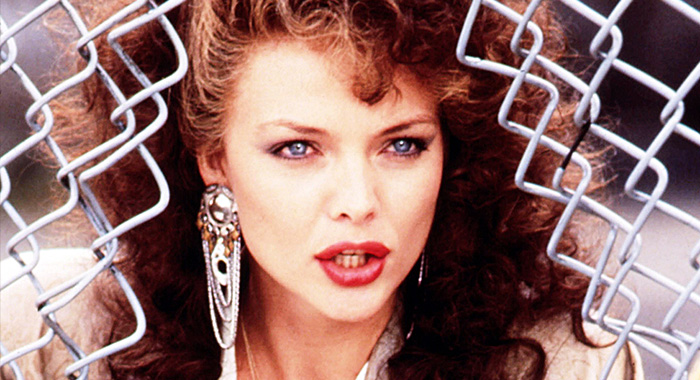 Pfeiffer earned her first Golden Globe nomination for her work in this Jonathan Demme comedy, which continued her ’80s hot streak by putting her in the heels of a fed up Mafia wife who sees her way out of the family after her philandering husband (Alec Baldwin) is killed by his boss (Dean Stockwell) — but then finds herself drawn back in when the boss develops a thing for her and she becomes the unwitting pawn of an FBI agent (Matthew Modine) determined to bring the operation down. With Demme at the reins, the screwball comedy became one of the year’s better-reviewed sleeper hits — and Pfeiffer was singled out by critics like Janet Maslin of the New York Times, who wrote, “Miss Pfeiffer, who looks utterly ravishing in outfits that set the teeth on edge, turns Angela’s plight into something funny, but she seems eminently sane even when the movie does not.” 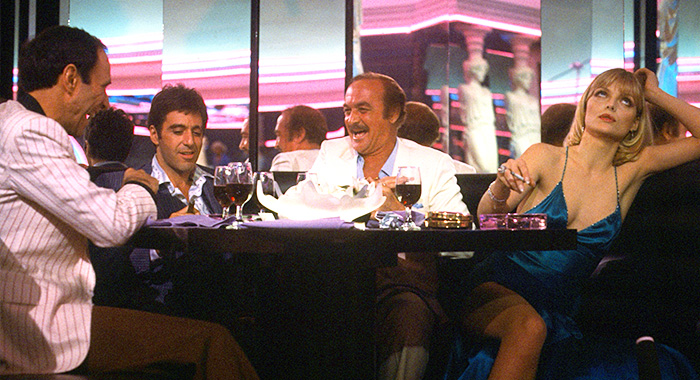 Scarface director Brian De Palma was inspired by Howard Hawks and Richard Rosson’s 1932 gangster picture of the same name, but where the earlier version was a relatively straightforward morality play, De Palma’s ‘80s update offered viewers a far more lurid take on the rags-to-bullets tale of crime kingpin Tony Montana and his wife Elvira (Pfeiffer). Garishly violent and gleefully profane, Scarface endured an extended battle with the MPAA before bowing to decidedly mixed reviews, but it was a fairly sizable commercial hit — and critics have come around over the years, helping cement its status as an eminently quotable classic of over-the-top ‘80s crime cinema. “The dominant mood of the film is anything but funny,” observed Vincent Canby of the New York Times, one of the few major contemporary critics to praise the film during its initial release. “It is bleak and futile: What goes up must always come down. When it comes down in Scarface, the crash is as terrifying as it is vivid and arresting.” 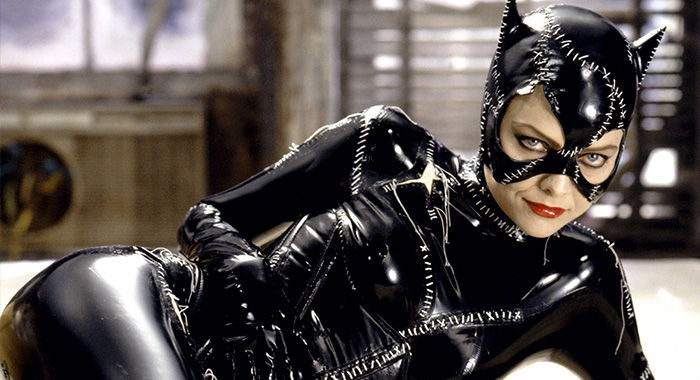 Although he was initially reluctant to film a Batman sequel, director Tim Burton was eventually persuaded to return to Gotham after wresting complete creative control from Warner Bros. The result was 1992’s Batman Returns, a casting dream that found Batman (Michael Keaton, donning the cowl for the final time) facing off against Catwoman (Michelle Pfeiffer, resplendent in leather) and the Penguin (a scenery-chewing Danny DeVito). Though some critics (and parents) felt the film was too dark, most reviews were positive; in fact, before Christopher Nolan came along with Batman Begins, Batman Returns was the best-reviewed film in the franchise, something Desson Thompson of the Washington Post attributed to the fact that it “comes closer than ever to Bob Kane’s dark, original strip, which began in 1939.” 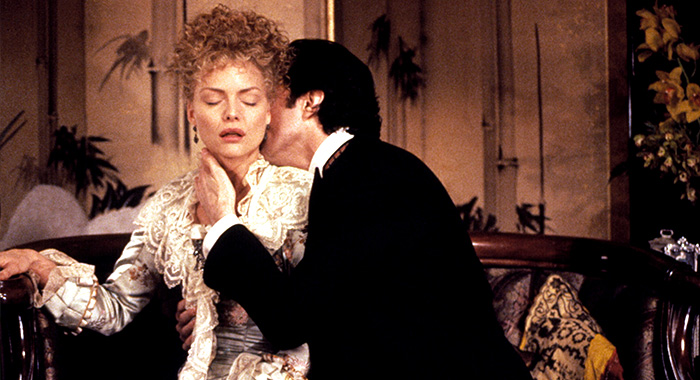 With Martin Scorsese in the director’s chair and a cast led by Pfeiffer, Daniel Day-Lewis, and Winona Ryder, 1993’s The Age of Innocence was practically a critical hit even before it arrived in theaters. Add in a screenplay adapted from the Edith Wharton novel about 19th-century star-crossed lovers, and the pundits’ swooning was predictable — but also understandable, given all the delicious drama wrung from Wharton’s story of a nobleman (Day-Lewis) bound by his engagement to one woman (Ryder) even as he pines through the decades for another (Pfeiffer). “I have seen love scenes in which naked bodies thrash in sweaty passion,” mused Roger Ebert, “but I have rarely seen them more passionate than in this movie, where everyone is wrapped in layers of Victorian repression.” 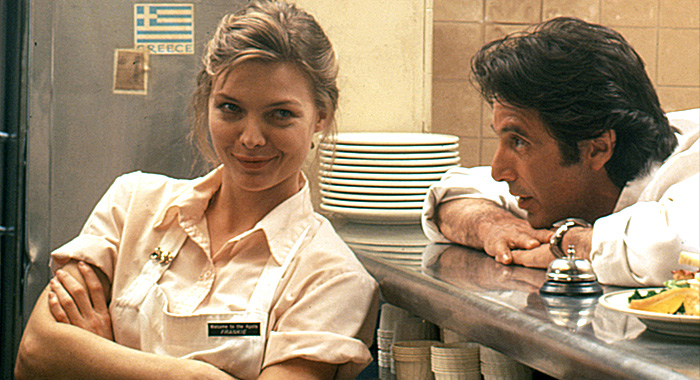 Nearly a decade after playing out a very different type of romance in Scarface, Pfeiffer and Al Pacino reunited for Frankie & Johnny, the story of the unlikely bond that develops between a cynical waitress and the ex-con who gets a job in the kitchen at her diner. Despite its starry cast, it was never meant to be blockbuster material; directed by Garry Marshall and adapted by Terrence McNally from his own play, it was much more of an adult-oriented character study that leaned on a talented creative team and veteran leads to explore the ups and downs of new love in the second chapter of one’s life. “Frankie & Johnny gives Pfeiffer and Pacino room to create warm, expansive characters, and it has one element that feels absolutely fresh,” wrote Entertainment Weekly’s Owen Gleiberman. “It captures the dull romantic ache people can carry around with them for years.” 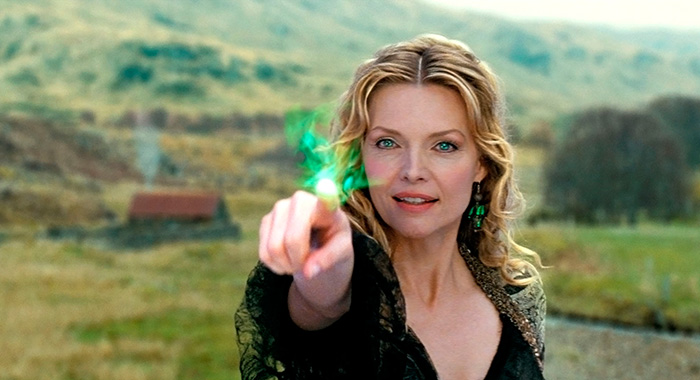 If you’re in the mood for an effects-fueled fantasy, there are plenty of movies to choose from — but if you’re itching to see one that stars Robert De Niro as a cross-dressing space pirate and Michelle Pfeiffer as a witch, well, there’s only one choice, and that choice is Stardust. This Matthew Vaughn-directed adaptation of the Neil Gaiman novel about a mystical quest to recover a king’s jewel was a little ahead of its time, arriving just before the MCU ramped up demand for colorful films derived from illustrated adventures, but it still did fairly well for itself with critics and audiences, earning largely positive reviews and more than $135 million worldwide. “Stardust lights up the screen with a splendid tale of heroism and romance,” enthused USA Today’s Claudia Puig. “You don’t have to be a fan of fantasies to enjoy its considerable whimsy.” 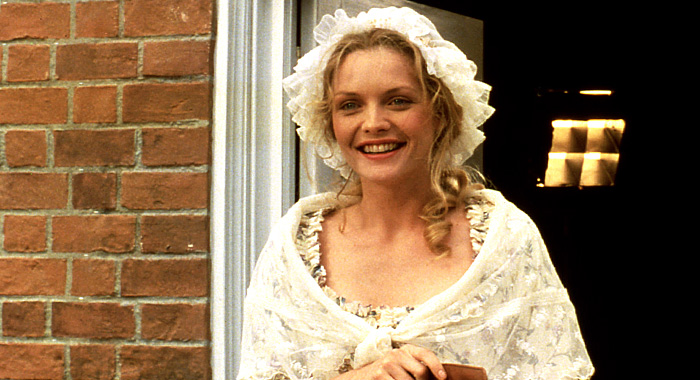 Under normal circumstances, any film in which Alan Alda and Michael Caine vie for the affections of a young Michelle Pfeiffer would fall under fantasy or science fiction. Yet 1986’s Sweet Liberty is really a character-driven dramedy about a college professor (Alda, who also wrote and directed) whose initial excitement after selling his historical novel to a film studio fades once the production actually gets rolling — and he realizes his American Revolution story is about to get the Hollywood treatment, complete with copious violence and gratuitous nudity. Not even the seemingly sweet starlet (Pfeiffer) is what she appears to be. In terms of storyline, it isn’t all that different from the type of small-town movie-biz sendup we’ve seen play out in countless other films, but the ingredients make all the difference; as Blake Davis wrote for KFOR, it’s “A sweet, funny comedy about the perils of being a writer and making a movie. An underrated charmer.”