Pacific Rim: Uprising Is Not That Good

Plus, Paul, Apostle of Christ is a holy mess, Sherlock Gnomes and Midnight Sun weren't screened for critics, and Unsane and Isle of Dogs are Certified Fresh. 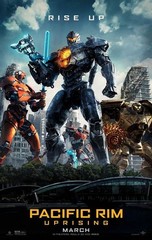 After you’ve racked up hundreds of millions in box office grosses by pitting giant robots against giant monsters, what’s your mandatory next move? A sequel, of course — and that leads us to Pacific Rim Uprising, which finds Steven S. DeKnight taking the reins from Pacific Rim director Guillermo del Toro for another round of large-scale mayhem with the fate of the human race hanging in the balance. While the original Rim wasn’t exactly a critical darling, reviews promised a cheerfully undemanding good time; unsurprisingly, Uprising delivers more of the CGI-fueled set pieces that drew crowds the first time around, with the added benefits of a pair of likeable leads in John Boyega and Cailee Spaeny. Unfortunately, none of that is enough to counter an unfortunate drift toward assembly-line action that lacks its predecessor’s signature del Toro quirk and leaves all that high-stakes, end-of-the-world drama feeling awfully loud and ordinary. On the other hand, it’s got giant robots and giant monsters punching each other into oblivion, so if you’re in the mood for that, everything else might not matter. 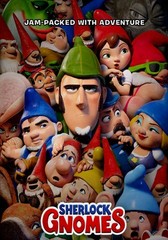 It took half a decade for Pacific Rim fans to get a sequel, but that’s nothing compared to the long wait endured by anyone who walked out of Gnomeo & Juliet hoping for a second installment. After seven long years, Sherlock Gnomes has arrived, reuniting members of the original voice cast (including James McAvoy, Emily Blunt, Michael Caine, and Ozzy Osbourne) for an adventure involving the titular detective (voiced by Johnny Depp), his ex-girlfriend (Mary J. Blige), and his fellow sleuth Gnome Watson (Chiwetel Ejiofor). Was it worth the wait? We wish we could tell you what the critics think, but reviews haven’t started posting yet, so we’ll all just have to wait and see. In the meantime, how about a round of Guess the Tomatgnometer? 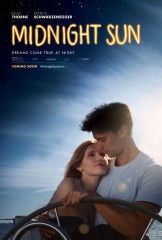 Ah, young love. Chances are you remember your teenage romances as being fairly ordinary, albeit occasionally melodramatic; in the movies, however, two fresh-faced teens can’t so much as smooch without life-threatening stakes rising up to thwart their hormones. Such is the case with Midnight Sun, starring Bella Thorne as Katie, a 17-year-old with a life-threatening allergy to the sun. She compensates by heading outside after dark, but when one fateful night finds her crossing paths with her neighbor crush (Patrick Schwarzenegger), it’s clear our lovebirds — and the audience — are headed for hankie-dampening heartache. By and large, this sort of thing tends not to play very well with critics, which is probably why Midnight Sun didn’t screen early for the scribes. Guess that Tomatometer! 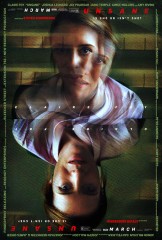 For decades, Steven Soderbergh has been known as a filmmaker with an uncommon knack for using technical gimmickry in service of a solid story. That streak continues with his latest outing, Unsane, a mystery thriller about a young woman (Claire Foy) who’s institutionalized against her will and undergoes major trauma — perhaps real, perhaps imagined — while she’s locked up. It’s a straightforward enough story, but Soderbergh has told it in somewhat unusual fashion; instead of filming with the traditional array of professional gear, he opted to shoot the picture on the sly with an iPhone. Unsane isn’t the first mainstream release to be made this way — Sean Baker‘s Tangerine is another example of smartphone technology being brought to bear on modern filmmaking — but given the resources at Soderbergh’s command, this was clearly a creative choice not purely driven by financial need. For the most part, the reviews agree it’s a move that paid off here: the movie’s intimate aesthetic works well with the story, adding to the overall creepy tone and making it harder to draw the line between fantasy and reality. Like last year’s Logan Lucky, this is a project that’s left critics cheering the end of Soderbergh’s short-lived — and obviously premature — retirement. 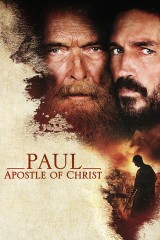 Easter Sunday is right around the corner, which makes this weekend a perfectly fine time for a faith-based drama — and writer-director Andrew Hyatt is here to oblige with Paul, Apostle of Christ, a look at the last days of the titular biblical figure (played by James Faulkner) as he reflects on his life while awaiting execution in the prisons of Roman emperor Nero. While serving his sentence, he’s visited in his cell by Luke (Passion of the Christ vet Jim Caviezel), who vows to record Paul’s story — and we all know how that turned out. Of course, as Rogue One proved, knowing how a story ends doesn’t necessarily make it any less enjoyable as long as it’s well told; unfortunately, critics say that’s where Paul stumbles, focusing on a section of its subject’s life that’s overall ill-suited to explore the movie’s desired themes in a truly meaningful or compelling way. For filmgoers who are in the mood for a Bible story at the cinema, it might still be worth the price of a ticket, but all in all, this looks like an example of the book being better than the movie.