Only the Brave Is a Powerful Tribute

Plus, Geostorm is a flashy disaster, The Snowman earns a chilly critical reception, and Mindhunter is Certified Fresh.

This weekend at the movies, we have a fact-based firefighter drama (Only the Brave, starring Josh Brolin and Miles Teller), a world on the brink of destruction (Geostorm, starring Gerard Butler and Jim Sturgess), Madea’s latest brush with the supernatural (Tyler Perry’s Boo 2! A Madea Halloween, starring Tyler Perry and Cassi Davis), a detective on the trail of a serial killer (The Snowman, starring Michael Fassbender and Rebecca Ferguson), and the tale of an unlikely real-life friendship (Same Kind of Different as Me, starring Greg Kinnear and Renée Zellweger). What are the critics saying? 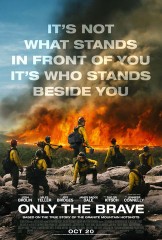 It can feel like it’s almost impossible to find a real hero these days — from the scurrilous behavior we see in the headlines to the darkness that seems to plague most modern incarnations of our most beloved cinematic good guys, life (and pop culture) makes it easy to second-guess who you’ve been rooting for. But in Only the Brave, the lines are pretty clear: on one side, you’ve got a raging wildfire threatening to engulf Arizona; on the other, you have the band of determined first responders who battled the blaze, some of whom paid the ultimate price for their dedication. It’s an old-fashioned tribute to heroism, in other words, and critics say it’s a darned effective one — a down-to-earth change of pace for Oblivion and Tron: Legacy director Joseph Kosinski, it’s led by a solid ensemble cast rounded out by Jeff Bridges, Josh Brolin, and Miles Teller. Both as a stirring drama and a powerful tribute to the real-life firefighters who lost their lives, it’s being lauded as the kind of movie that sends you out of the theater full of emotion. If you’ve ever complained that Hollywood doesn’t make ’em like they used to, Only the Brave looks like a good way to invest your theatergoing dollars this weekend. 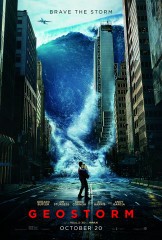 As the writer and producer of effects-fueled movies like Independence Day and the 1998 Godzilla, Dean Devlin has learned a thing or two about blockbuster spectacle during his career — and Gerard Butler, star of 300 and the [Insert City Here] Has Fallen franchise, certainly knows his way around some CGI and a bunch of explosions. This weekend, the duo unite for Geostorm, a futuristic sci-fi action thriller — written, produced, and helmed by first-time director Devlin — in which Butler plays a satellite designer racing against time to save humanity after the machines controlling Earth’s climate go haywire. We can definitely expect a lot of serious looks, millions of dollars’ worth of special effects, and perhaps the destruction of a landmark or two, but unfortunately, the few critics who have weighed in thus far haven’t been particularly impressed by Devlin’s brand of world destruction, which they describe as flashy but ultimately uninspired. While more reviews steadily roll in and the Tomatometer begins to settle, feel free to check out our list of 24 disastrous disaster movies. 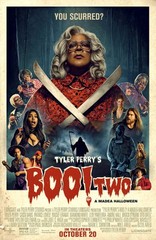 A year after scaring up nearly $75 million with Boo! A Madea Halloween, Tyler Perry has donned his most famous creation’s getup for the inevitable sequel. The tenth film in Perry’s wildly popular Madea series, Tyler Perry’s Boo 2! A Madea Halloween finds the title character in a haunted campground, where she, her cousin Aunt Bam, and their friend Hattie wind up in the middle of all manner of supernatural shenanigans. There will certainly be a lot of screaming involved, although whether any of it will come from the critics, we can only imagine. Boo 2! wasn’t screened in advance, so we’re still waiting on word regarding whether the scribes think Madea’s latest is worth your hard-earned income. In other words, guess the Tomatometer! 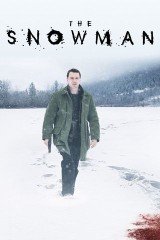 All things considered, “Harry Hole” probably has to be one of the more unfortunate names for a big-screen police detective, but when an actor with Michael Fassbender’s steely charisma is playing a character, names don’t matter as much — and anyway, ol’ Harry has been thrilling readers with his bestselling exploits for 20 years, courtesy of author Jo Nesbø’s apparently boundless imagination for twisted crime stories. Detective Hole makes his Hollywood debut with this weekend’s The Snowman, helmed by director Tomas Alfredson (Let the Right One In, Tinker Tailor Soldier Spy) and adapted from the seventh novel in the series, in which he must find and decommission a serial killer with a distinctively nasty calling card. Needless to say, this movie would seem to have all the right ingredients for a chilly good time, which makes it all the more disappointing that critics have rejected it so resoundingly — reviews describe a movie that misses the mark on any number of levels, from its clichéd and uninvolving plot to its troublingly sexist overtones. Fassbender remains an actor with more than enough cinematic authority to flash a badge and catch a perp, but The Snowman looks like a cold case in all the wrong ways. 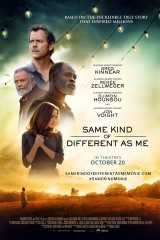 Only the Brave isn’t the only movie based on a real-life story this week. We also have Same Kind of Different as Me, inspired by the book written by Ron Hall and Denver Moore about how fundamentally both of their lives changed after they struck up a friendship sparked by Hall’s wife. Starring Greg Kinnear as Hall, Djimon Hounsou as Moore, and Renée Zellweger as Deborah Hall, Different makes its way to theaters after a long delay in the studio pipeline — this is a picture that was originally scheduled to be released last April, which doesn’t tend to bode well for a movie’s critical fortunes. Alas, we can’t say for sure quite yet, and you know what that means: it’s time to play Guess the Tomatometer for the second time this week.

Mindhunter distinguishes itself in a crowded genre with ambitiously cinematic visuals and a meticulous attention to character development.