While you wait for season 2 of the FX on Hulu drama, check out these shows that put the spotlight on chefs, music, Chicago, and the struggle to make it as an ambitious, young entrepreneur. 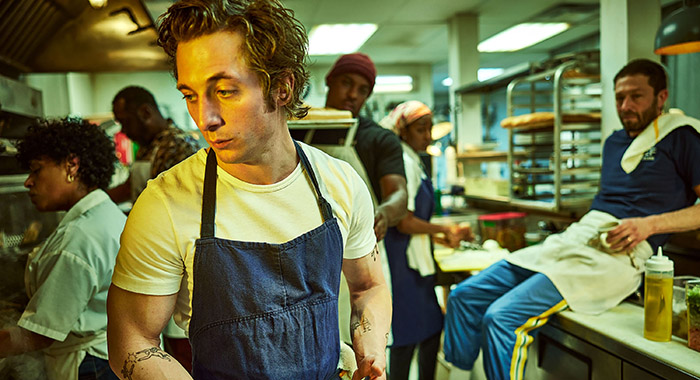 Watching The Bear is an immersive experience. Viewers are taken behind the scenes of an intense restaurant environment, exposed to the emotional trauma of a family losing a loved one to suicide, and given a bird’s-eye view of the plight of a neighborhood going through gentrification.

America’s third coast has played a major character in dozens of shows over the years, from political drama The Good Wife, to ’90s hospital hits E.R. and Chicago Hope, to more recent series like Lena Waite’s The Chi, the quirky animated Netflix series Chicago Party Aunt, and producer Dick Wolf’s Chicago shows (Fire, Med, P.D.). But aside from its location, the indie rock B-sides of the ’90s and ’00s that give the show its grayscale soundtrack, the struggling entrepreneur and brothers-in-arms vibe of Carmy (Jeremy Allen White) and Richie (Ebon Moss-Bachrach), and the Chef’s Table–level intricacy of some of those food shots combine to make The Bear a gritty masterpiece.

Since you’ve binged the show already, here are 10 more series with a relatable vibe to help sate your appetite until Hulu serves up season 2 of the FX series.

Jeremy Allen White played Philip Gallagher on the U.S. version of Shameless for 11 years, so it’s impossible not to mention the hit Showtime show as a great follow up if you’ve never seen it (or just want to revisit White’s growth as an actor). In a recent GQ profile, White says he was starting to doubt himself as an actor after so long playing the same character, and that self-doubt is part of what drew him to play Carmy. Aside from White’s presence on screen, Shameless also takes place in Chicago and focuses on a family dealing with drug and alcohol abuse and addiction. Based on the U.K. version of the same name, William H. Macy makes Frank his own, and while he is truly hard to love, he grows on you over time. As eldest daughter Fiona, Emmy Rossum is the heart and a hero of the series. If you think White just came out of the blue to The Bear, you have a lot of catching up to do and there’s no better place to do it.

Gordon Ramsay lifted the veil on restaurant kitchens across the U.S., doing major rehab on sub-par diners and restaurants. It was one of the first reality programs (it premiered in 2007) to show what really happens behind the scenes and Ramsey gives Richie a run for his money with how many bleeps (it was a Fox network show after all) were needed per episode. The energy behind the stove is palpable in many episodes, as is the sense of family, allegiance, and belief in their cooking like we see in The Bear — for better or for worse — among the management, wait staff, and kitchen staff. There are moments in The Bear — like when Sydney’s risotto wins Tina over — that mirrors instances on Kitchen Nightmares like a mom-and-pop restaurant owner tasting Ramsey’s much-improved version of their burger.

If you loved seeing how Carmy’s and Sydney’s brains work, putting different flavors together and experimenting behind the scenes, if you got a kick out of Marcus’ obsession with the Nobu doughnut and perfecting the fruit fermentation, the PBS series The Mind of a Chef is your next watch. Using unique visuals and expert interviews with heavy hitters like Momofuku’s David Chang, The Mind of a Chef (narrated by the late, great Anthony Bourdain) takes you inside the way menus and dishes are put together in a way no other cooking show really does. If your version of fun is reading cookbooks, this is like a TV version of the cookbook shelf on The Bear.

The movie Chef with Jon Favreau followed a fictional food truck around the country. Its reality spinoff, The Chef Show on Netflix, brings Favreau into the kitchen with his Chef inspiration, L.A. Korean taco king Roy Choi, and a lineup of celebrities from Gwyneth Paltrow to Seth Rogan who learn some real cooking skills alongside them. It has the narrative and star quality of the movie with the reality-show feel of close-up food shots, followable recipes, and kitchen mishaps. Following the heaviness of The Bear, a lighthearted look at cooking from a Michelin-starred chef may serve as a welcome palate cleanser.

Real-life television chef Julia Child may seem light years away from The Bear’s Carmy, but theirs are both tales of struggle, trauma, and a deep love of and respect for the art of cooking. Happy Valley star Sarah Lancashire fully embodies the food icon in a series that was woefully overlooked in the 2022 Emmy nominations — quelle injustice! In this dramatized portrayal of her life, the chef’s troubles stem from institutional sexism in the television industry, one which values — even on public television and even in the 1960s, when The French Chef first premiered — the beauty of a woman expert in her field more than her skill. Lancashire’s Child wills her legendary cooking show into existence, politely elbowing aside naysayers, plying executives with cake, and a wielding conviction so strong that she even picked up the food tab in the show’s early run. If Carmy’s passion for his craft appeals to you, Julia’s may too.

A story about a young man returning home and trying to make a go of it, in a city that isn’t L.A. or New York, and a storytelling structure that allows each episode stand alone, but isn’t quite an anthology — sound familiar? In Donald Glover’s groundbreaking series Atlanta, the actor and filmmaker takes a short-story approach to the life of rapper manager Earn and his friends and family. Music is at the heart of the show, highlighting classic and up-and-coming artists. The Bear employs a similar structure with each day in the kitchen its own snapshot of life at The Original Beef of Chicagoland. More good news? You don’t have to wait long for new episodes of Atlanta; the series returns on FX September 15 for its fourth and final season.

Imagine How I Met Your Mother, Friends, and The Bear had a quirky kid and it would be Happy Endings, an underappreciated sitcom from Black Monday showrunner David Caspe that ran from 2011-2013. Unapologetically Chicago and with a sandwich food-truck business to boot, Happy Endings follows the lives of six friends in their late 20s/early 30s living in the Windy City. It has parts that haven’t aged well, but the fun in watching a group of collective weirdos hanging at their local and trying to make a go of it makes for a fun weekend binge and a reminder that TV is not always reflective of real life and owning a restaurant is probably more like running The Original Beef of Chicagoland than — wait for it — Steak Me Home Tonight.

While the Hulu series adaptation of the popular 2000 John Cusack film moved the setting from Chicago to Brooklyn, it retained its heart and swapped Zoë Kravitz in brilliantly for Rob, the egocentric music-obsessed record store owner dealing with intense heartbreak. A High Fidelity binge should immediately inspire viewers to download the soundtrack, and same goes for The Bear; from Counting Crows to Wilco to Sufjan Stevens, the Breeders to Andrew Bird, The Bear showrunner Chris Storer and music supervisor Josh Senior clearly put their indie rock sensibilities into every pivotal scene, recreating a gray and gritty Chicago in music form. High Fidelity is a little more overt but no less pretentious in its choices, from the instantly recognizable like Fleetwood Mac’s “Dreams” to the cocktail-party-trivia obscure. Watch, jam, and impress your friends with deep cuts like Frank Zappa’s “Bobby Brown Goes Down.”

Some of the best shows are coming out of France right now, from Call My Agent and the Hookup Plan to this little gem, Family Business. It’s a farce about a failed tech startup founder who turns to his aging father’s kosher butcher shop in Paris as a front for his next big idea – a marijuana dispensary and coffeeshop. Convinced weed will soon be made legal in France, Joseph (Jonathan Cohen) starts experimenting, eventually dragging his horticulturist grandmother (Call My Agent’s Liliane Rovere), savvy sister, and good friend into the mix. Joseph has the entrepreneurial spirit and seat-of-your-pants initiative that Carmy has, the deep family roots, and Richie’s penchant for hanging out with drug dealers all rolled into one. Brush up your French or your subtitle-reading skills and check it out.

94% It's Always Sunny in Philadelphia (FX/Hulu)

The longest-running live-action sitcom is up to its 15th season, still mining Paddy’s Pub for antics, laughs, and absurd scenarios. It’s more of a comedy than The Bear, but it is set in a pub with young, struggling lead characters, and is very city-specific, with many similarities between Philly and Chicago, a family with deep roots, and a bar that has seen better days. We can imagine Carmy and Richie stopping into Paddy’s for a pint after a long day…