A few "holy sh--" moments punctuated "The Long Night," but what did critics make of the episode overall?

Given the immense anticipation leading up to episode 3 of HBO fantasy juggernaut Game of Thrones 89%, the assumption was that the battle against the Night King’s army at Winterfell in “The Long Night” would be unequivocally epic. But you know what they say about assumptions.

Critics and fans hung on for two relatively mellow first weeks of the final season. It was fine that the premiere, “Winterfell,” was mostly filled with character reunions and episode 2, “A Knight of the Seven Kingdoms,” favored sentimentality over conflict, because everything was building to the #BattleofWinterfell (though that hashtag had been seen before).

Alas, not everyone was blown away by the latest battle at the Stark ancestral home, as demonstrated by the episode’s unusually low (for the series, that is) Tomatometer score: 75% with 92 reviews so far (at 1:20 p.m. PT on April 30). 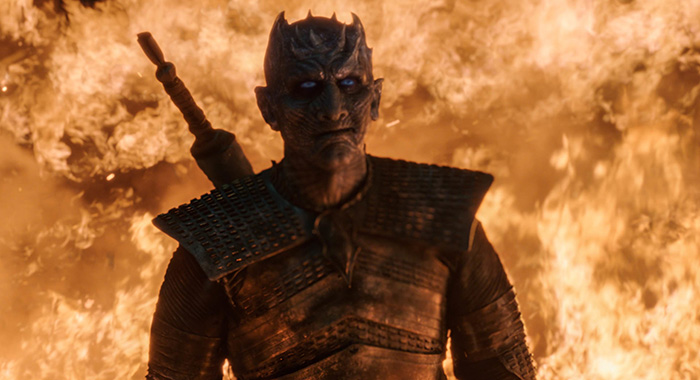 Some critics were pleasantly surprised by the episode’s unexpected twists, others were utterly disappointed and lamented the return to the pursuit of the Iron Throne. Many critics found the battle “brutal and emotionally exhausting” — but in a good way! But more than a mere few — 23% if you do the math — as well as some vocal fans on Twitter, found it less-than-thrilling at best, and a “betrayal” at worst.

“The Long Night” is the lowest-scoring of the season’s three episodes so far, and if it stays that low, it would be the second lowest-scoring Game of Thrones episode ever (it recently dropped below season 3’s “The Bear and the Maiden Fair“). To put that score into context, however, that’s still higher than popular recent box office superhero fare like Aquaman (2018) 65%.

Read on to find out what critics had to say about Season 8 Episode 3: "The Long Night" 74%.

Did “The Long Night” live up to your expectations? Tell us in the poll below.

How Did Everyone Fare in Battle? 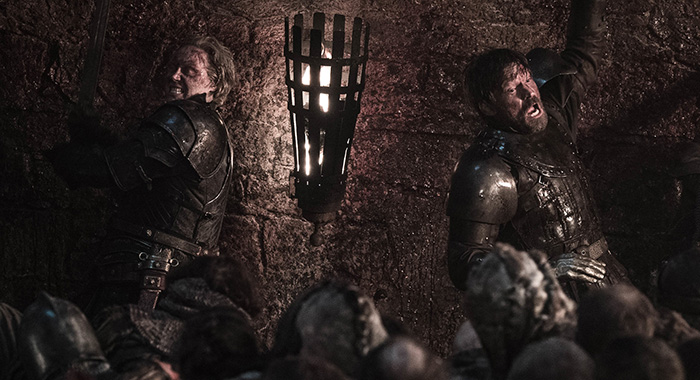 Fighting an army of the dead is never easy, but Daenerys and Jon’s output was so pitiful here that I worry their alliance might not make it to the final conflict with Cersei. — David Sims, The Atlantic

After bridging the trenches, the wights started climbing the walls. So it was up to Gendry, Jaime, and the gang to fight them all off one by one — a project that was manifestly futile from the start. Still, it gave Brienne a chance to save Jaime’s life, so that was nice. — Michael Hogan, Vanity Fair

What was most striking to me was that while the men were busy having existential crises in the middle of a bloody battle (I’m looking at you Clegane), women were getting shit done. — Anne Cohen, Refinery29

Cersei is a winner because she knows, every time, that she can just hang back and let other people do her dirty work, then sip her wine and chuckle to herself about how everybody else did the dirty work for her. — Todd VanDerWerff, Vox

Read more: The 11 Biggest Moments from “The Long Night.”

Did the Action Live Up to Expectations? 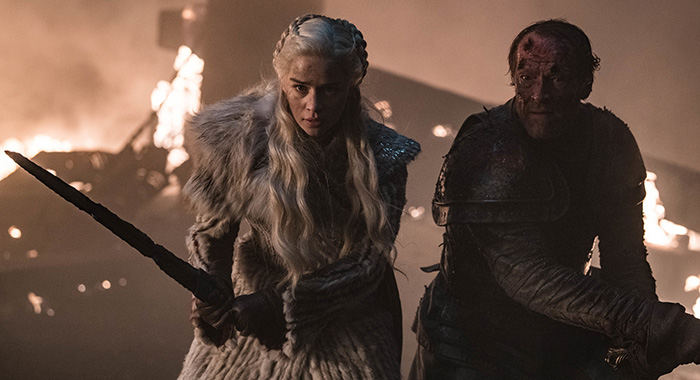 The episode stands in as the ultimate representative of one of the ways “Game of Thrones” has seen itself, as the staging-ground for ultra-violent action whose stakes are the fate of the world. — Daniel D’Addario, Variety

Perhaps the hour’s been built up too much, or maybe events were too foreshadowed; we knew that mankind would prevail, if only because it’s got to fight amongst itself a bit more before Thrones’ six-episode season is through. — Clint Worthington, The Spool

It’s hardly a roller coaster ride, but that’s actually why this might be one of the better battle-focused episodes of “Game of Thrones” to date; it makes every moment of dread feel truly lived-in, lets each character beat scattered between the battles sink in. — Liz Shannon Miller, indieWire

“The Long Night” was unique in that it’s the one Game of Thrones episode I will never watch again, under any circumstance. I do not need to relive that. If television could give you PTSD, this would have done the job. — Shane Ryan, Paste Magazine

I’m satisfied, but my eyes need a rest. — Spencer Kornhaber, The Atlantic

What’s Everyone Complaining About? 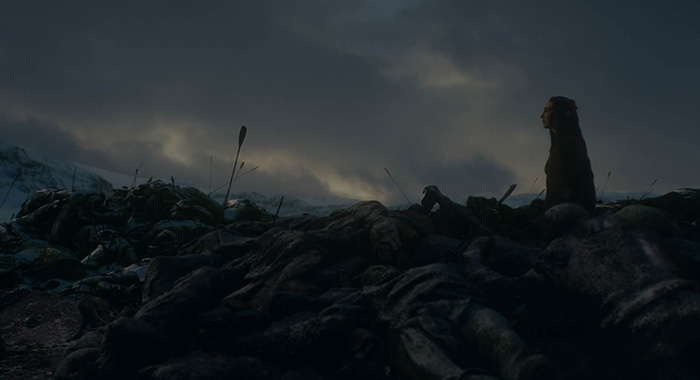 I know the night is dark and full of terrors, but does that mean the episode has to be so literally dark? — Clint Worthington, The Spool

The long-gestating Battle for Winterfell is difficult to follow, occasionally even impossible to discern, and ends the most existential threat the series has built up over the course of its run with a “one good hit kills them all” solution that feels more than a little cheap. — Andrew Bloom, Consequence of Sound

The scenes were often so dark that it was impossible to see the action unless it happened to include fire (thanks a bunch, Drogon and Melisandre). The editing was sloppy at times, and it was hard to tell who was where and how they got there. And despite the high death count, most of our major characters still made it out alive, an illogical outcome considering the enemy. — Kelly Lawler, USA Today 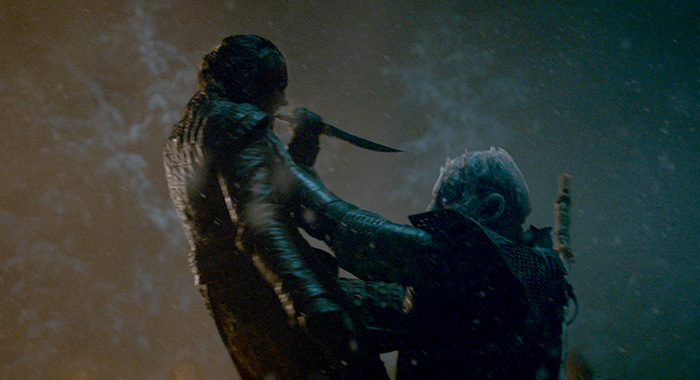 What spectacle! The deus ex machina of Arya’s attack satisfied in both its culmination of a seasons-long build (her development into a master killer) and its tension-exploding suddenness. — Daniel D’Addario, Variety

At nearly the last possible moment of the longest Game of Thrones episode ever, she saved Bran and all humanity from the Night King in one of those moves that would certainly land her a slot in The Avengers if they were making any more Avengers movies. — Ellen Gray, Philadelphia Daily News

Read more: All Game of Thrones Episodes, Ranked by Tomatometer“ 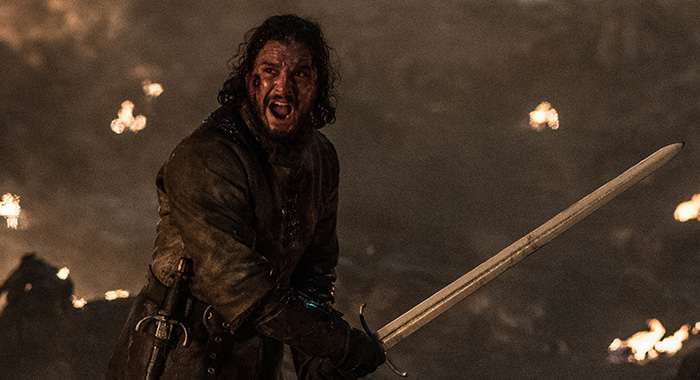 Everything in “Game of Thrones” these past seven seasons led us to these cataclysmic 80 minutes, the sum total of all our fears and theories. A shrug wouldn’t do at all, but only a physical, convulsive reflex — our own yawp into the night, as if to say that TV at its wild, most ambitious best really can make dreams come true. Or nightmares. This one certainly did. — Verne Gay, Newsday

With three episodes remaining in its eighth and final season, “Game of Thrones” has defeated its most powerful and threatening villain, the Night King… It was as grand and almost as fatal as we all predicted, sure, but it also ended the White Walker threat forever with one tidy blow. — Kelly Lawler, USA Today

If you asked me whether “Game of Thrones” is a genuinely great show, after “The Long Night,” I’d have to answer: not today. — Alyssa Rosenberg, Washington Post