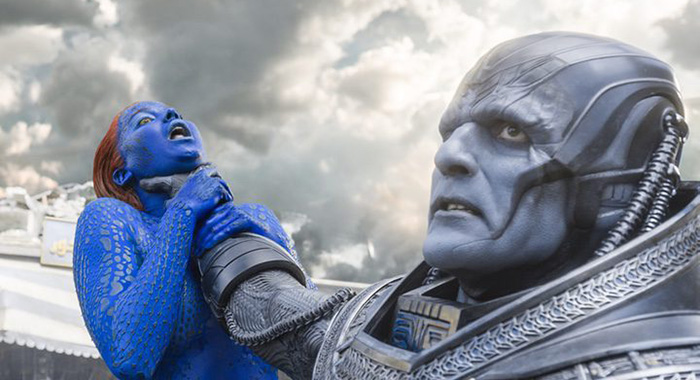 Hollywood studios programmed two big-budget sequels over the Memorial Day holiday frame and audiences responded with smaller spending than for the films’ predecessors.

Opening at number one was the super hero epic X-Men: Apocalypse with an estimated $80M over the long Friday-to-Monday holiday session averaging $19,277 over four days from 4,150 locations. While easily enough to win the weekend, it was 28% below the opening performance of the last film in the X-Men series – Days of Future Past which bowed to $110.6M over the same four-day holiday weekend two years ago. That film featured both old and new casts together and brought back original director Bryan Singer after a decade-long absence. Apocalypse was more of a stand-alone adventure that was typical for the genre.

The Friday-to-Sunday portion was $65.3M. Looking at the nine-film mutant franchise that Fox has had over the past 16 years, Apocalypse had the sixth best opening weekend. In terms of actual tickets sold, it ranks seventh out of nine. The new PG-13 film sold approximately 25% fewer tickets on opening weekend than the first X-Men in July of 2000.

Reviews for the new mutant saga were not too strong and were a far cry from the raves received by DOFP. Also, movie fans have already spent over $1 billion on a trio of comic book movies this year so some may not have felt the need for a fourth one in under five months. Studio data showed that the audience was 62% male and 55% over 25. Despite five major roles for women in the cast, the female share of the crowd was relatively low. The CinemaScore grade was a good A-.

Given how front-loaded a super hero sequel launching over a holiday weekend can be, the final domestic haul may reach the neighborhood of $170M. That would be less than what Deadpool made in its first six days and less than what Captain America: Civil War grossed in its first three.

Overseas markets, as usual, are being counted on to deliver healthy returns. X-Men: Apocalypse launched a week ago in many markets and debuted in a new key one this time. A total of 79 territories delivered $55.3M this weekend led by Korea’s $12.1M opening. The U.K. is the top grosser with $17.5M to date after its sophomore frame. The overseas cume is now $185.8M and global stands at $266M with China opening next weekend and Japan coming in August. Apocalypse reportedly cost $178M to produce and a final global take of $550-600M is possible. Next up, another Wolverine film is on the calendar for March 3 next year.

Johnny Depp’s career met with another setback this weekend with the disastrous performance of his latest big-paycheck project Alice Through the Looking Glass which bowed to only $34.2M over four days, according to estimates. The three-day portion of $27M represents a staggering 77% plunge from the $116.1M opening weekend of 2010’s Alice in Wonderland which was a monster 3D hit grossing over $1 billion globally prompting those involved to get another installment made. Audiences were not part of that discussion as consumer interest was never very high for this new chapter despite a pricey marketing push over the last several weeks.

If there is any studio that can shake off a bomb right now it’s Disney which has already grossed over $1 billion domestic from a trio of hits that are all still in the top ten right now. Looking Glass is on track for a final domestic total of near $80M. That would be even below the studio’s past big-budget summer bombs The Lone Ranger starring Depp, Prince of Persia, and George Clooney’s Tomorrowland which bowed this same weekend last year to $42.7M over four days. Finals were $89.3M, $90.8M and $93.4M, respectively.

With a reported budget of over $170M, the new Alice had a demo breakdown of 57% female and 56% over 25. 41% of the gross came from 3D screens. 43 international territories delivered a $65M opening weekend overseas for a global launch of $93.1M through Sunday. China led the field with a strong $27.1M but all others posted openings of $5M or less. France, Japan, and Korea are the key markets that have not yet opened.

Reviews were mostly negative for this new Alice. The novelty of a fairy tale coming to the big screen, plus 3D technology, helped Alice in Wonderland score the sixth biggest opening weekend of all-time back in March of 2010 – and highest ever for a non-sequel. Tim Burton directed and Depp acted and that combo was a huge draw.

But since then numerous fairy tales have been turned into live-action films and the recent sequel The Huntsman: Winter’s War has been a major underperformer generating no interest. Depp has also had many flops in recent years and is not the exciting star he once was. Add in news breaking on the film’s opening day of his alleged domestic abuse and there was little reason for large crowds to come out. On the bright side, those who did come out were fairly pleased with the film. It earned an A- CinemaScore grade.

Following red hot box office attendance this year from January through April, May is now closing up as a month when most films performed below industry expectations. Studios are crossing their fingers hoping that June titles excite moviegoers just as kids start getting out of school for summer vacations. That will be vital to having ticket buyers see trailers and posters for this year’s upcoming movies.

The game-inspired toon The Angry Birds Movie suffered a steep decline in the second weekend falling to an estimated $24.5M giving Sony $72.2M to date. The three-day portion saw a hefty 51% drop. The last major animated film to open this same way was Shrek Forever After in 2010 which dropped 39% on its sophomore frame which was Memorial Day weekend.

Captain America: Civil War eroded to an estimated $19.7M over the long weekend pushing the domestic haul to $377.2M allowing the jumbo pack of super heroes to surpass Deadpool to become the highest-grossing film in North America in 2016. Civil War is now running 8% behind the pace of Avengers: Age of Ultron and only 1% ahead of Iron Man 3 which ended its run at $409M. International for the new Cap rose to $730.7M for a new global take of $1.1 billion.

The comedy sequel Neighbors 2 fell sharply in its second round to an estimated $11.2M putting Universal at $40.4M. Disney’s smash hit The Jungle Book fell to an estimated $9.2M for a new total of $340.7M. It stands at $880M worldwide now.

Disappointing star-driven films aimed at mature adults followed. The Nice Guys dropped to an estimated $8.1M for a new cume of $23.5M for Warner Bros. Sony’s Money Monster grossed an estimated $5.4M for a cume to date of $35M.

The critically acclaimed Jane Austen costume drama Love & Friendship rose to ninth place with an estimated $3.1M expanding to 493 theaters for a good $6,288 average across four days. Cume is $4.1M for Roadside Attractions. Still in the top ten for a 13th weekend in a row was the Disney toon hit Zootopia with an estimated $1.1M. The bunny cop film has banked $336.2M in North America and will be crossing the billion dollar mark soon as it sits at $992M worldwide with Japan performing well each week.

The top ten films grossed an estimated $196.6M over four days which was up 8% from last year’s Memorial Day weekend when Tomorrowland opened at number one with $42.7M; but down 9% from 2014 when X-Men: Days of Future Past debuted in the top spot with $110.6M.

Compared to four-day projections, both X-Men: Apocalypse and Alice Through the Looking Glass came in below Gitesh’s respective forecasts of $93M and $52M.