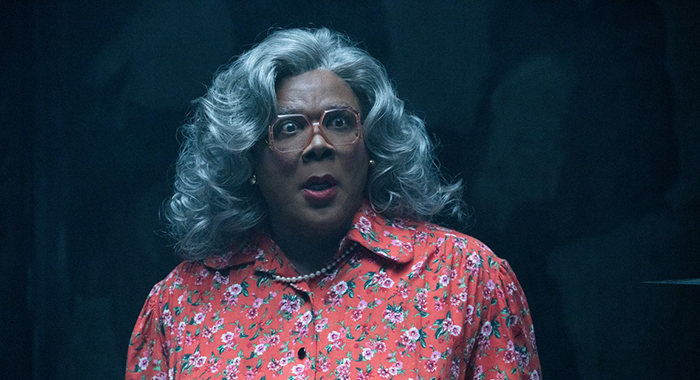 Director Tyler Perry scored his sixth number one opening with the holiday comedy sequel Boo 2! A Madea Halloween which pulled in an estimated $21.7M easily leading all films in North America. Averaging a sturdy $9,066 from 2,388 locations, the debut was down a reasonable 24% from the $28.5M top spot bow one year ago this weekend for its predecessor Boo! which ended up becoming the filmmaker’s second highest career grosser.

Directing 17 films over the past dozen years, Perry has remained a mogul for some time now with most of his films launching in the top three on opening weekend. With two more Lionsgate movies on the calendar for 2018, his cumulative domestic box office looks to break the $1 billion mark by this time next year.

Warner Bros. released the big-budget bomb Geostorm which opened to an estimated $13.3M this weekend from 3,246 locations for a lukewarm $4,097 average. The PG-13 weather disaster film was led by Gerard Butler and was met with terrible reviews from critics. Only those interested in mindless devastation showed up.

Demos put Geostorm‘s crowd at 56% male and 77% over 25 with a lackluster B- grade from CinemaScore. The effects-filled pic grossed $36.4M overseas this weekend and has banked $62.9M globally since its launch in some territories a week ago. China opens next weekend followed by France and Italy.

Falling a steep 64% from its Friday the 13th launch, the horror hit Happy Death Day ranked third with an estimated $9.4M giving Universal $40.7M overall. The domestic gross will finish at more than ten times its $5M production cost. On the other end of the budget spectrum, the sci-fi epic sequel Blade Runner 2049 grossed an estimated $7.2M, down 54%, for a new total of $74M for Warner Bros. An end run at about $90M seems likely.

The well-reviewed firefighter drama Only The Brave delivered a soft opening weekend in fifth with an estimated $6M from 2,577 sites for a $2,332 average. Josh Brolin, Miles Teller, and Jeff Bridges head up the cast of the PG-13 film from Sony which earned a promising A grade from CinemaScore.

Jackie Chan’s actioner The Foreigner followed with an estimated $5.5M for STX, down 58%, and a new cume of $22.8M. The horror sensation It dropped 42% to an estimated $3.5M boosting the incredible cume to $320.2M. With good October legs and Halloween right around the corner, the Pennywise smash has a shot at beating the $330.4M of the super hero tentpole Batman v Superman.

Audiences rejected the crime thriller The Snowman which opened in eighth place with an estimated $3.4M from 1,812 locations for a wimpy $1,876 average. Reviews were bad and paying audiences felt the same giving the Universal release a terrible D grade from CinemaScore polling. Michael Fassbender headlined the R-rated film. The studio’s Tom Cruise clunker American Made made an estimated $3.2M, down 42%, for $45.5M to date.

Rounding out the top ten was the action sequel Kingsman The Golden Circle with an estimated $3M slipping 44%. Fox has collected $94.6M from North America and witnessed a strong $40.3M opening from China this weekend which boosted the international haul to $250.3M and the global tally to $344.9M.

Continuing its successful expansion in specialty release was the acclaimed awards contender The Florida Project which went from 33 to 112 locations in top markets grossing an estimated $637,000 for a solid $5,688 average. Winning over arthouse audiences at film festivals, including the opening night slot of the New Orleans Film Festival, the A24 release is taking its time moving into more markets when the buzz is ready. Total is $1.4M with many more theaters and cities to come. Reviews have been terrific across the board and Florida has also earned three nominations from the Gotham Awards including Best Feature, Actor, and Breakthrough Actor.