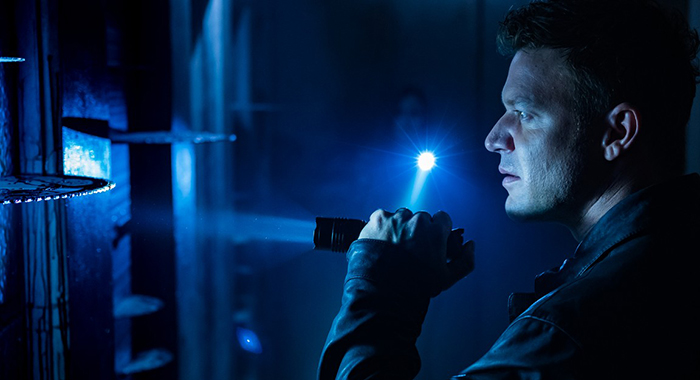 The frame before Halloween saw the franchise horror pic Jigsaw debut at number one, but that still did not stop the North American box office from slumping to its third worst level of 2017. Holiday activities and the World Series proved to be distractions – as they are every year around this time – but Hollywood also contributed to the problem by releasing films which failed to generate much moviegoer excitement. This was the calm before the Thor storm.

Lionsgate launched a sequel in first place for the second straight weekend as Jigsaw debuted to an estimated $16.3M from 2,941 sites for a respectable $5,525 average. While good enough for the top spot, the figure was the second lowest for the eight-film franchise which has seen half of its installments debut in the $30M+ range.

Only Saw VI opened worse with $14.1M in 2009 when Paranormal Activity took over as the hot horror story for the Halloween season. The fright crowd that showed up for Jigsaw was fairly broad as studio data indicated that it was 51% female and 52% under 25. Reviews were not too positive, as expected. The previous seven films in the Saw series grossed a combined $416M domestic and were produced for under $70M total. Overseas markets and home video added plenty more to the pot for the profitable torture franchise.

Tyler Perry slipped to second place with his comedy sequel Boo 2! A Madea Halloween which took in an estimated $10M, off 53% in its sophomore round. A year ago, his first Boo film slipped only 40% in its second weekend while having the same calendar. Cume to date for Lionsgate is $35.5M. A final of about $50M seems likely.

The rest of the films at the box office collected scraps as all remaining movies in the top ten generated averages of below $2,000. The disaster pic Geostorm tumbled 59% in its second weekend to an estimated $5.7M for a weak total of just $23.6M. Thanks to a $34.1M opening weekend in China – which is already the action film’s top-grossing market in the world – the global tally has risen to $137M with remaining territories France and Italy debuting this Wednesday.

Opening to soft results in sixth place was the soldier story Thank You For Your Service which collected an estimated $3.7M from 2,054 locations for a weak $1,802 average. The Universal release earned positive reviews but failed to generate much consumer excitement. Studio data showed that the audience was 72% white, 59% over 30, and 58% male. Those who did show up liked what they saw as the CinemaScore was an A-.

Another drama about American heroes followed as Only The Brave declined by 43% to an estimated $3.5M putting the Sony title at $11.9M. STX was next with the actioner The Foreigner with an estimated $3.2M, down 45%, and a new sum of $28.8M.

After being rejected by film critics, George Clooney’s latest directorial project Suburbicon was rejected by audiences too opening down in ninth place with an estimated $2.8M from 2,046 theaters for a poor $1,369 average. Adding to the bad reviews was a dismal D- grade from CinemaScore. Matt Damon led the cast for the R-rated comedy.

With Halloween approaching, the biggest horror movie of them all It watched its global gross rise to $666.6M. The Stephen King tale slipped only 29% to an estimated $2.5M spending its eighth consecutive weekend in the top ten. North American audiences have spent $323.7M while overseas fans have added $342.9M to the bank. The final market of Japan opens next weekend and should help propel It past $700M by the end of the run.

Debuting to good results just outside of the top ten was the faith-based drama Let There Be Light from director/star Kevin Sorbo and executive producer Sean Hannity. The Atlas release grossed an estimated $1.8M from 373 locations for a good $4,826 average and will expand in its second frame.

The super hero tentpole sequel Thor: Ragnarok opened overseas in 36 markets this weekend and grossed a stellar $107.6M which was 4% bigger than the launch of Marvel’s last sequel Guardians of the Galaxy Vol. 2 at the start of summer. Next weekend marks the debut in the rest of the world including North America, China, Russia, and Japan which should allow the worldwide cume to soar past $400M with plenty more to go.