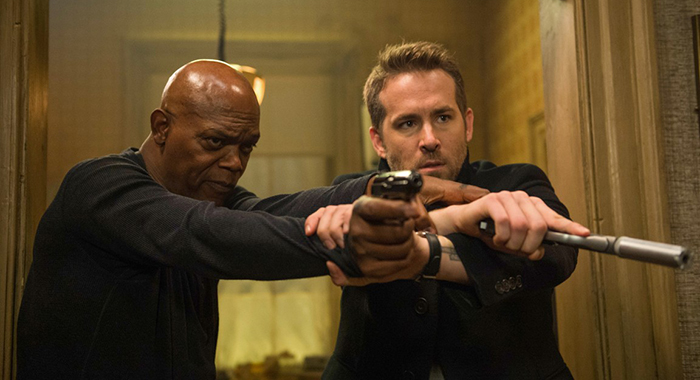 Failing to give the people what they want, Hollywood studios watched in horror as the North American box office tumbled down to its worst performance in 16 years. The top ten films grossed a dismal $45M which was the lowest total since September 2001 just after the 9/11 attacks. The deadly hurricane in Texas and the big boxing match on Saturday night had some impact, but the lousy menu of films was at the root of the problem.

Only one film broke the $10M barrier this weekend – just barely – and only three movies crossed $5M – just barely. Every single title in the top ten generated an average that was less than its screen count with none reaching $3,000. This widespread weakness at the box office is expected to last for another week as once again studios have given up on next weekend too.

With nothing new exciting moviegoers, the action film The Hitman’s Bodyguard held onto the number one spot for a second weekend taking in an estimated $10M. The Lionsgate release dropped 53% which was about normal for a star-driven action title so no major legs here. Averaging $2,976 from 3,377 locations, the Samuel L. Jackson-Ryan Reynolds pic has collected $39.6M to date and aims to get to the $65M neighborhood.

Falling 53% in its third weekend was the fright flick Annabelle: Creation with an estimated $7.4M boosting the domestic cume to $77.9M. The horror pic is on track to beat the $84.3M of 2014’s Annabelle making it one of very few franchise films this summer to beat its predecessor. Worldwide, Creation now sits at an impressive $215.1M.

The animated film Leap! debuted in third place but collected only $5M, according to estimates. The Weinstein Co. release averaged a weak $1,948 from 2,575 locations and has aimed to give parents one last moviegoing option before kids go back to school. But families have spent enough cash this summer on kidpics and this one did not seem worth the cost to them.

The acclaimed thriller Wind River expanded again and tripled its theater count which led to a jump up to number four with an estimated $4.4M. The average was just $2,105, but in this enemic marketplace, that’s second best among all wide releases this weekend. The Weinstein Co. has banked $9.8M to date for what they hope is the grown-up alternative during the end of summer period.

Logan Lucky dropped a reasonable 43% in its second weekend and grossed an estimated $4.4M as well. The Bleecker Street title has taken in just $15M so far. Another director-driven film followed – Dunkirk with an estimated $4M in its sixth round. The Warner Bros. hit was off 40% and raised its domestic haul to $172.5M with the worldwide total rising to $412.2M.

Audiences had little interest in the new Bruce Lee story Birth of the Dragon which opened down in seventh place with an estimated $2.5M. The BH Tilt release averaged a dismal $1,545 from 1,618 theaters and was met by negative reviews.

In international box office news, Wonder Woman opened in its final market of Japan and broke the $400M overseas mark putting the new global gross at $806M on its way to a finish of around $815M. Despicable Me 3 launched well in Italy and bumped its worldwide haul to $971.7M – the best for any summer movie this year. It will crack the billion dollar mark in another week or so. Both films are still in the Top 15 this weekend at the domestic box office.

The top ten films grossed an estimated $45M which was down a troubling 51% from last year when Don’t Breathe opened at number one with $26.1M; and down 29% from 2015 when Straight Outta Compton stayed in the top spot for a third time with $13.1M.