The top ten films sold just $47.6M worth of tickets -- the worst Labor Day Friday-to-Sunday since 2000 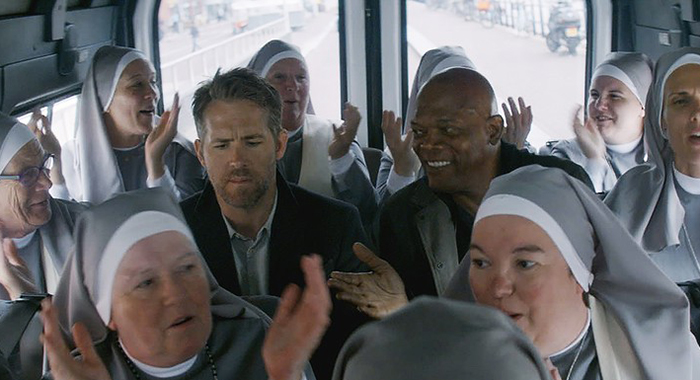 On the final frame of summer, and the last for this current box office dry spell, the North American marketplace witnessed the top ten films Friday-to-Sunday selling just $47.6M worth of tickets, the worst for the Labor Day session since the $44.7M of 2000. And ticket prices have risen substantially since then. Studios opted not to open any major new release leaving audiences with two options – see older films they’ve been hearing about, or skip the multiplex altogether.

For the third weekend in a row, the action title The Hitman’s Bodyguard remained at number one and this time grossed an estimated $10.3M over the Friday-to-Sunday portion of the holiday frame which was almost identical to last weekend’s take. The total for Lionsgate has risen to a solid $54.9M.

Annabelle: Creation took the runner-up spot for the third consecutive time collecting an estimated $7.3M in its fourth weekend, off only 5%, pushing Warner Bros. up to $89M passing the $84.3M of its 2014 predecessor. The new fright flick will try to become the only film from August 2017 to break $100M, but that will be no easy feat with Stephen King’s It expected to open huge on Friday stealing away the target audience. Global is now $253.4M. The four low-cost movies from the Conjuring franchise have now collectively grossed a jaw-dropping $1.15 billion worldwide. That’s an average gross of $287M with an average budget of $21M per film.

It was just pocket change for the rest of the movies in the top ten. The thriller Wind River took in an estimated $5.9M, up 27%, giving The Weinstein Co. $18.3M to date. The distributor’s animated film Leap! followed with an estimated $4.9M inching up 3% with a new cume of a weak $11.4M.

The star-driven pic Logan Lucky climbed 4% to an estimated $4.4M for Bleecker Street which has banked $21.5M. Bumped out of the top five in its seventh weekend was the Warner Bros. war thriller Dunkirk with an estimated $4.1M, up 5%, with $178.8M thus far. China opened big this weekend with $30M, 17% from IMAX screens, raising the international haul to $280M and global to $458.8M with Japan to open next weekend.

Sony took the next two spots. Spider-Man: Homecoming shot up 29% to an estimated $3.7M giving the super hero flick $323M overall. The webslinger pic still has a shot at bumping from the all-time domestic Top 50 list Batman v Superman which did $330.4M. Animated comedy The Emoji Movie grossed an estimated $2.5M, off 2%, for a $79.3M sum.

Universal rounded out the top ten with a pair of very different hit movies. Like most films with kid appeal, Despicable Me 3 rose this weekend shooting up 37% to an estimated $2.4M. Its new totals now stand at $257.9M in North America and a staggering $994M worldwide. The studio’s comedy Girls Trip was off 3% to an estimated $2.3M boosting the cume to $111.6M. It has now beaten recent R-rated female-led summer comedies Trainwreck and Spy and is days away from passing Bad Moms as well.

With Summer 2017 coming to a close, the top-grossing films domestically are all comic book movies – Wonder Woman at $408.9M, Guardians of the Galaxy Vol. 2 at $389.7M, and Spider-Man: Homecoming at $323M. Globally however, the top three Hollywood giants are Despicable Me 3 at $994M, Guardians with $862M, and Wonder Woman at $812.6M. Spidey opens in China next weekend so it hopes to climb past $800M as well by the end of its worldwide run.

The top ten films grossed an estimated $47.6M from Friday-to-Sunday which was down 29% from last year’s Labor Day frame when Don’t Breathe remained at number one with $15.8M; and down 21% from 2015’s holiday when War Room climbed into the top spot with $9.5M.