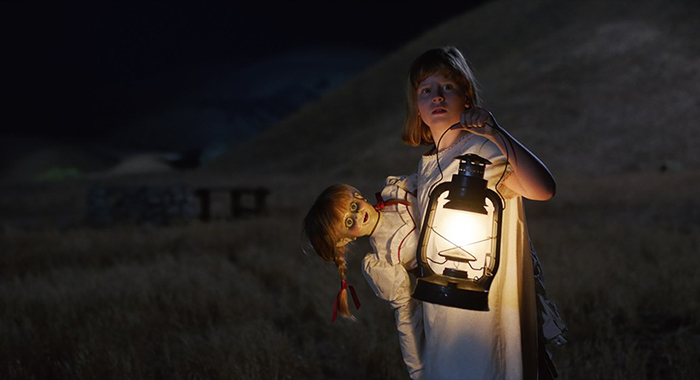 Warner Bros. successfully continued their Conjuring franchise as Annabelle: Creation easily took the top spot this weekend while a couple of other new films opened between mediocre and horrendous.

Creepy dolls during the doldrums of summer seem to sell as Annabelle: Creation powered itself to the number one position with an estimated $35M from 3,502 theaters for a per screen average of just over $10,000. The original film opened in October of 2014 to $37M so this is an impressive debut. Critics were mostly positive and audiences gave the film a solid B CinemaScore so the road ahead will be decent. With a budget of only $15M I’d expect more of Conjuring Universe to appear quickly. According to tracking, the film’s audience was 52% female with 54% of the audience 25 years or older.

Early Oscar frontrunner Dunkirk held on well once again, dropping only 33% in its fourth weekend to an estimated $11.4M, bringing its cume up to $153.7M so far. Overseas the film stands at $210M making for a worldwide total of $363M with big box office countries like China and Japan still to come.

Last week’s box office champ The Dark Tower lived down to its poor reviews dropping 59% to $7.9M bringing its cume up to only $34M. How this bodes for the projected TV series is anyone’s guess but the movie certainly isn’t exciting anyone. Look for a final total in the $45-50M range. In fifth place was Sony’s The Emoji Movie which made an estimated $6.6M this weekend bringing its total up to $63.6M after three weeks.

The year’s top grossing comedy held up well in its fourth go-around as Girls Trip made an additional $6.5M this weekend, according to estimates, bringing its cume up to $97M with the $100M club just around the corner. Another successful summer entry landed in seventh place as Spider-Man: Homecoming took in an estimated $6.1M bringing its total up to $306.4M after six weeks. Its 31% slide from last weekend was the best hold in the top 10. Eighth place belonged to Halle Berry’s Kidnap which dropped 47.8% in its second weekend to an estimated $5.2M bringing its total up to $19.4M. Look for a final total in the $25-30M range.

Debuting in ninth place was The Glass Castle. Based on the best-selling novel by Jeannette Walls, the Lionsgate release made an estimated $4.9M from 1,461 theaters for a per screen average of $3,337 – decent, but not great. Reviews were mixed, so the road ahead will be a small, side road but one that you take to your grandmother’s house in the country. Rounding out the top 10 was the hot and heavy action of Atomic Blonde which raked in an additional $4.5M, according to estimates, bringing its total after three weeks to $42.8M.

The top ten films grossed an estimated $97.1M which was down 37% from last year when Suicide Squad remained at number one with $43.5M; and down 25% from 2015 when Straight Outta Compton shocked the world with a $60.2M opening.