With Funny People hitting theaters, we run down the multi-hyphenate's finest work.

They may not have as much control over a film as they did during the days of Hollywood’s studio system, but producers still wields a great deal of clout, and despite the behind-the-scenes nature of the job, a great producer can draw audiences to a movie just as powerfully as a name director or major star. One such current producer is Judd Apatow, whose name has become a signifier for a certain brand of smart (and thoroughly bankable) comedy; since producing Anchorman: The Legend of Ron Burgundy in 2004, he’s been on an impressive roll, one he hopes to continue with this week’s Funny People.

Of course, Apatow isn’t just a producer; he’s also a director and writer, and Funny People — like Knocked Up and The 40-Year-Old Virgin before it — finds him occupying all three positions. Still, it’s his list of production credits that runs longest — and may contain a few surprises for those who haven’t been following his career closely — so we thought this would be the perfect time to give each of them the Total Recall treatment. We did get a little technical, and cut out the films where he served as an executive producer (bye bye, Heavyweights, Celtic Pride, Kicking and Screaming, and The TV Set) as well as associate producer (thus excising 1992’s Crossing the Bridge). Don’t worry, though — that still leaves us plenty to discuss. Ready to get started? It’s Total Recall time!

Well, it sounded good, anyway. Teaming up hyperactive Jack Black and deadpan Michael Cera for a Monty Python-inspired spoof of the Old Testament — with Harold Ramis behind the cameras and The Office‘s Gene Stupnitsky and Lee Eisenberg helping with the screenplay? Laughs galore, right? Well, not so much. At 16 percent on the Tomatometer, Year One is one of the bigger critical duds of the year so far, despite its stellar behind-the-scenes pedigree, two likable leads, and a supporting cast that includes such dependable comedy vets as David Cross, Paul Rudd, and Hank Azaria. What went wrong? It really depends on who you ask — some scribes pinpointed a lack of chemistry between Black and Cera, some simply found the movie dull, and some just couldn’t abide by the script’s aggressively lowbrow humor. As Eric D. Snider of Film.com wrote, “If you can’t take this premise and these actors and come up with anything funnier than Jack Black eating poop, then you have no business making comedies.”

Even if it had been the comedy of the year, 2008’s Drillbit Taylor would have been overshadowed by the public personal breakdown suffered the previous year by its star, Owen Wilson; in fact, the studio was reportedly so protective of Wilson that his promotional tour for the film was curtailed to the point that it probably would have dampened its gross no matter how solid the reviews or word of mouth might have been. Of course, as it turned out, Drillbit was dead on arrival anyway — it might have been based on an idea from John Hughes, but audiences and critics found this quickly forgotten comedy, about a homeless man who pretends to be a mercenary in order to scam some kids out of enough money for a ticket to Canada, a few shades less appealing than Pretty in Pink. As the Houston Chronicle’s Amy Biancolli put it, “Watching kids being forced to pee on each other isn’t actually funny. Neither is watching those same kids get chased down by a pair of thugs in a sports car.”

With loads of dark humor and a plot that took subversive aim at the entertainment industry, 1996’s The Cable Guy might have been a nifty little low-key comedy, if not for one thing: the obsessively reported $20 million paycheck that Jim Carrey took home for playing the title role. With Carrey’s rep and that kind of money at stake — not to mention Ben Stiller behind the cameras — Cable Guy had plenty of lofty expectations to meet when it arrived in theaters. As you probably remember, things didn’t exactly turn out as planned; critics were divided by its rough blend of grim laughs and Carrey’s trademark mugging (Chuck O’Leary of Fantastica Daily called it “hilarious”; Variety’s Leonard Klady deemed it “hopelessly disconnected and ultimately unsatisfying”), while American audiences didn’t show it the kind of love they’d had for, say, The Mask. Though it eventually turned a profit, earning more than $100 million worldwide, The Cable Guy went down as one of the black sheep of 1996’s theatrical flock — and for whatever reason, it would be eight years before Apatow produced another movie.

In most of his comedies, Will Ferrell plays a doltish man-child who has somehow managed to get past his obvious mental shortcomings to succeed in some wildly inappropriate career field — NASCAR, figure skating, network news. But for 2008’s Step Brothers, Ferrell and screenwriting partner/director Adam McKay dispensed with those niceties and simply developed a story about two unemployed nincompoops in their late 30s who are forced to confront their unwillingness to grow up (but not before spending an hour and change tormenting one another with disgusting pranks and physical violence). It was, in other words, the perfect setup for Ferrell and co-star John C. Reilly — and just the kind of film that you’d expect to pile up a $185 million worldwide gross while causing critics like Bruce Demara of the Toronto Star to call it “a movie of unrelenting idiocy featuring boorish behaviour, unrealistic character development and ludicrous plotting.” Still, some scribes got the joke, among them Tom Long of the Detroit News, who wrote, “Do not go to Step Brothers looking for anything remotely meaningful, sincere or spiritually enhancing. Go for a laugh. It’s got plenty of them.”

8. Anchorman: The Legend of Ron Burgundy

A cheerful combination of scatological improv, 1970s spoofery, and utter nonsense, 2004’s Anchorman: The Legend of Ron Burgundy proved two things: One, that Will Ferrell can be as ridiculous as he likes and still make money at the box office; and two, that there is always an audience for non sequitir gags like “I love lamp.” Its nearly $100 million gross also helped Apatow transition from critically revered but low-rated television shows into top-grossing feature films, and kicked off a prolific, profitable run that has grown to boast some of the most successful comedies of the last 10 years. Not bad for a movie whose final act rests on a conversation between a dog and a bear, right? Surprisingly for such a lowbrow movie, most critics were just as caught up in Anchorman‘s silly spell as audiences; though some were dismissive of its largely one-joke premise, the majority agreed with Stephen Hunter of the Washington Post, who decreed, “you will laugh. Then you will laugh some more. Then you will laugh still again.”

Apatow may have said it was inspired by Brad Pitt’s character in True Romance, but spiritually, 2008’s Pineapple Express is more of a cross between a Cheech & Chong flick and a quintessentially 1980s buddy action movie like Running Scared. It’s an inspired blend, to be sure — one rife with enough possibilities to transcend the occasional flabby spots in Seth Rogen and Evan Goldberg’s script, or a running time that may have been 20 minutes too long. Though most critics weren’t exactly bowled over by the Express, they were at least charmed enough by Rogen and James Franco (starring, respectively, as a cheeba-loving process server and his dealer) to nudge the movie into Fresh territory. Some scribes rejected it outright (Richard Roeper likened watching it to “sitting dead sober in a room with a bunch of stoned people who are laughing uproariously”), but Time’s Richard Corliss spoke for the majority when he called it “a comedy that brings a nicely deflating note of realism to action-film mayhem, as well as being one of the few drug movies you don’t have to be high to enjoy.” 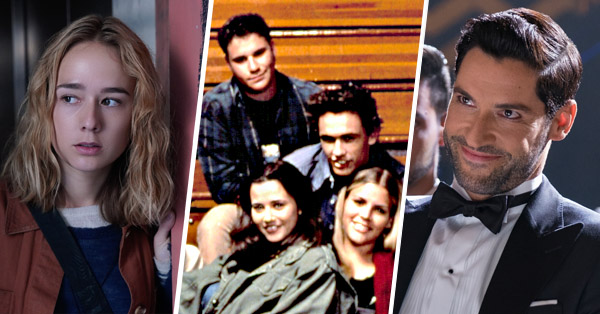 6 TV Shows You Should Binge-Watch This August