We look at some of the films that influenced George Lucas' epic space opera.

To the kids of the 1970s and 1980s, George Lucas’ original Star Wars trilogy seemed like it came soaring, fully formed, out of that galaxy far, far away, and its intoxicating blend of classic mythology and souped-up, effects-fueled action has made it one of the most widely influential sagas to come out of Hollywood over the last 40 years — as evidenced by the deafening buzz that accompanies every new installment in the franchise. But of course Lucas, like every filmmaker, stood on the shoulders of giants to build his masterpiece, and with this feature, we look back on some of the most obvious strands of Star Wars‘ DNA.

A princess and a scoundrel on a mission behind enemy lines, with a pair of squabbling nincompoops helping them along the way. Sound familiar? To anyone who’s seen Star Wars, Akira Kurosawa’s 1958 classic The Hidden Fortress will bear several distinct similarities, not the least of which is the way that — as George Lucas later pointed out — they’re both told from the point of view of “the two lowest characters.” Loose narrative similarities aside, there are other parallels between Star Wars and The Hidden Fortress, perhaps most notably Kurosawa’s deft way with kinetic action (there’s a horse chase whose swooping thrills aren’t altogether dissimilar from the Death Star battle) and their shared fondness for screen wipe transitions. It’s been argued that the similarities between The Hidden Fortress and Star Wars have been overstated over the years, but there’s no denying there are several good reasons why the Washington Post’s Rita Kempley called Fortress the “panoramic odyssey that inspired” Lucas’ saga.

Director John Ford inspired a slew of filmmakers across multiple generations — including the aforementioned Akira Kurosawa — and his shadow looms large over the Skywalker family saga told across the first six Star Wars films, primarily during the chapters that take place on the desert planet of Tatooine. Its desolate landscape bears distinct echoes of Ford’s The Searchers, in which a homesteader embarks on a grueling quest for revenge after his family is taken by natives — just as Anakin does in the prequels upon discovering the kidnapping of his mother Shmi. Anakin’s return to Tatooine and slaughter of the Tusken Raiders who took Shmi is essentially a sped-up version of The Searchers, and our glimpses of Tatooine in A New Hope — particularly the unforgettable sight of young Luke returning to his family farm to find it in smoldering ruins — owe an obvious debt to Ford’s somber, sun-baked classic. 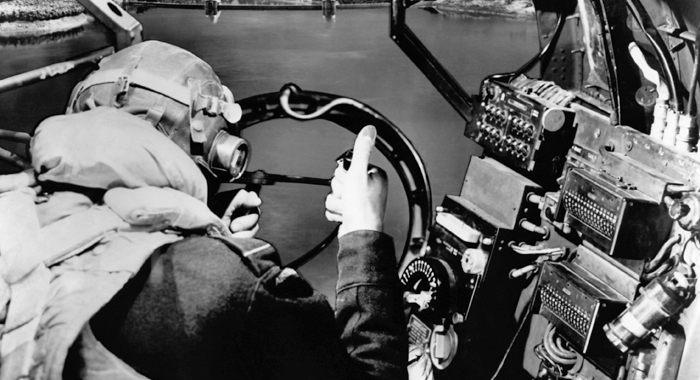 George Lucas drew on plenty of war movies for inspiration while crafting the climactic battle sequences for Star Wars, but while watching the Rebels’ first run on the Death Star, there’s one film that stands out in particular: 1955’s The Dam Busters, in which a squadron of Allied fighters sets out to blow up German dams by flying through a trench and dropping bombs at just the right time, angle, and velocity to send their payloads skipping across the water and into the wall. The story sets up an almost unbearably tense final act, from which Lucas borrowed liberally — not only visually (with the help of A New Hope cinematographer Gilbert Taylor, who managed The Dam Busters’ special effects) but fundamentally, lifting lines of dialogue like “Get set for your attack run” and “Look at the size of that thing.”

Metropolis serves as a fundamental building block for cinematic sci-fi in general, so it’s basically a matter of course that Fritz Lang’s classic magnum opus would exert some substantial influence on Star Wars — and on narrative grounds, that’s arguably very true, from Metropolis’ depiction of a fringe element desperately at odds against a ruling class to the inclusion of a main character with a mechanical hand. But Star Wars’ biggest debt to Metropolis might be the visual design of Maschinenmensch, the iconic female robot whose looks were obviously never far from artist Ralph McQuarrie’s mind while he was creating his concept art for C-3PO. Of course, at this point, George Lucas’ lovable jabbering droid is far better known to the mainstream audience than anything from Metropolis, but even if you’ve never seen it, take our word for it — Luke’s trusty golden-plated companion is a descendant of cinema’s first iconic robots.

George Lucas was so enamored of the 1936 Flash Gordon film serial that he tried optioning the rights to a new adaptation from producer Dino de Laurentiis — and if those meetings had turned out differently, he might have put his own stamp on the venerable comic franchise instead of opting to set out on his own with Star Wars. It’s therefore unsurprising that Lucas’ trademark trilogy ended up bearing the distinct stamp of the Gordon films, utilizing familiar filmmaking touches like the opening title crawl and “soft wipe” scene transitions as well as narrative components, such as Chewbacca (an analog of Flash’s leonine pal Prince Thun) and our heroes’ infiltration of the Death Star in disguise. Given how well things turned out with Star Wars, he probably would have put together a killer Flash Gordon, but don’t feel too bad for Flash — he did, after all, get his own 1980 movie, along with something Luke Skywalker never had: Queen on the soundtrack.

The original Star Wars trilogy’s arc pits insurgent rebels — our heroes — against a plainly authoritarian regime, but the overall saga’s point of view regarding power and those who wield it isn’t anywhere near as absolute as the kids of 1977 might have guessed while watching X-wing fighters swoop into those Death Star trenches. In fact, as we saw in the prequel trilogy, the Empire was once the Galactic Republic, and only morphed into the police state of A New Hope and beyond through a matter of lawfully enacted degrees. The line between democracy and fascism isn’t always as airtight as we’d like to think — which is why it’s sort of fitting that the joyous denouement of the first episode, in which our protagonists are paraded through a room full of Rebel soldiers and given medals for their heroism, bears direct visual echoes of a scene from Leni Riefenstahl’s Triumph of the Will, in which Hitler and his generals march before a huge army standing at attention.