Like much of America, the Rotten Tomatoes staff is working remotely right now, doing the responsible thing and “social distancing.” And like much of America, and the world, we’re spending a lot of our time – when we’re not working, of course – catching up on the shows and movies waiting for us on our watchlists, and digging around the various streaming services to find previously undiscovered gems. Every week for the next little while, we will be highlighting what our staff members are watching while at home in the hope that we’ll inspire you to discover something new and Fresh, and that you can watch along with us.

Rob McElhenney and the gang have delighted and disturbed audiences with their hit FXX show It’s Always Sunny in Philadelphia for nearly 15 years. Somewhere in there McElhenney (along with Charlie Day and Megan Ganz) found time to create Mythic Quest: Raven’s Banquet for Apple TV+. The new series chronicles the highs and lows of a video game studio run by a crew of misfits and eccentrics. At the helm is Ian Grimm (McElhenney), whose righteous self-absorption often rubs his lead engineer Poppy Li (Charlotte Nicdao) the wrong way, and pushes the game and workplace in myriad directions. Mythic Quest is a thoughtful and hilarious celebration and critique of a complicated industry. The fifth episode, written by Katie McElhenney and directed by Rob (and starring New Girl’s Jake Johnson and Fargo’s Cristin Miloti), is especially breathtaking. You’ll never look at shovels (or flashlights) the same way again. – Haña Lucero-Colin, TV Curation Manager

Where to watch: Apple TV+

This Netflix four-part limited series initially presents itself as unassuming as its main character does in the drama, but minutes into the first episode, the rich inner life of an ultra-Orthodox Jewish girl escaping the oppression of strict religion leaps from the screen. Shira Haas plays Esty Shapiro, a 19-year-old  New Yorker who, unhappy in her marriage, flees to Berlin. As Esty’s story unfolds, the series, based on the bestselling memoir by Deborah Feldman, reveals how damaging forced ignorance can be to individuals, families, and entire communities. Diminutive Haas gives an award-worthy performance that is both deeply rooted and ethereal simultaneously, as the saddest Manic Pixie Dream Girl ever gets fed up with being the supporting character in her husband’s life and embarks on her own heroic tale. – Debbie Day, Sr. TV Editor 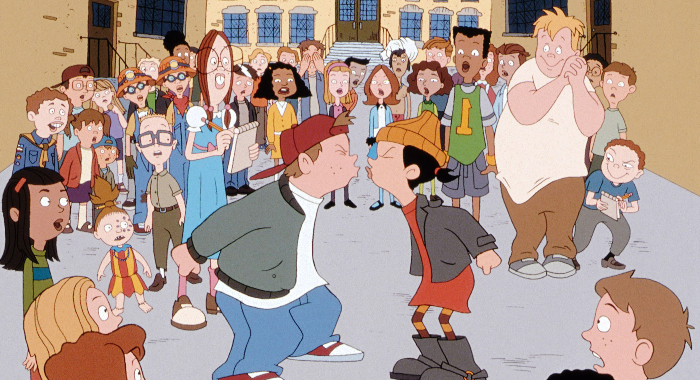 Recess tracks six 4th-grade friends and their rabble-rousing escapades on the school playground. The blacktop and grassy field of the series are depicted as a mythical arena, promising vast personal freedom away from chores and homework, yet demands conformity through rigid class hierarchy. That’s because all the children, lords of flies and rubber balls, have created their own top-down society. They’ve built a monarchy ruled by a 6th-grade king, with a punishable unwritten code of conduct, where identity and reputation are everything. It’s a complete, utterly amusing microcosm. Watching Recess in 2020 is certainly a nostalgic and comforting experience. But this was always a nostalgic show, even when it was airing new. It feels like it was written by actual empathetic adults, with each segment taking a core emotion or question from their own childhoods and exaggerating them to comedic extremes. And in doing so, they find wisdom and the departing lesson, revealed with the distance of time. Each episode is comprised of two standalone 10-minute segments, so there’s no waffling about with the plot; in fact, I still haven’t encountered such ruthlessly efficient dialogue and slapstick, scaled to a kind of screwball tempo, in television entertainment – children’s or otherwise. – Alex Vo, Film Editor

Where to Watch: Disney+

The Witcher is an action-fantasy series based on author Andrzej Sapkowski’s novels, which spawned a wildly popular video-game franchise, but you don’t have to be a fan of those to enjoy it. It has a bit of everything: action, horror, romance, and – maybe surprisingly – humor. You’ll follow the intertwining storylines of intriguing characters, including the titular man himself, Witcher Geralt of Rivia (played by Henry Cavill), as he slays monsters on his journey to find and protect the young princess Ciri. Geralt is joined by his loyal companion, Jaskier the Bard, who quickly became a fan favorite with his humor and cheeky songs, including “Toss a Coin to Your Witcher,” which will most definitely get stuck in your head after the first time you hear it. The narrative is confusing at first – the show plays with time and chronology – but stick with it, because once you make it to episode 4, “Of Banquets, Bastards and Burials,” the characters’ storylines come together. The Witcher pays off and will leave you anticipating season 2. – Lucy Bruckner, Producer

In The Other Two, millennial siblings Brooke (Heléne York) and Cary (Drew Tarver) are in thrust into the shadow of their 13-year-old brother Chase’s (Chase Walker) spotlight when his song “Marry U at Recess” goes viral. Former teen dancing star Brooke and struggling actor Cary have both been scraping by for years when their younger brother becomes famous literally overnight. The series offers a fascinating look at the inanity and indignity of showbiz in the digital age; the rules have changed, but the sheer nonsense stays the same. Molly Shannon is brilliant as the Midwestern Mom, and the show never forgets to hammer home that Chase is still just a kid. It’s hard to imagine that viewers of any of age will be surprised by the manufactured details of celebrity life, like Chase’s fake relationship with another teen superstar, but they all land with big laughs in this cringe-comedy.

I recently finished Hilary Mantel’s award-winning historical novels, Wolf Hall and its sequel Bring Up the Bodies, which both follow the quick rise to power of the wise, decent, and secretive Thomas Cromwell in Henry VIII’s court. They’re dense books, and take some time to get into, but once you acquaint yourself with the rhythms of Mantel’s incredible prose – and develop a functioning knowledge of the endless list of characters involved – the story is frankly… bingeable. In Mantel’s pages, you get to witness the rise and fall of a ruthless Anne Boleyn, step behind curtains for political treachery and backstabbing, and even learn a bit about the history of England. And there’s plenty of twists and turns and sex and violence and all that good stuff, too. The BBC adaptation of the two books – which are combined into one miniseries – is a similar experience: A little slow and potentially challenging at first (this is definitely not The Tudors), but once you adjust to its deceptively relaxed rhythms – and, yes, get to know who’s who – you’ll be hooked. And it boasts a formidable cast: Mark Rylance as Cromwell, Damian Lewis as Henry VIII, and a pre-Crown Claire Foy showing us the star she would become as Boleyn. Mantel just released a third book in the series; here’s hoping we get a follow-up miniseries to go with it. – Joel Meares, Editor-in-Chief

Where to Watch: Amazon, iTunes, Vudu