What We Do In the Shadows: 6 Things to Know About Season 4

From Baby Colin Robinson to a supernatural night market, the cast and producers of the vampire comedy have found new ways to suck in viewers.

FX’s Emmy-nominated comedy series What We Do In the Shadows returns for its fourth season at 10 p.m. on July 12.

The mockumentary-style show, which is based on Jemaine Clement and Taika Waititi’s Certified Fresh film of the same name and which has recently been renewed for fifth and sixth seasons, centers on the inhabitants of a definitely not-at-all creepy house in Staten Island: married vampires Laszlo (Matt Berry) and Nadja (Natasia Demetriou), the looking-for-love Nandor (Kayvan Novak), energy vampire Colin Robinson (Mark Proksch) — who is experiencing a sort-of rebirth this season — and the human who puts up with it all, Harvey Guillén’s Guillermo de la Cruz. 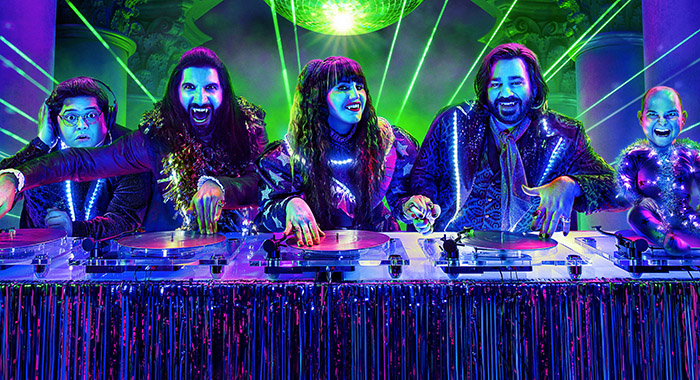 The third season of the series, which has the rare honor of being Certified Fresh with a 100% Tomatometer score, ended with the housemates going on separate journeys: Colin Robinson dying, Nandor to the country that now occupies his homeland, Nadja to London to work with the government organization Vampiric Council, Guillermo going with her (without his consent), and Laszlo staying home as he attempts to raise the baby energy vampire that crawled out of Colin Robinson’s carcass.

The fourth season picks up a year later and reunites everyone back at the house. But things aren’t how they left them. During a press panel to promote the season, series executive producers Paul Simms and Stefani Robinson as well as the series leads and Kristen Schaal, who plays the unnamed vampire known as The Guide, chatted about what’s in store for the series’ new season and the mythology of the series.

1. The House Could Use an HGTV-Style Makeover 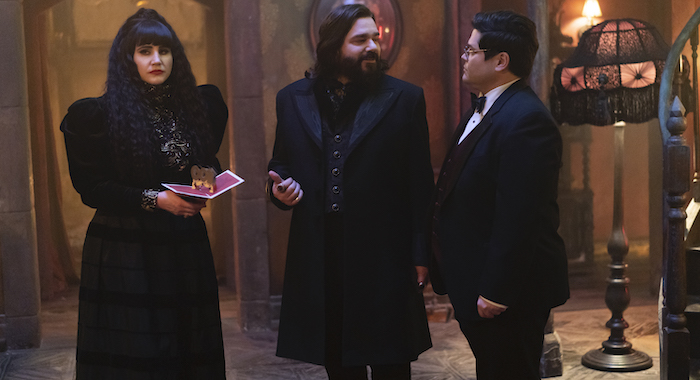 With Laszlo left as the only adult vampire in charge of the State Island estate, the roommates’ house has some serious infrastructure problems.

“Laszlo is someone who is happy just to sit on a couch with an old horse blanket around him,” Simms says. “Laszlo is not going to do housework, basically.”

This means piles of packages, wild animals running about, and tree branches through the roof.

2. Romance Is Coming For Nandor and Guillermo 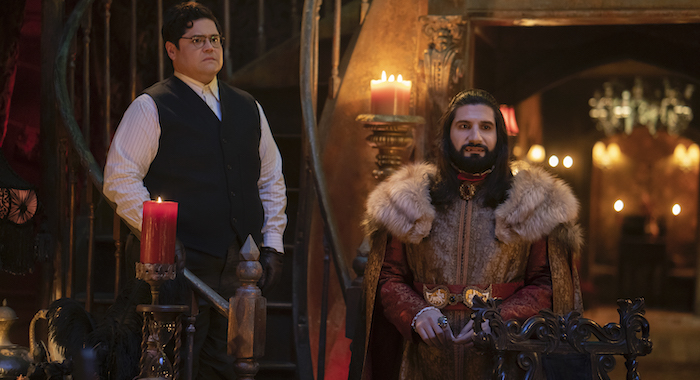 Having attempted to return home and finding it not to his liking and also experiencing many failed relationships, Nandor has decided that he would like to get married. Putting the cart ahead of the horse, he asks Guillermo to be his best man before he’s met his mate. Guillermo is honored and the move keeps him in the house a little longer. However, Simms promises that “both Nandor and Guillermo find love this season.”

“Being away from the group, Guillermo has realized a lot of things about himself,” Guillén says. “They’re both after love he comes back with a better understanding.”

He says that Nandor and Guillermo “still have this mutual love for each other” and that “I think their love is really great and deep, but it’s not always in a relationship form.”

Also, while the series has already introduced Guillermo’s mother Silvia (Myrna Cabello), the new season will introduce his entire family.

As far as Nandor and his potential wife, Simms says that there will be problems with “Nandor wanting her to be the perfect wife and maybe wanting to change her a little bit — and maybe almost to the point of changing her too much to like the same things that he likes.”

2. Nadja Releases Her True Passion in (After)Life Is To Open a Vampire Nightclub

Simms says that “the vampire nightclub is mainly for vampires. But also they like to get some humans in there so that the vampires have something to drink.”

In the plot of this episode, Simms says that there was to be “a big vampire act who canceled their performance at the nightclub at the last moment and Nadja and The Guide have to go and do some wheeling and dealing.”

3. Staking Out Some Stunt Casting 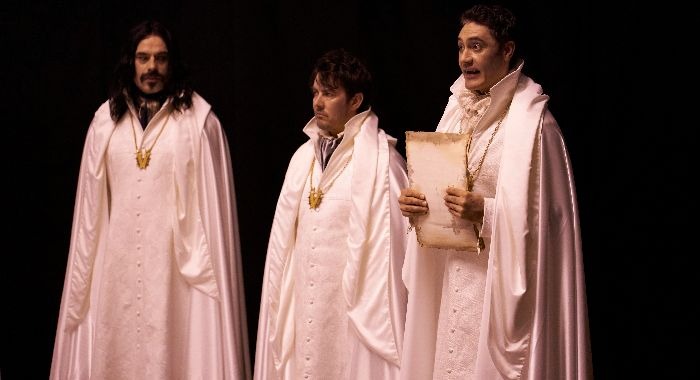 Simms is aware that another vampire show, HBO’s True Blood, also had a vampire nightclub and says that this won’t mean there will be cameo appearances from those actors in his show’s nightclub episode — although there is an open invitation for any True Blood alums or anyone else who has ever played a vampire in anything to appear on this show.

It’s not surprising that fans would expect to see faces from the other program. The series, famously, devoted a whole episode to casting actors who once played vampires in other roles as actual vampires.

He doesn’t want to spoil too many of the cameos this season, but guest-star-for-hire Fred Armisen will be there to play a “Eugene Landy to Brian Wilson”–type figure. 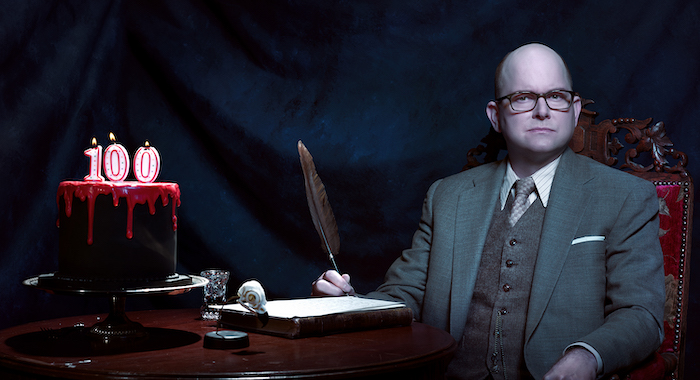 Despite not knowing that energy vampires automatically expire at age 100, last season Colin Robinson went to bed with a stomach ache on his centennial birthday and never woke up. He didn’t stay dead long, however; a baby Colin Robinson clawed his way out of the housemate’s stomach, and Laszlo decided that he needed protecting in the hopes that he could save this new life from becoming an energy vampire.

“Now Colin is a very, very active child with way too much energy,” says Simms, explaining that the new Colin doesn’t get his power from boring people to death — he makes you feel the way that parents of young children have been feeling these past two years.

“I do quite a lot,” Proksch promises. “It’s stuff that I’d been wanting Colin to do for season 1 that I thought would be funny. We’re able to do this season.”

Simms says one episode features Laszlo and Baby Colin Robinson joining their neighbor Sean (Anthony Atamanuik) on a hunting trip. Instead, Laszlo tames the animals by playing a magical flute. 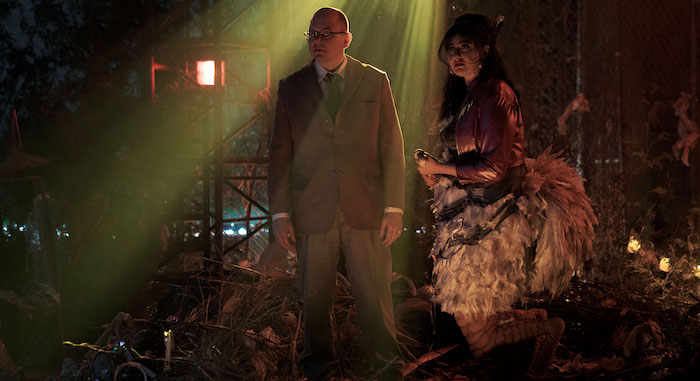 The show isn’t just about vampires, though. Previous seasons have featured werewolves, a siren, a familiar-turned-zombie, and a troll who did online trolling. This season, there’s a genie who grants 50 wishes.

Robinson says there’s a list of mythical creators they hope to work into the show. Simms says there’s an episode this season called “The Night Market” “where all the supernatural creatures in the city gather in a hidden place to barter and trade with each other.”

6. The Premise Is Still That This Is a Documentary 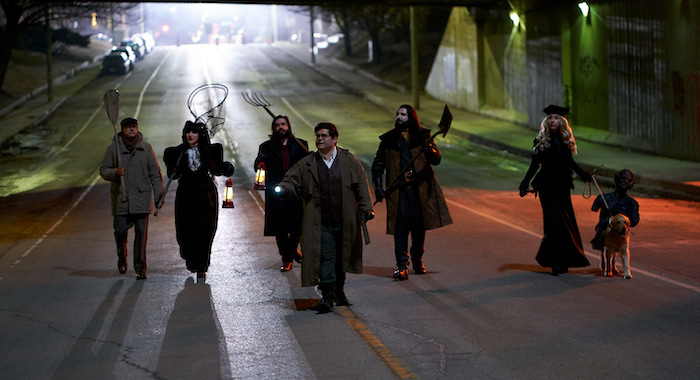 Simms and Robinson say that the writers do keep it in mind that they’re making a mockumentary and that perhaps that film’s crew is changing each season — you know, in case someone doesn’t turn up to work one night. Schaal suggested that the documentary crew should also be vampires, while Simms says questions surrounding the documentary and its filmmakers will be answered by the end of the series.

Robinson says that the writers have researched textbooks and other vampire programs about the various rules and lore created for what vampires can and cannot do (one involves throwing rice on the ground so that they have to count each kernel while the human escapes). They decide what to include by “sussing out which, of the more weirder vampire-y things maybe could be an interesting story.” 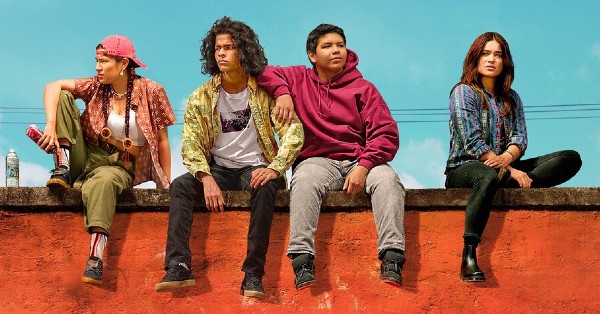