What to Watch With Deadwood: The Movie Star Kim Dickens

The former Fear the Walking Dead star reveals what TV she's obsessed with and how exciting it was to reunite with her Deadwood castmates on the long-awaited film. 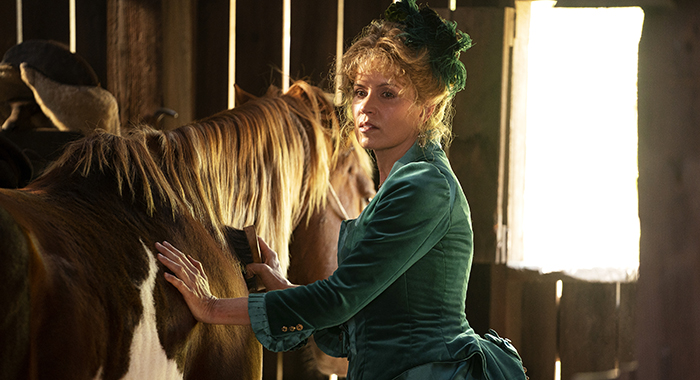 When Deadwood premiered on HBO in 2004, it joined a lineup that included The Sopranos, Six Feet Under, and The Wire. The foul-mouthed Western series fit right in on the premium cable channel, but was canceled in 2006 after three seasons on the network. Since then, fans and even its stars have been clamoring for more. After more than a decade, the long-awaited closure is finally here: Deadwood: The Movie brings back the original, expansive cast for a two-hour wrap-up film written by series creator David Milch and directed by Daniel Minahan. (For a refresher on the series, check out this primer of everything you need to know before watching the movie.)

Star Kim Dickens, who is reprising her role as brothel owner Joanie Stubbs, spoke with Rotten Tomatoes about reuniting the Deadwood gang for the film, but not before sharing what she’s been watching lately (like everyone else, she was also glued to Game of Thrones‘ final season). Below, find out what’s on her streaming queue and what it was like for her to revisit the 1800s. 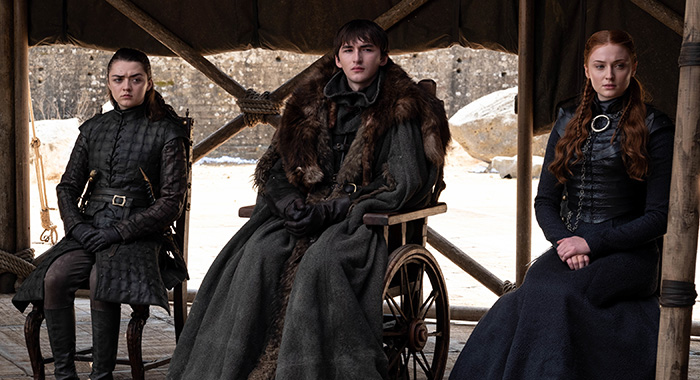 Right now I actually have more than I usually do. My best [ones] are Veep, Barry, Game of Thrones. So I’m doing a lot of HBO right now. And Fosse/Verdon.

I haven’t streamed the whole thing yet — I’ve gotten past episode 3, but I love Dead to Me on Netflix. The other streamer that I am behind on is The OA. I’m telling you right now, it’s just been a flood of great ones for me. Because I’ve gone through some dry spells where I’m like, yeah, there’s nothing I want to watch. But right now it’s just a flood of great stuff.

I have Killing Eve in there waiting for me to catch up. That’s a super fun one. I’m a little behind on that one. 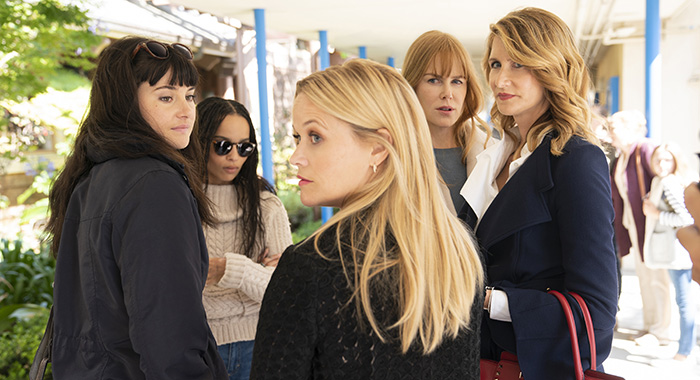 I just can’t believe how much I’m watching right now. And I’m so sad to see Veep go. Like, it’s killing me. It’s really tearing me up inside that that’s done this season. I don’t know what’s coming. I can’t even imagine. I might be missing something! But I feel so, I feel so overwhelmed with gratitude for everything right now. It’s so delicious. Fleabag, I haven’t seen that yet. I saw the first one and it was great. Big Little Lies — that was a delicious one for me too, so I’m looking forward to that coming back.

Debbie Day for Rotten Tomatoes: What was it like to get back together with the Deadwood gang? What was the first day of filming like?

Kim Dickens: Instead of getting the band back together, we got the c—suckers back together. Day one I would consider the read through. That was pretty magical. You know, when the whole cast gets together with the producers and writers and the network, HBO. It was a remarkable experience for all of us. I’m almost flushed right now while I think about it, and while I relive the first moments of that table read. I mean, everybody was overwhelmed with tears and laughter and joy. We just launched right into it. Actually, the opening lines of the movie are pretty great. They’re delivered by Calamity Jane and me. She almost couldn’t get through those first few lines without having a lump in her throat.

I think it was a gift to us as well. I’m glad. I hope the fans will feel really satisfied with it, and I think they will. Day one of filming I wasn’t there. Day three of filming I was there, and I was also there on the final day of filming. Before we filmed I was able to walk around [the set] and I was actually on the ranch and doing fittings and stuff. So we were getting geared up to it, but my first scene and first day on set was in the Bella Union, in Joanie Stubbs’ bedroom, in the bed with the mother of characters. So it was pretty much baptism by fire, right back in it. I couldn’t have been happier. It actually happens to be one of my favorite scenes in the movie. I mean, I have so many favorite scenes in the movie, but that one just felt so quintessentially Deadwood, you know? 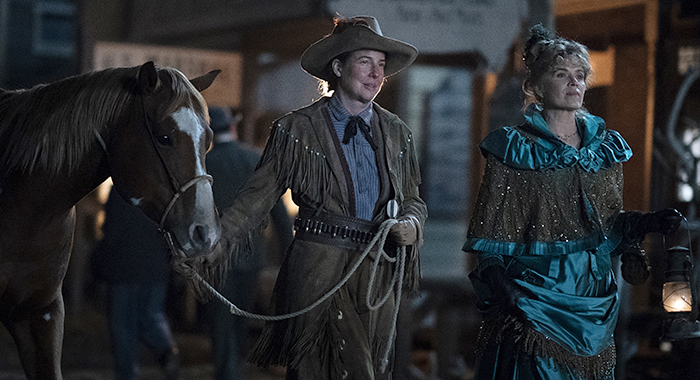 Most actors aren’t able to revisit a character, but in the age of so many reboots and revivals it’s happening more frequently. What has that experience been like for you? Do you like being in her shoes again?

It was great to be back in her shoes again, walking around in the muck and the mud, and donning the top hat again. It was remarkable, really. Ever since it was unceremoniously canceled after three seasons there had been rumors of, “Well, we’re going to do two movies.” They talked about two movies forever. And then the rumors would come up that they were trying to do that, trying to do that, but it’s a long ways off. And then there would be rumors at times through the years, “Oh, absolutely not, it’s never happening.” So it was a bummer.

We all stayed in touch. We all cherished the experience of Deadwood and working with David Milch and working with each other and production, everybody. Everybody was incredible on that — the production designer, the costume designer, cinematographers. … More than just hoping we’d get to go back to it, which is part of it, we hoped that we’d get to finish the story in a way.

It was such a beautiful piece of art and with such a passionate fan base that I thought it was a real disservice for HBO to cancel it. Of course there are so many determining factors that make those decisions. I’m not a studio, I’m not a network, so whatever they do is beyond my understanding, but from an artistic point of view, and if you’re embracing a show like that for what it is, which is a creative gem, then I think you owe it to the audience who you’ve asked to stay dedicated. And so finally, 12 years later, we’re doing it. It really felt surreal, I think. it was so long. The story is told on our faces; it’s been so many years. 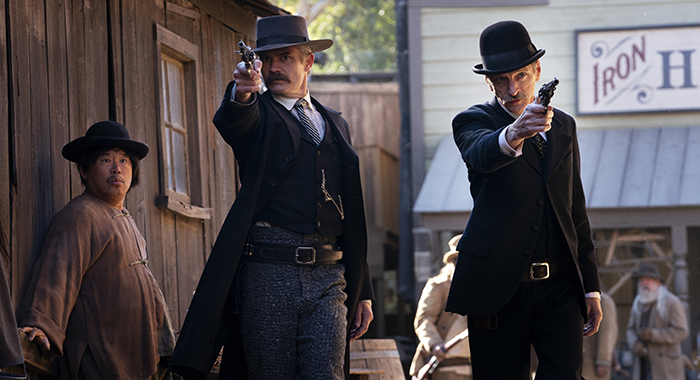 As a refresher, can you remind us where we left your character and where we’re picking up with her now?

You know what? I was rewatching the series, which was just a delight to do. I think I left off — I’d started a school. … Joanie Stubbs was making a more respectable woman of herself. I think Stubbs always had a reverence for what is not sinful, and always felt like she could not even get near anything that was not shameful. So to see her make those strides and to do something of worth and purpose shows such a terrific growth for her. And then when we find her 10 to 12 years later, she flipped back on her heels a bit, I guess you could say She’s fallen back a bit into addiction, a little under water. And then we’ll watch her journey from there. She’s lost Cy Tolliver. She’s regained The Bella Union. The price is just good. It’s run down, as is she.

She’s still a woman of means, though. Right?

Yeah, she’s still running the joint. She’s not at her best and has taken some hard times. Whatever support systems she had, be it positive and negative at times, is now gone.

The language has always been its own character in the show. Did returning to that feel the same? Or did you have a new view of it?

It did feel exactly the same. It’s the same poetry. I believe it’s metered, actually. It comes from David Milch and his genius and his staff that he works with. At first it was a little like, “Oh, god! I’ve gotta get those muscles loose again,” because there’s been nothing else like that in the interim. When you’ve got any sort of Shakespeare or any sort of heightened dialogue it sounds a little daunting at first. And then I started rewatching the series, and it’s kind of like riding a bike. When I got the script, I knew the character. I knew the language. It had just been a long time. But it’s so beautiful. if you’re familiar with it, you already know. I didn’t have to relearn it. It was already still in my muscles. 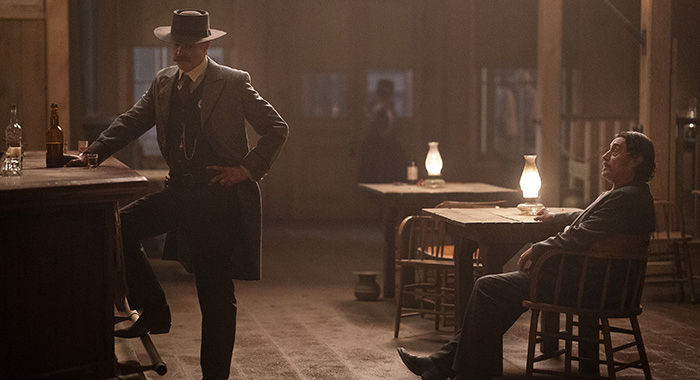 Is there any concern about attracting new fans to the movie?

Not for me as an actor. I’m much more artistically minded in it. You certainly don’t like to go and feel like you have to lay down some exposition or hand-hold your audience, because we never did that. It was mostly a piece where it was so compelling that audience leaned in. And if they were getting it or not, they were still leaning in, and finally they just started to feel the love and humanity of the whole thing.

I would hope that our movie does the same thing with the richness and the characters and the richness of the storytelling. That people will be tuning in and following to it as an experience even if they don’t know the characters yet. And then how delightful would it be for a new audience to see it and get to go back and see the other stuff? I think that would be very exciting for them. So hopefully it will work the way it’s supposed to work. I feel like HBO had a desire for it to speak to the old fans and a new audience. I think they would want that. I’m sure that’s a business model that would be desirable for them. It could do both.

It’s not very often that a movie inspires people to go back and watch the series.

Yeah, it’s remarkable. Our storytelling was in the episodic format. It was a very patient form of storytelling. It was in the beginning of what I think is the golden age of television, when it sort of turned that corner with The Sopranos. We were right there with it. It offered up a very nuanced form of storytelling and character development. No hand holding. And to be pushed into a two-hour format to tell a long-form story was, I’m sure, tricky.

I said to Robin Weigert last night, “Look, if they want to see Deadwood as a radio play or an animated series, we’ll do it. We’ll do whatever form.” 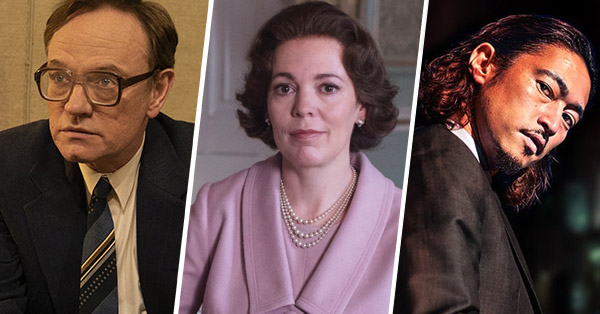 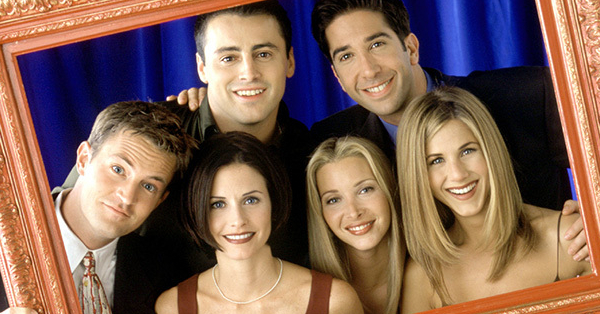 Everything We Know About HBO Max Streaming Service