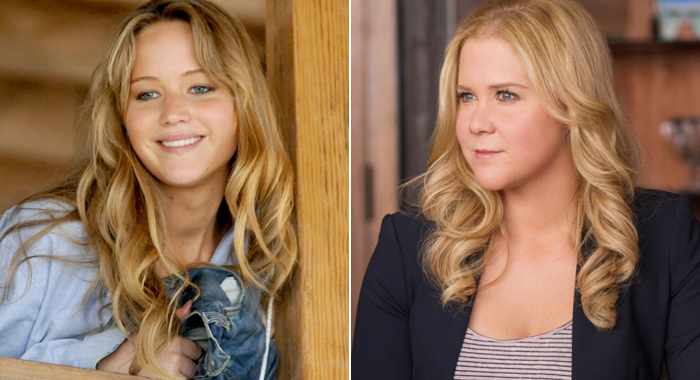 Social media feeds and the sites that “feed” them have been all aflutter this summer with coverage of the new friendship that has formed between Hollywood’s highest paid actress (Jennifer Lawrence) and the star of Trainwreck (Amy Schumer). There was that time when they formed a human pyramid on a yacht, and they danced on Billy Joel’s piano together. This week, we learned that the summer of 2015 hasn’t been all fun, games, and big-knee-shaped-bruises-on-your-back, as the two stars have also been working (“Stars, they’re just like us!”, as US Weekly might put it).  Amy Schumer and Jennifer Lawrence are now reportedly about 100 pages into writing a comedy movie that they will star in together (the average Hollywood screenplay runs about 120 pages).  Nothing much is known about this particular script, except that Lawrence and Schumer will play sisters.  Meanwhile, Amy Schumer has also written a separate comedy script for 20th Century Fox with her actual real sister, Kim Caramele, which will be a mother-daughter comedy.

Netflix is increasingly stepping up its production slate to include original feature films (some of which will get theatrical releases) as well original series. One of the latest filmmakers to sign on with Netflix is Christopher Guest, best known for mockumentaries like Best in Show and A Mighty Wind, which he has made with mostly the same ensemble cast. This week, we learned that many of those actors and comedians will indeed be returning in Mascots. This new comedy will be set in the world of sports mascots, those people in the oversized foam outfits who entertain crowds between plays. Joining Guest for sure in Mascots will be Jane Lynch, Bob Balaban, Jennifer Coolidge, John Michael Higgins, and Parker Posey. It’s not yet known if some of Guest’s other regular players, like Eugene Levy and Catherine O’Hara, will also have roles in Mascots.

2. JOHN C. REILLY TO STAR IN WESTERN THE SISTERS BROTHERS

Although his roles in Will Ferrell movies like Step Brothers and Talladega Nights might inspire one to think of John C. Reilly as “just” a comedian, the actor has also worked with several “serious” directors, such as Martin Scorsese (Gangs of New York, The Aviator), Paul Thomas Anderson (Boogie Nights, Magnolia), Robert Altman (A Prairie Home Companion), and Roman Polanski (Carnage). This week, we learned that Reilly will add another acclaimed director to that list, in the form of French filmmaker Jacques Audiard (A Prophet, Rust & Bone), in what will be the director’s English-language debut. Reilly and Audiard will be teaming up on an adaptation of the comic Western novel The Sisters Brothers, by author Patrick DeWitt. John C. Reilly will play one of the title characters, sibling hired guns who travel to San Francisco during the California Gold Rush to murder a prosecutor.

3. BRYAN CRANSTON JOINS JAMES FRANCO IN COMEDY WHY HIM

This year will mark the 15th anniversary of Meet the Parents, in which Ben Stiller and Robert De Niro came into conflict as potential son and father-in-law. It’s indeed a decades-old set up for comedy, and one that keeps on ticking, because this week, another such comedy made the news. Bryan Cranston (Breaking Bad) and James Franco (Freaks and Geeks, to keep up the TV references) will star in a 20th Century Fox comedy called Why Him. Cranston will play a “Midwestern dad” who travels with his family to see his daughter at college to find that she is is dating a “brash tech billionaire” (Franco).  John Hamburg (Along Came Polly; I Love You, Man) will be directing from a screenplay he cowrote when filming starts in Los Angeles in February.

It’s something of an old Hollywood cliche that pitch meetings involve “X meets Y” analogies. For example, you could say that Ant-Man was “Ocean’s Eleven meets Honey, I Shrunk the Kids.” This week, Anne Hathaway became attached to star in a science fiction comedy called The Shower, and the synopsis totally read as something like “Bridesmaids meets This is the End (or if it had been more successful, The World’s End).”  The Shower of the title has a double meaning, as the guests at a baby shower are threatened when a meteor shower turn nearby men into “blood-hungry aliens.” The Shower might also end up resembling next year’s Pride and Prejudice and Zombies, another case of women banding together against monsters, within the constraints of social niceties. Hathaway was newly available for The Shower after another of her projects, the giant monster movie Colossal, was recently put on hold.

With Marvel Studios (and their counterparts at Fox, adapting Marvel titles) having so many projects in development, it’s almost requisite for this column to devote at least one spot each week to their films. This week, the obligatory Marvel headline goes to casting news for both Marvel Studios’ Doctor Strange (11/4/16), and 20th Century Fox’s solo movie for Gambit (10/7/16). There have already been a few roles cast for Doctor Strange, including the title role (Benedict Cumberbatch), the Ancient One (Tilda Swinton), Baron Mordo (Chewitel Ejiofor), and a rumored role for Rachel McAdams. This week, we learned that Danish actor Mads Mikkelsen (Casino Royale, The Hunt, TV’s Hannibal) is in early talks to costar as one of Doctor Strange’s adversaries; what was left unsaid is which of Strange’s enemies he might be playing. Two strong possibilities are Dormammu, who many consider to be Strange’s main nemesis (and who’s head is covered in flames, so anyone could play him), and Nightmare, who was actually Doctor Strange’s very first enemy.  (This writer also thinks that Mads Mikkelsen sort of resembles the way Nightmare is usually depicted in the comics.) Meanwhile, over at 20th Century Fox, French actress Lea Seydoux (Mission: Impossible – Ghost Protocol, the upcoming James Bond film Spectre) is now in talks to play the romantic lead Bella (AKA Belladonna) in the solo Gambit movie, starring Channing Tatum. Another Mission: Impossible costar, Rebecca Ferguson, had also been in the running for the role, but she recently took one of the lead roles in the upcoming novel adaptation The Girl on the Train.

6. JULIUS CAESAR TO RECEIVE HIS OWN FRANCHISE CALLED EMPEROR

With The Hunger Games ending this year, Lionsgate will have very few franchises left, outside of the remaining Divergent movies. That might be why the studio has started development on adapting the five books in author Conn Iggulden’s Emperor series, about the life of Rome’s Julius Caesar.  The first movie, which will also be called Emperor, will be based upon the first two books in the series, The Gates of Rome and The Field of Swords, which establish the friendship between Julius Caesar and Marcus Brutus, who eventually betrays his friend (in the fifth book of the series). Emperor appears as though it’s being adapted by committee, with four different screenwriters working the first two books into one script. Those writers are William Broyles Jr (Cast Away, Apollo 13), Stephen Harrigan (Hallmark’s Cleopatra mini-series), Ian Mackenzie-Jeffers (The Grey, Death Sentence), and Burr Steers (17 Again, next year’s Pride and Prejudice and Zombies).

ROTTEN IDEAs OF THE WEEK

Both movies are now over 10 years old, and his career has gone completely different places since, but Joaquin Phoenix actually costarred in Signs (2002) and The Village (2004) for director M. Night Shyamalan. It’s also been over 10 years since one of M. Night Shyamalan’s films as director received a Tomatometer score over 25 percent.  Joaquin Phoenix’s career, on the other hand, has benefitted from an opposite, more positive swing, with three Certified Fresh films (The Master, Her, and The Immigrant), and only one Rotten score (Irrational Man). So, this week’s news that Phoenix is in talks to reunite with Shyamalan on the director’s next film has us divided on precisely where this story should land. There are no plot details for this next film as of yet, except that it’s expected to be a lower-budget film, and filming is scheduled to start in Philadelphia in November.

This year’s critical and box office hit Mad Max: Fury Road obviously did not create the post-apocalyptic genre (though an argument could be made that The Road Warrior played a big part in popularizing it). The movie’s success did, however, demonstrate to Hollywood that it is possible for a movie in the mid-2010s to be a post-apocalyptic success without being a girl-friendly YA adaptation (like The Hunger Games, Divergent, etc.). And so, development executives are re-examining what pre-existing properties like Mad Max are out there, and very popular. From the world of video games, the #1 franchise like this is probably Fallout (the legal rights to which have been debated in court in recent years).  But (especially if you expand the definitions of “post-apocalyptic”), the #2 franchise is probably Borderlands.  So, that’s probably part of why Lionsgate has started development of a  Borderlands movie.  There have been three first-person-shooter Borderlands games to date, and two of them are set on a world called Pandora (yes, just like Avatar, except this one’s a desert), a colony world abandoned by corporate interests before the game’s start. The Borderlands games are popular, and have a quirky, appealing humor. However, we’re calling this story the Rotten Idea of the Week, because following the failure of this summer’s Pixels, video game adaptations still most often receive Rotten Tomatometer scores.