How to Watch the Olympics: Tokyo Olympics TV and Streaming Schedule

Find out when and where to watch some of the 7,000 hours of Tokyo Olympics — technically the 2020 Olympics — programming and related specials with our ongoing updates to this handy calendar.

Let the games begin! After a yearlong delay, the 2020 Tokyo Olympics are now set to commence with the Opening Ceremony on July 23, 2021. The time difference between Japan and the U.S. means that NBC’s live coverage of the events will happen in the early hours of the morning for U.S. viewers, and will largely happen on streaming service Peacock.

The primetime coverage will include popular events — exact schedule to be determined — with a heavy emphasis on Team USA. Overall, NBC and its subsidiaries (including NBC Sports Network, USA Network, CNBC, the NBC Olympics channel, the Golf Channel, Telemundo, Peacock, NBCOlympics.com, and NBCSports.com) will be broadcasting 7,000 hours of Olympic coverage over the two-plus weeks of competition. And that’s not including specials and documentaries on NBC, plus sports- and Olympian-focused programming on other networks throughout the duration of the games, which run from July 23 through August 8.

Increased COVID-19 safety protocols mean the events will take place without spectators, but NBC has a robust staff on the ground — including news anchors, daytime and late-night hosts, and more — covering the entire Olympics. Live coverage kicks off in the wee hours of July 23, thanks to the 13-hour time difference between Tokyo and the U.S. East Coast, and the opening day programming will include a live broadcast of the opening ceremony, a special edition of the Today show with athlete interviews and reactions, and an NBC Olympic Daytime show before a primetime broadcast of the opening ceremony highlights.

Read on to find out when and where to watch the biggest events — we’ll continue to update as the Games go on — as well as all the other Olympics–themed programming available on broadcast and streaming networks over the next few weeks.

The streaming service will not only host a Tokyo Olympics destination featuring live coverage of some of the Games’ biggest events — including gymnastics, track and field, and basketball — it’ll also include new daily live shows, original programming, full event replays, curated highlights, and Olympics channels. All of the coverage will be available to stream for free except the USA Men’s Basketball live coverage, which is only available to Peacock Premium subscribers. Six new Olympics channels include Tokyo Now, plus Great Moments (a collection of the most thrilling moments of past Olympics), Meet the Olympians (profiles and documentaries about top athletes, past and present), Must-See Moments (buzziest moments from past Games​​), Team USA (highlights of Team USA competing for gold medals in Tokyo​​), Tokyo Flame (an always-on livestream of the Olympic flame​ for people who just want to bask in the glow of the Games). Amber Ruffin, Kevin Hart, Snoop Dogg and more will all contribute to the programming.

Olympics-themed programming available on broadcast and streaming networks over the next few weeks.

Tokyo Gold: A comprehensive look at the most compelling performances of the day: outstanding moments with in-depth packages, expert analysis and athlete interviews as daily competition concludes; Tokyo is 13 hours ahead of New York. 11 a.m.–12 p.m. ET; Repeats every hour between 12 p.m. and 7 p.m Monday through Saturday and 12 p.m. and 6 p.m. on Sunday, Peacock.

On Her Turf at the Olympics: Celebrating female athletes competing at the Games with features, interviews and timely coverage. 7–7:30 p.m. ET, and one hour earlier on Sundays, Peacock.

Tokyo Tonight: Fast-paced highlights of events as they happen. Interviews, features and live reports from Tokyo to make the viewer feel like they’re at the Games. 7:30 p.m.-midnight ET, and one hour earlier on Sundays, Peacock.

Wednesday, June 30
Strive: This six-part docuseries is about the astonishing men and women forced to flee their countries as refugees all while training for the once-in-a-lifetime opportunity to compete in Tokyo 2020. Hosted by Gold Medalist Gabby Douglas, Strive follows the journey of refugee athletes as they strive to compete either under the Olympic Refugee Flag or under a new flag after finally settling in a host country. Streaming on The Players’ Tribune YouTube Channel.

Wednesday, July 7
World Debut: This feature-length documentary that tracks the journey of what it takes to add new sports to the Olympic Games and features iconic athletes including Tony Hawk, Emily Harrington, and Sofia Mulanovich. Skateboarding, Surfing and Sport Climbing will join the Games for the first time this summer, and “World Debut” tells the story of how they got there. Streaming on the Olympics YouTube Channel.

Tuesday, July 13
Naomi Osaka: What does it feel like to be one of the best tennis players in the world? An intimate look inside the life of one of the most gifted and complex athletes of her generation offers insight into the tough decisions and ecstatic triumphs that shape Naomi Osaka as both an elite global superstar and a young woman navigating a pressure-filled world. Streaming on Netflix.

Wednesday, July 14
How To Olympics: This eight-episode series gives viewers everything they need to know about select Olympic events through easily digestible, quick-witted, and packed-with-info videos. Covering Sport Climbing, Taekwondo, Rhythmic Gymnastics, Hammer Throw, Artistic Swimming, Breaking, Badminton and Fencing, viewers will learn how each event is scored, how to win, and what it takes to master these athletic disciplines. Streaming on the Olympics YouTube Channel. 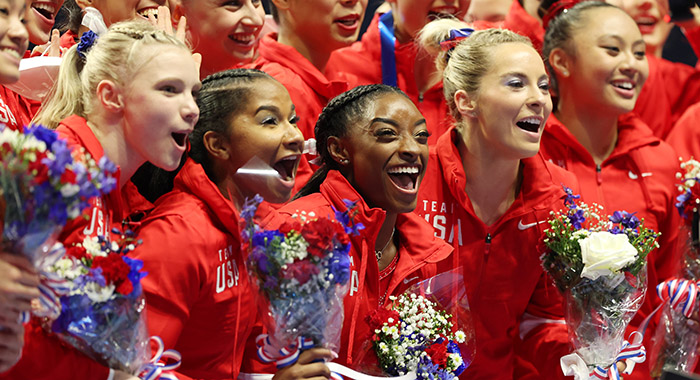 For Ball and Country — The greatest men’s basketball players in America set aside their on-court rivalries and form a star-studded team to represent their country on Team USA. In addition to an all-access look at the 2021 team’s training camp in Las Vegas, the series goes into USA Basketball video vault with never-before-seen footage of this storied program. From the iconic 1992 team to the “Redeem Team” to today, the documentary will provide a unique look into some of the greatest teams ever assembled. Streaming on Peacock.

Golden — This series follows elite American gymnasts Laurie Hernandez, Morgan Hurd, Sunisa Lee, Konnor McClain, and MyKayla Skinner on their individual and intertwining journeys as Team USA hopefuls leading up to the Tokyo Olympics. The series reveals how their preparation for the Games was fundamentally altered by the pandemic, over a five-month period as they continue their grueling training regimens. Streaming on Peacock.

The Sisters of ’96: The 1996 USA Women’s Olympic Soccer Team — When the U.S. Women’s National Team made it to the Olympic soccer in Atlanta, their gold medal match was not fully televised. Now, Peacock is making it available in full for the first time and debuting an hour-long special that reunites stars Brandi Chastain, Joy Fawcett, Julie Foudy, Kristine Lilly, Shannon MacMillan, Briana Scurry, and Tisha Venturini. For the first time, the women will come together on the field where they played that inaugural Olympic final to watch the match together and give viewers have a front-row seat as they recount their victory and the lasting legacy of their team. Streaming on Peacock.

Get a localized Olympics schedule at NBCOlympics.com.