The action sequences brought out Chalamet's inner child, and Edgerton almost died on set. They also talk about Rotten movies they love and what it's like to get bad reviews.

David Michôd and Joel Edgerton took on a bold task when they set out to adapt Shakespeare’s so-called “Henriad” into a single feature film, and they knew that in order to make the transition a successful one, they would need to enlist the services of a talented group of actors. They found exactly what they were looking for in Timothée Chalamet, Robert Pattinson, Ben Mendelsohn, Thomasin McKenzie, and Lily-Rose Depp, who helped bring the story of Henry V’s ascent to the throne to vibrant life in The King. The film premiered in September at the Venice Film Festival, and while it’s set to make its streaming debut on Netflix on November 1, it already saw a limited theatrical release on October 11, and critics have largely been on board with the new vision. Ahead of its Netflix premiere, Michôd, Edgerton, Chalamet, and Depp sat down with RT editor Jacqueline Coley to chat about The King, explaining how daunting it was to take something Shakespeare perfected and make it feel new, and how exhilarating it was for Chalamet to shoot his action sequences. They also talk about a few Rotten movies they love, and Edgerton describes what it’s like as a filmmaker to get bad reviews. 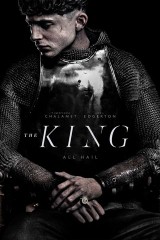