The Perfect Guy Edges Out The Visit At the Box Office

Plus, faith-based film 90 Minutes in Heaven disappoints, and No Escape and The Transporter Refueled continue to tumble. 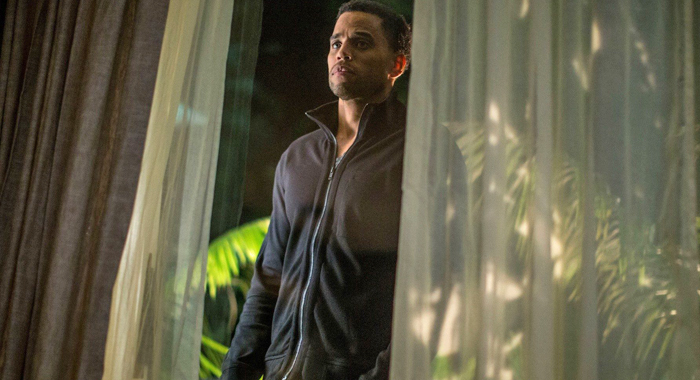 This weekend, rebounding from the worst Labor Day box office in 15 years, North American multiplexes attracted crowds again as two new low-cost thrillers opened very well targeting — and  connecting with — different audiences. It was also the first time ever that two films opened north of $25M each on the same weekend in the traditionally weak month of September.

The romantic thriller The Perfect Guy scored a muscular number one debut opening to an estimated $26.7M from 2,221 theaters for a sensational $12,022 average. With ample starpower from Sanaa Lathan, Morris Chestnut, and Michael Ealy, the PG-13 pic cost only $12M to produce and will be a nice little moneymaker for Sony. The studio used this same weekend last year for the thriller No Good Deed which bowed to $24.3M and a stellar $11,150 average targeting the same audience at the same time.

Guy‘s CinemaScore grade came in at a solid A-, although other metrics show lower satisfaction rates from consumers. As expected, women led with a very high 69% of the business and those over 25 were 58% of the crowd. Starpower and an intriguing look trumped bad reviews. A final gross north of $50M seems likely.

With The Perfect Guy, the box office has now been ruled for five straight weeks by films led by African-American casts following last week’s War Room and the runaway blockbuster Straight Outta Compton which sat at number one for three weekends.

After a string of flops, writer/director M. Night Shyamalan delivered a strong result with the opening of his new low-budget thriller The Visit which debuted close behind in second place with an estimated $25.7M exceeding industry expectations. It was the biggest horror opening of 2015 and with a budget of only $5M, the PG-13 chiller is on firm financial footing. The Universal release averaged a stellar $8,370 from 3,069 locations. The Blumhouse name certainly helped too.

Young women and ethnic audiences contributed greatly to the success for The Visit which is often the case for suspense thrillers. Females made up 60% of the crowd, 48% were under 21, and 61% were non-white. Often the target of critics, Shyamalan saw generally good reviews this time and audiences were satisfied too. The B- CinemaScore grade was better than what scary films typically get.

The faith-based hit War Room dropped from first to third with an estimated $7.4M, off just 22%. Sony has banked $39.2M to date. Broad Green slipped 44% with the second weekend of A Walk in the Woods which grossed an estimated $4.6M for $19.9M thus far.

Tom Cruise’s Mission: Impossible – Rogue Nation fell 43% to an estimated $4.2M lifting the impressive cume to $188.2M for Paramount. The spy flick stands as the only summer movie to spend seven weeks in the top five. For the entire year, Furious 7 is the only other one to do it. MI5 also enjoyed a monster debut in China with a colossal $86M across six days, lifting the global tally to $613M on its way to smashing $700M soon.

Late summer smash Straight Outta Compton dropped 53% to an estimated $4.1M in its fifth round and has collected a sturdy $155.7M for Universal. Falling 47% to an estimated $2.9M was No Escape, which has taken in just $24.2M for The Weinstein Co. EuropaCorp’s action film The Transporter Refueled fell apart in its second weekend, to nobody’s surprise. Tumbling 63% in its sophomore frame, the non-Statham flick grossed an estimated $2.7M for a weak $13.3M to date.

Opening in ninth place was the new faith-based drama 90 Minutes in Heaven which debuted to an estimated $2.2M from 878 locations for a lackluster $2,461 average. Based on a best-selling book, the PG-13 pic stars Hayden Christensen and Kate Bosworth and did not connect with its target audience the way many others from recent years have. The Spanish-language toon Un Gallo con Muchos Huevos expanded screens but still fell by 45% to an estimated $1.9M in its second weekend. Lionsgate has taken in $6.7M.