The Freshest movie and TV trailers from Super Bowl 2019, including Avengers: Endgame, Us, Hobbs and Shaw, and more.

The big game always means big trailers, and this year was no exception with fresh looks at Avengers: Endgame, Captain Marvel, Toy Story 4, Us, CBS All Access’s reboot of The Twilight Zone, Netflix’s nature documentary series Our Planet, and our first look at season 3 of Hulu’s The Handmaid’s Tale. (That’s Plus, CBS Films dropped four mini teasers for the Guillermo del Toro-produced horror flick, Scary Stories to Tell In the Dark. Catch up with all of the trailers below.

“Some people move on, but not us.” Our second look at Endgame doesn’t reveal very many new details, other than showing us a deserted New York (empty Citi Field!) and various shots of the Avengers preparing to go to battle of some kind, but the tone is far less somber than the first trailer. No moping here: the team is preparing for action. (Eagle-eyed watchers will note that the trailer pays tribute to the fallen at the very beginning.)

The just-released Toy Story 4 spot gave us some insight into Ducky and Bunny (voiced by Keegan-Michael Key and Jordan Peele) who terrorize/annoy Buzz as they share wall space at a country fair carnival game. “To infinity and… my foot!”

Trailer for Our Planet 93%

Nature doc lovers, rejoice! Netflix just dropped a 30-second trailer for its natural history series, Our Planet, which comes from the creators of Planet Earth, working with the World Wildlife Fund, and is narrated – of course – by Sir David Attenborough. It’s a mammoth project: shot over four years in 50 countries, the series featured 600 crew members who shot for more than 3,500 days in total.

Our Planet is available to stream on Netflix from April 5.

Trailer for The Twilight Zone 67%

Following a very short look at the new Spock on Star Trek: Discovery, CBS faked a failed transmission and then transported us to The Twilight Zone. Or at least to an empty stadium where Zone reboot producer and narrator Jordan Peele asked, “What dimension are you even in?”

The Twilight Zone debuts on CBS All Access April 1, 2019.

Marvel Studios’ latest spot for Captain Marvel didn’t reveal too much we hadn’t already seen, but it’s all-action vibe was a different approach than what we’ve seen from the marketing so far. Leaning into the film’s tagline – “Higher, further, faster” – this punchy spot was all ass-kicking and attitude.

Our first look at season 3 of Hulu’s The Handmaid’s Tale is a chilling parody of Reagan’s “Morning in America” campaign commercials that ends with an incredible image: hundreds of handmaids standing in formation at the Lincoln Memorial Reflecting Pool.

Season 3 of The Handmaid’s Tale is coming soon to Hulu.

The James Cameron-produced, Robert Rodriguez-directed Alita: Battle Angel released a new TV spot during the Super Bowl pre-show, with the focus squarely on Mahershala Ali’s villain and messaging pushing the film as a must-see 3-D event. That falls in line with what early reviews have been saying: while the film lacks a little something in the script department, critics are almost unanimous that the movie provides plenty of big-screen spectacle.

Horror mastermind Guillermo del Toro produces this CBS Film’s thriller from director André Øvredal (Trollhunter), which sees a group of teenagers trying to solve the mystery behind a series of deaths in their small town. The first two mini teasers are light on detail, but big on creepiness, with the first featuring a chilling “we’re next” and a jump-scare reveal of the kind of monster only Del Toro could conjure, and the second showing that hiding under your bed isn’t going to save you. One more mini teaser is expected to drop throughout the Super Bowl broadcast.

The third and shortest teaser shows mysterious trouble in a red-lit hallway. If you want a clearer look at the “Pale Lady” at the end of the hallway, CBS Films has supplied.

The team behind Scary Stories to Tell In the Dark saved the grossest vignette until last, with their mini teaser revealed in the fourth quarter giving horror fans a “mirror scare” for the ages.

Our second look at Jordan Peele’s Get Out follow-up, Us, is just as freaky as the first. The film – which sees a family attacked by a group of doppelgängers while on vacation – is set to open the South By Southwest Film Festival in March.

An all-star voice cast headlines this American-Spanish animation co-production, with Jennifer Garner, Kate Hudson, Matthew Broderick, Kenan Thompson, John Oliver, and Mila Kunis all on board. The film tells the tale of a young girl who discovers that the amusement park she imagined as a young girl is actually real – and under threat. The just-released Super Bowl trailer promises plenty of sassy animals and rollercoaster-style action.

Remember when the Fast and the Furious franchise was all about relatively modest muscle cars and the “family” that raced them? This new trailer – which we expect to be shown during the game (perhaps in a shorter form) – shows just how far the Furious team has come, with a spinoff that features Idris Elba as a cyber-genetically enhanced villain and Dwayne Johnson and Jason Statham racing each other down the face of a building with ropes and an elevator, respectively, as you do.

Game watchers got another look at the Amazon Prime Video adaptation of Joe Wright’s film, Hanna, the first episode of which is available for 24 hours following the game – but will disappear after that until the series launches in March.

The pilot Hanna debuts on Amazon Prime Video after the game and is available for 24 hours.

This latest entry in the American Ninja Warrior-style average-people-doing-extraordinary-things genre comes to us via executive producer LeBron James.

Prepare to watch world-class athletes go up against some of the most inspiring people in the world. The chase begins March 27 at 9/8c. #MillionDollarMile pic.twitter.com/9OCTG2p15o 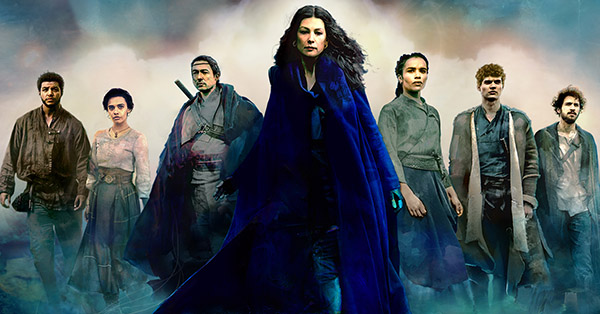