15 years after its release, we look back at a unique superhero movie that showed us what teenage life in a superpowered world would look like. 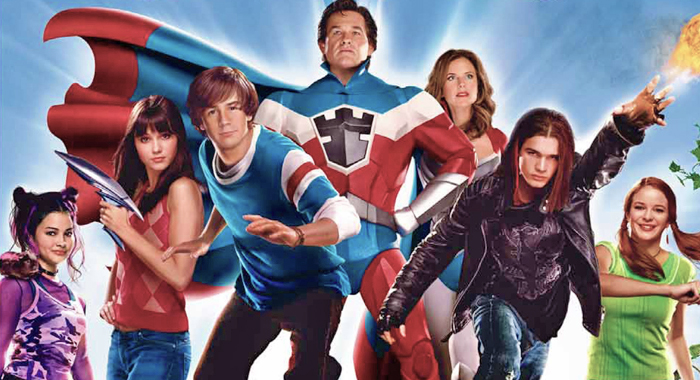 Comic book movies have given us plenty of fun and interesting worlds to visit — the Marvel Cinematic Universe keeps expanding, from the streets of Queens to the vastness of outer space, and the DC Universe has brought to life famed locations like Gotham City and Themyscira — but few of those worlds have portrayed what life would look like if the presence of superpowered beings were normalized. One of the first glimpses we got was in 2000’s James Gunn-penned The Specials, which was really more of a “dysfunctional family” comedy that just happened to take place in a world populated by superheroes.

But in 2005, Disney released a playful, unassuming little movie called Sky High, which addressed not only what a world filled with superheroes would actually look like, but specifically how it might feel for its extra-gifted teenagers. Despite a much lower budget than your average blockbuster, Sky High delivers a lot of heroic action and plenty of nods to the Silver Age of comic books, all wrapped in an intimate story that still manages to have high stakes. For its 15th anniversary, we’re taking the “Hero or Sidekick” test to tell everyone why Sky High is one of the most inventive and overlooked superhero films of its time.

ITS WORLD IS FULLY FLESHED OUT FROM THE BEGINNING 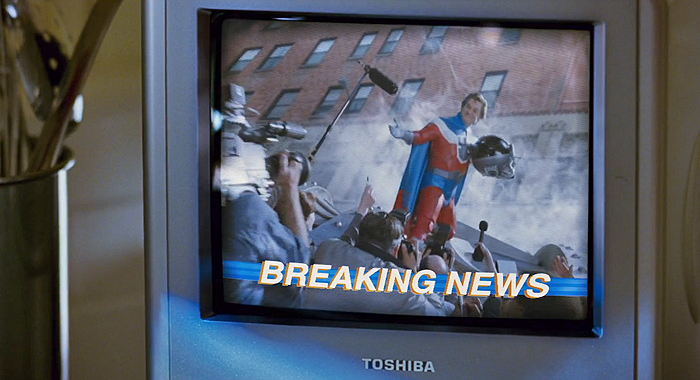 What would the world look like if superheroes were commonplace? Prior to 2005, we rarely saw depictions of “normal” life for superheroes — The Specials and, to a lesser extent, Mystery Men and The Incredibles are notable examples — but Sky High hints at a larger world early on. Spoken by the story’s hero, Michael Angarano’s Will Stronghold, the first line of the film literally begins with “In a world full of superheroes…” and runs with that concept, showing what it might look like if nearly everyone (or at least a big chunk of the population) had superpowers. The film introduces the idea that the children of superhuman folks inherit at least one of their parent’s powers, so not only is legacy a big theme in the film, but there are hints at a long history of superhero lineages stretching back across decades.

Of course, if you’ve got superpowered children, it only makes sense to have a school for young would-be heroes; the Sky High campus rather appropriately floats in the clouds, and the only way to reach it is a flying bus. All the courses are related to superheroes and dedicated to teaching how to control one’s powers. Imagine Hogwarts, but instead of Quidditch, kids play “Save the Citizen,” where teams of heroes and villains battle to save a mannequin from a deadly trap — or destroy it. The bullies are naturally super fast or super strong, and the caste system is divided between those who the teachers deem “heroes” and those they deem “sidekicks.”

Nowadays, it’s common for superhero movies to riff on different genres like rom-coms, heist flicks, and road trip movies, but Sky High utilizes the teen comedy setting to demonstrate how to depict a fully fleshed-out world without the benefit of a blockbuster budget or a connected cinematic universe. 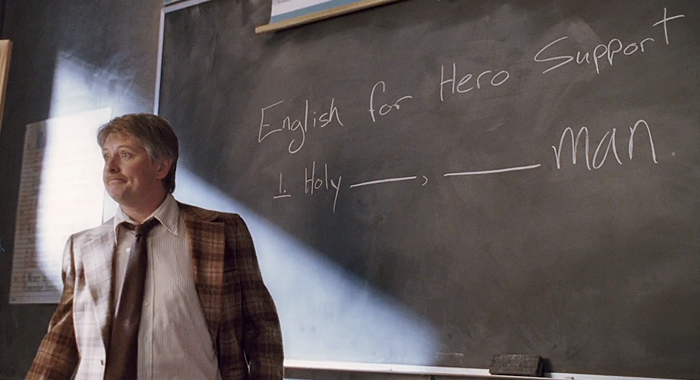 Years before Deadpool made fun of superhero clichés and elaborate plots, Sky High found the right balance of spoof and homage, fully embracing the inherently absurd nature of a world populated by superpowered beings who dress up in ridiculous costumes. The film is a self-aware comedy through and through, featuring a ton of references to comic book tropes, and it trusts its audience enough not the spoil the fun with unnecessary explanations, the way that something like Glass does.

Superhero movies as we know them really began to take over the mainstream during the early 2000s, but for a good portion of the general moviegoing audience, the genre began and ended with Spider-Man, Superman, and particularly Batman, who had just been successfully rebooted in Christopher Nolan’s Batman Begins a month before Sky High was released. Naturally, Sky High has plenty of references to that Silver Age classic character, like the Batcave-esque Secret Sanctum of Kurt Russell’s Commander and Kelly Preston’s Jetstream, only accessible via fireman’s pole. At school, Dave Foley’s teacher (and former sidekick) Mr. Boy teaches an “English for Hero Support” class that focuses on different iterations of Robin’s famous catchphrase, “Holy ____, ____Man!” It’s all cheeky stuff, but it reflects an admiration for the campy superhero stories that inspired the film.

IT ANTICIPATES THE PITFALLS OF SUPERHERO FAME 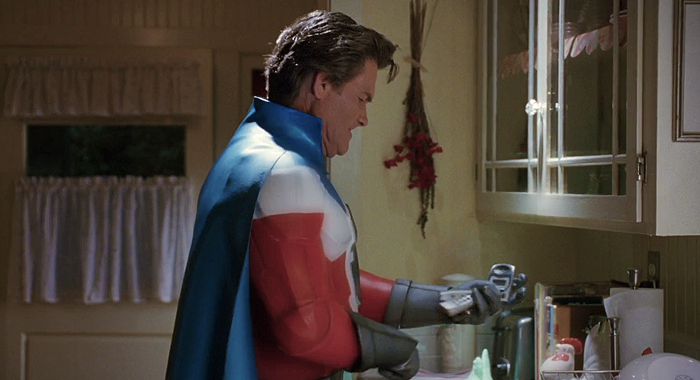 In the film’s DVD extras, director Mike Mitchell said that he wanted the adults in Sky High to be “all insane” in order to focus on the teenagers figuring things out and saving the day themselves. This inadvertently makes Sky High feel ahead of its time, as it anticipates a wave of superhero stories taking a cynical look at the genre.

The past several years have seen a reexamination of the role of superheroes in modern society in various films and TV series, ranging from Captain America: Civil War and Batman v Superman: Dawn of Justice to The Boys and Watchmen. These projects explore the idea of superheroes as virtual deities who are perhaps out of touch with the common world they supposedly fight to protect and oblivious to the danger they pose to it.

In Sky High, a life of being worshipped as a hero has made The Commander so detached and egocentric that he can’t even remember the name of the sidekick who once saved his life. He’s so dismissive of sidekicks, in fact, that when Will confesses that he’s been placed in the sidekick curriculum, The Commander destroys a phone in a fit of anger and opens up a kitchen drawer to reveal a half dozen more of them, indicating this isn’t an isolated incident. At school, Bruce Campbell’s gym teacher Coach Boomer is something of a verbal abuser who encourages the “heroes” to bully and ostracize their presumably lesser classmates, despite acknowledging that sidekicks have become villains in the past. It’s all played for laughs, of course, but it hints at the sort of abuse of power that has become the central conflict for so many of today’s superhero stories.

ITS ACTION IS GROUNDED IN CHARACTER MOMENTS 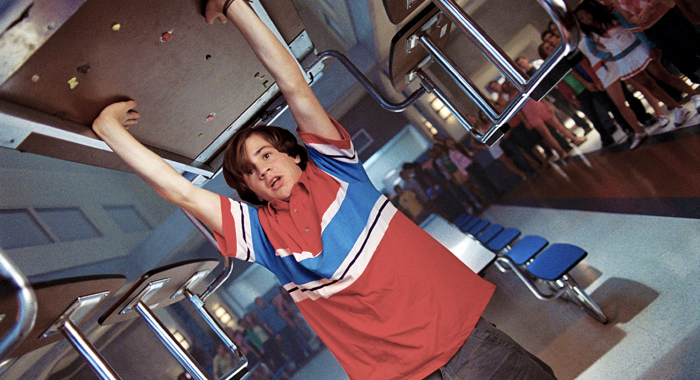 By nature, superhero movies usually feature a few big action set pieces and massive fights. Sure, it’s exciting to see the heroes use their powers in a battle, but Sky High takes a different and more intimate approach. Take, for example, the first time Will fights his apparent nemesis, school outcast Warren Peace (Steven Strait), or the “Save the Citizen” sequence. These scenes focus on emotional development rather than spectacle; the former sees Will realize and use his powers for the first time, while the latter illustrates how Will’s confidence begins to warp his self image. Even the film’s climactic battle uses action to highlight the theme of acceptance and overcoming social and familial expectations to find yourself and your tribe. They’re fun scenes in and of themselves, but they also serve to illustrate deeper ideas at the core of the film, and that’s arguably more meaningful than watching the good guys beat up on another generic horde of nameless baddies.

In the 15 years since the release of Sky High, the superhero genre has ebbed and flowed between gritty realism and popcorn fantasy, but few films have dealt with the ins and outs of superpowered life quite as playfully. It wasn’t the first superhero film to treat its subject matter with a healthy dose of cheeky meta humor, but it offered a unique perspective on some familiar themes that would find an echo in the later X-Men films, Shazam!, Spider-Man: Into the Spider-Verse, The Umbrella Academy, and even the popular Japanese manga/anime series My Hero Academia, which shares a lot of the same DNA. Turns out, being a teenager is never easy, even when you’re blessed with extraordinary powers. 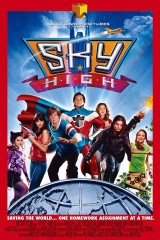