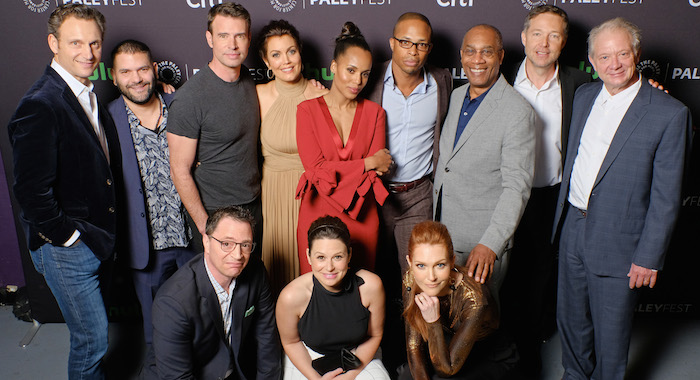 Fans hoping to find out early if Huck (Guillermo Diaz) survived the shooting on last week’s Scandal will still have to wait until Thursday, because Diaz was on a PaleyFest panel with his costars this weekend and he wouldn’t spill any details about his character’s future.

All the actor would admit is that he really appreciates your support and yes, he reads all your tweets.

But the Scandal cast did let a few small details about upcoming episodes slip. For an hour, the gladiators in suits celebrated the #Scandalfamily and teased what’s coming up in episode 100 and beyond. Kerry Washington, Bellamy Young, Tony Goldwyn, Darby Stanchfield, Joshua Malina, Jeff Perry, Scott Foley, Joe Morton, Katie Lowes, George Newbern, Cornelius Smith Jr., and Diaz were part of the panel, and here are five hints they shared about upcoming Scandal episodes and two more fun behind-the-scenes stories.

1. THE 100TH EPISODE FANTASY HAS HINTS ABOUT THE REAL 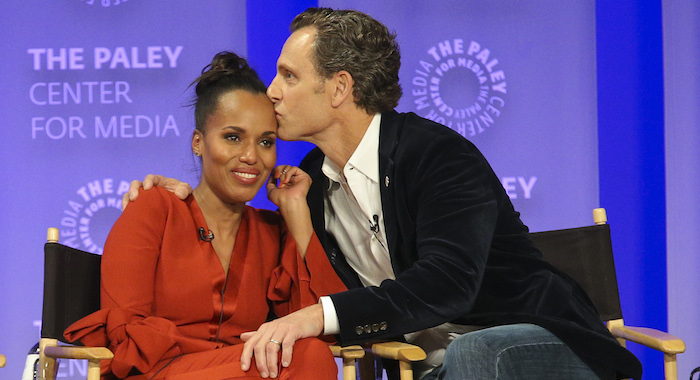 April 13th marks the 100th episode of Scandal, and the episode will present a Sliding Doors take on where the characters would be if Olivia (Washington) hadn’t rigged the election back in season 2. It’s more than just a “what if?” question, says Goldwyn, who described the episode as “insane.”

“It’s not just a standalone,” Goldwyn said. “It actually informs your understanding of all of us when we get back to our normal Scandal reality.”

Lowes suggested that fans might see the original gladiators in suits again. “It’s really the OG gladiator inside track,” Lowes said. “It’s such a gift what the writers gave to us and to the fans.”

Taking a break from the present storyline also kickstarts the rest of the season, Stanchfield said.

“Also where it’s placed, to us as a group, it’s kind of oxygen to this fire,” Stanchfield said. “You laugh because you need to. The audience will feel that too of this respite 100th episode.” 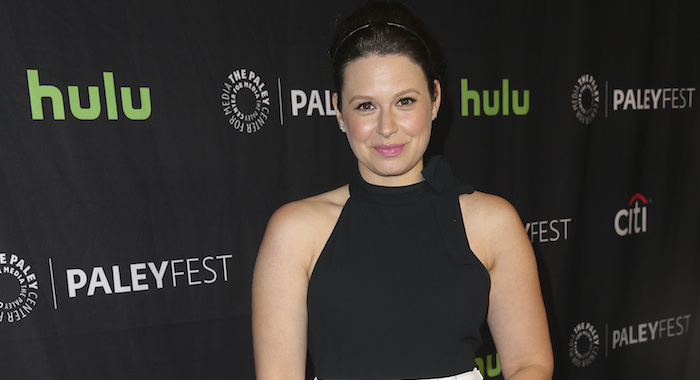 Washington and Lowes whet the fans’ appetite for a big Quinn (Lowes) moment coming up. Lowes said that something she gets to do is one of her most memorable moments of the series.

“There’s one coming that I can’t tell you,” Lowes said. “It is sweet bucket list stuff for me.”

Washington couldn’t contain her joy for Lowes. “So good,” Washington exclaimed, waving her hands and stomping her feet for the moment to come. 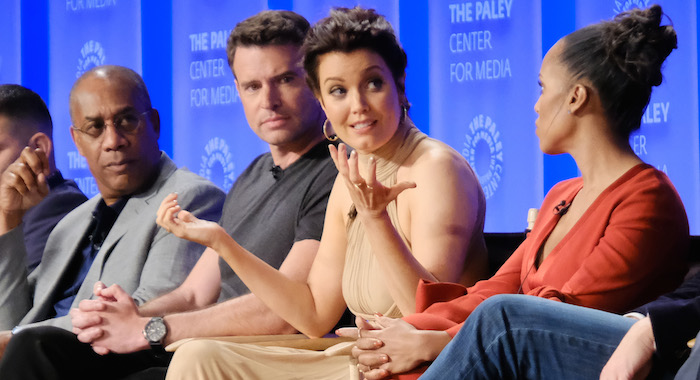 “It hurts,” Young said. “I can taste it. I hope it happens. Nothing would make me happier but Shonda can just wring you dry like a sponge.” 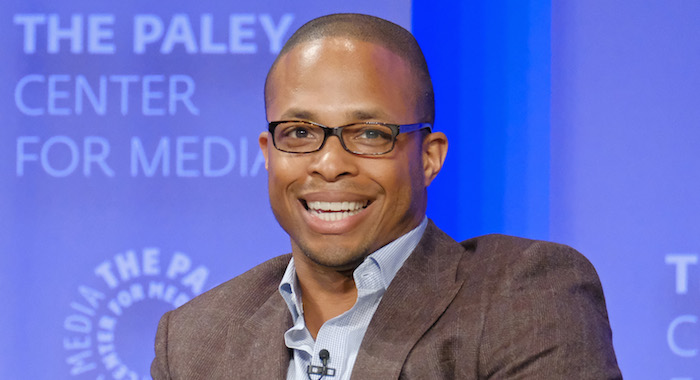 After an election night kiss, Scandal has been teasing a Marcus (Smith) and Mellie relationship. Smith said upcoming episodes will ramp up the flirtation between the two characters.

“I think in the next coming episodes we’ll just get more looks and crumbs to the beautiful pie that could be or could not be Mellie and Marcus,” Smith said. “I’m always a fan for a happy ending and I believe in love. So we’ll see.”

5. CYRUS COULD GO EITHER WAY

Cyrus (Perry) thought all his politicking might have gone too far when he was framed for the murder of Frankie Vargas (Ricardo Chavira) — and thought his boyfriend Tom (Brian Letscher) actually did it. The relief of learning neither he nor Tom were involved could make Cyrus a softer man, or make him double down on his ruthless side.

“[Cyrus] was really scared,” Perry said. “I created a monster of Tom and I think he did this. I’m scared he did it. Please tell me he didn’t and I believe he didn’t. The inner Cyrus, as opposed to the strategic bastard Cyrus, is really grateful he can look Luna Vargas and their child in the eye and say, ‘I loved your dad and I didn’t do this.’

“Is he going to double down and be revenge strategic bastard Cyrus, or is he going to learn something from all this?” Perry added. “I don’t know.”

6. HOW THEY KEPT THE BAHAMAS SHOOT A SECRET 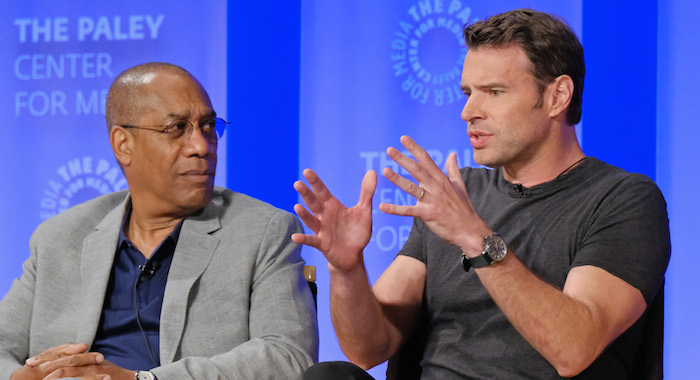 ABC wanted Olivia and Jake’s (Foley) trip to the Bahamas kept secret from audiences. But how do you keep the stars of one of TV’s biggest series hidden on a tropical island?

“They were nervous people would see us traveling on a plane,” Washington said. “[ABC parent company] Disney as a company gave us the Disney plane so we could secretly fly to the Bahamas.”

Foley said the Disney jet isn’t as impressive as it sounds. “It’s very small,” he teased.

7. LIVE TWEETING HELPS THE CAST TOO 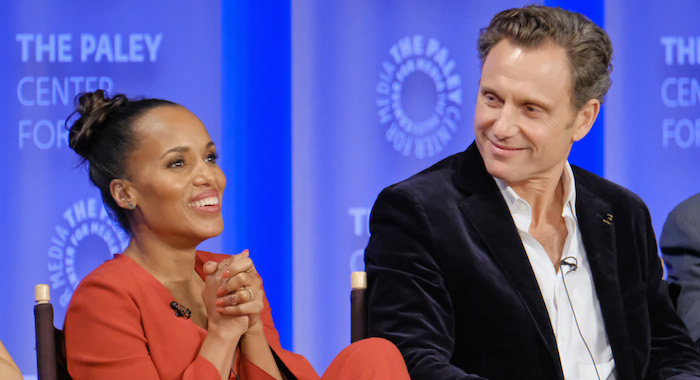 Scandal cast members live tweet every Thursday night for both coasts. Sometimes the cast is following along on Twitter just to see if the episode ended up differently than they read or filmed it.

“Sometimes it changes a lot,” Young said. “Sometimes we see it on air. Sometimes when we’re tweeting blind at six o’clock [west coast time], we don’t know if somebody lived or died.”

When a script ends in a cliffhanger, the cast tries to interrogate Rhimes. In many cases, she has not even decided the outcome herself. “She’s like, ‘Don’t ask me, I don’t know.’” Young continued. “You just live in the wonder till you sit back down for the next table read.”

Often when you’re tweeting at Scandal stars, you’re reaching them live on the set during both East and West Coast airings.

“I feel bad for our directors,” Washington said. “If you direct us on a Thursday, between 6 and 7 for East Coast and then 9 and 10 for West Coast, we barely pay attention to anybody. They say ‘action’ and we act, then we go back to our phones.”