The director and writer tell RT about the journey to screen for the biopic.

Gus Van Sant and Dustin Lance Black look rather exhausted at this stage in their publicity whirlwind for Milk. The day RT sits down with them, the film has just received four BAFTA nominations, including one for Lance’s original script. The jetlag seems to be getting to them, but they perk up when they start talking about Harvey Milk and their very different journeys into this project.

Milk is an interesting companion piece to Rob Epstein‘s Oscar-winning documentary The Times of Harvey Milk, which is credited as a key reference.

Dustin Lance Black: It was an inspiration because of a speech that’s in it, and I heard that when I was in college. I’m from San Antonio, Texas, and Harvey says, “There’s a kid out there in San Antonio who’s going to hear my story and it’s going to give him hope.” And it’s true – it really did do that. I’d heard of Harvey about six years before that, from a theatre director who told me his story, and it was a revelation to me that there was such a thing as an out gay man, much less one who was elected to public office and celebrated. You don’t have that in Texas!

But it’s tough to do a comparison between the films. The thing I wanted to do in the script was get much more personal. The documentary doesn’t have most of the stories that I was drawn to. It doesn’t have Cleve Jones’ story, which is a father-son story, which I related to the most. And it doesn’t have Scott Smith and Harvey’s story. It doesn’t have Jack Lira. It doesn’t have any of the actual love stories. But it has the political framework, which is great. And the most transformative time in Harvey’s life was that political time, so obviously both Rob Epstein and I were drawn to that. I just thought it was an opportunity to get more into the personal stories – of what it was to be gay in that transformative time. In narrative I can take liberties and create that; in documentary maybe there wasn’t the material there to dive into those stories. To me it felt like there was more to be told.

How did you get in contact with the people from Harvey’s life?

DLB: It was a challenge. It was unfinanced, and there was no movie or book to base it on, because I didn’t have the rights to anything. But also it was a great opportunity, because I was forced to make those drives to San Francisco to meet all the real people. It started with Cleve Jones in 2004, because a friend introduced me to him and he started telling me the stories. He’s very candid, so he didn’t tell me the stories that would lionise Harvey or make him into a saint, but stories of a failed businessman who really messed up his relationships. And that humanised him in the kind of way that said to me, “Hey you can make a movie out of this!” Because if it’s just pure hagiography, who cares? You want to know that a real human being who’s kind of like you could achieve these things.

Next were Danny Nicoletta and Anne Kronenberg – meeting all of his allies – and then I moved on to meeting his political foes. It was difficult at first because these people had been told that a movie was going to be made for two decades, but it never happened. They’ve been sharing these stories, but they aren’t easy stories. It’s entertaining, beautiful and moving for us, but for them it’s incredibly painful. So once that dam broke and they did trust me enough to share, then a lot of people came out of the woodwork. I was just trying to build a history and get a sense of a man who I could never meet – and you can get that by talking to the people who he shaped, because they were so young back then.

Gus, you’ve been living with this project for quite a lot longer.

Gus van Sant: Well, I was involved in the other project, which was in 1992. Oliver Stone had attached himself to a project that producers Neil Meron and Craig Zaden had begun with Randy Shilts’ book The Mayor of Castro Street. It’s a pretty grand book – it’s a grand story and there’s a cast of lots of characters, with tens of thousands of people marching in the streets. It’s the birth of the “out” part of gay history, and at the centre is Harvey becoming a more out person, and his rallying cry to come out. And then Oliver joined on and it was like the jackpot: Oliver Stone, major Academy Award-winning films from Platoon to Wall Street. JFK was about to come out, and he was developing this script – it was edgy and hard-hitting and it was backed by $40 million from Warner Bros. And Robin Williams was going to play the role.

Then when JFK came out, Oliver decided he wasn’t going to do it. I don’t know what his other projects were – he might have had 10 other things in development at Ixtlan, his production company. So the studio was in an awkward place because they’d had one of the biggest guys. They did go to Ron Howard, because he told me, and Coppola, Spielberg – well, I would have if I was them. Then one day I was meeting with Rob Epstein socially – we’d met on the festival circuit in ’84 – and he told me Oliver had just dropped out of the film. I didn’t know there was a film – I didn’t even know there was a book! I’d seen Rob’s film about Harvey, and he was saying, “Oliver dropped out and they’re looking for a director – you should do it!” And when I told Warner Bros I might be interested in being considered, I was all of a sudden pushed in. 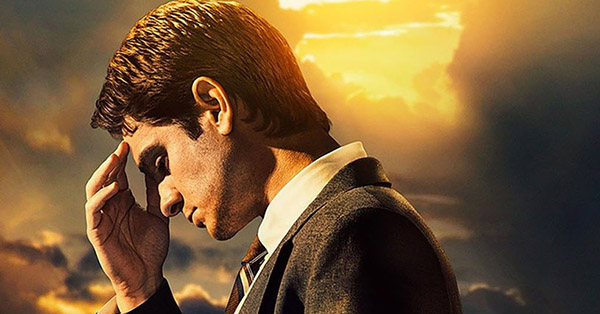 Under the Banner of Heaven Showrunner Dustin Lance Black: Representation Is ‘Life and Death Critical’