'Tis the Season for 10 Film- and TV-Tied Video Games

From The Walking Dead to a dancing bull, these new video games will keep fans immersed in their favorite fictional worlds long after the credits roll. 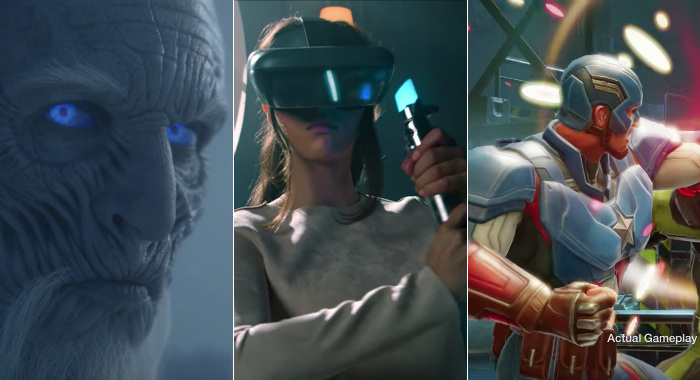 With 2017 soon coming to a close, many TV series are going on hiatus, while the big holiday blockbusters are giving way to winter’s slimmer cinematic pickings. Thankfully, a number of new and upcoming video games are inviting fans to continue living — and playing — in their favorite fictional worlds.

Whether you dig small-screen serials like Stranger Things, Game of Thrones, and X-Files or prefer silver-screen spectacles such as Star Wars, Planet of the Apes, and any film starring a spandex-clad superhero, there’s an interactive experience just begging to beam you back into your favorite universe.

Stranger Things has been renewed for a third season, but we’d rather spend a night in the Upside Down than wait a full year for fresh episodes to drop. Thankfully, we can visit our favorite fictional Midwestern town any time in this charming adventure game based on the Netflix hit. Sporting an appealing retro presentation, which nicely complements the series’ mid-’80s vibe, Stranger Things: The Game features fan-favorite characters, familiar Hawkins locations, and enough nods to the show to stretch a smile across Hopper’s miserable mug.

With just a single season left, HBO’s Game of Thrones is about to see winter come…and go. Fans needn’t be left in the cold though, as this strategy-focused mobile game encourages them to continue living out their Seven Kingdoms–conquering fantasies on their tablets and smartphones. With a few taps, swipes, and plenty of smarts, players can claim a house, build an army, and, with a little luck, ultimately place their butts on that coveted Iron Throne.

Fans of Coco can’t yet play a game based on Pixar‘s popular new film, but Rush: A Disney-Pixar Adventure may be the next best thing. Originally released for the Xbox 360’s ill-fated, hands-free Kinect peripheral, Rush — featuring challenges based on Toy Story, Cars, Up, The Incredibles, and Ratatouille — failed to find an audience its first time out. Re-released with improved controls, enhanced visuals, and brand-new Finding Dory content, however, this family-friendly offering deserves a second shot.

Much like the fall movie Murder on the Orient Express — minus Kenneth Branagh’s epic facial hair — this story-driven, interactive adventure presents players with a central murder mystery and a quirky cast of possible suspects. Rather than simply watching the case-cracking events unfold, however, armchair detectives can decipher codes, solve puzzles, gather clues, and interrogate potential perpetrators. As investigative reporter Heidi Price, players also collect and piece together these various strands of evidence while exploring 17 unique locations spread throughout the titular locomotive.

While Star Wars Battlefront II is generating all kinds of buzz, it’s not the only recent game attempting to immerse players in the popular sci-fi saga. Star Wars: Jedi Challenges uses the power of the Force — er, augmented reality — to put fans behind a lightsaber replica before unleashing them on Sith foes. While not your traditional controller-clutching experience, Jedi Challenges — with its included AR headset, tracking beacon, and elegant Jedi weapon — puts fans in a galaxy far, far away like no game before it.

PLANET OF THE APES: LAST FRONTIER

Unfolding between the events of Dawn of Planet of the Apes and War for Planet of the Apes, this narrative adventure game puts fans behind both the surviving humans and their primate adversaries. As a new cast of characters on both sides of the conflict, players can decide the fate of the two camps through story-driven, choice-and-consequence gameplay. With the recent Apes trilogy coming to a close, Last Frontier looks to extend fans’ stay in this compelling fictional universe.

The familiar match-three mobile puzzle game formula gets a fresh spin courtesy of Ferdinand, the titular dancing bull from the John Cena–starring animated film. Sporting a pop-off-the-screen presentation and a focus on music and dance, Ferdinand: Unstoppabull packs hundreds of levels featuring the film’s quirky cast of anthropomorphs, including a trio of scene-stealing hedgehogs. If you can get past the title’s terrible pun, this one might provide your next puzzle-game addiction.

If you’ve already survived this interactive, narrative-focused take on Robert Kirkman’s flesh-eating franchise, you’re aware its writing often rivals — and frequently surpasses — that of the TV show. If you’re yet to experience this goosebumps-raising romp, however, you can now consume all 19 episodes of its character-driven, choice-and-consequence gameplay in one content-packed collection. On top of all three seasons, plus the 400 Days– and Michonne-focused spin-offs, this comprehensive offering features a fresh coat of visual polish.

Even moreso than the ever-elusive truth, 2016’s X-Files revival proved rabid fans of the paranormal series are still out there. With that in mind, 20th Century Fox’s interactive entertainment arm is extending the universe with Deep State, a title taking place between the show’s 9th and 10th seasons. As a new FBI agent, players will collect clues, crack puzzles, and interact with unsavory characters. In addition to ongoing, updated content — of both the mythology and monster-of-the-week variety — Deep State will feature appearances from fan-favorite characters.

If repeatedly watching the Avengers: Infinity War trailer isn’t curbing your Marvel craving, you may want to supplement your superhero fix with Strike Force. Due to hit like a pavement-buckling Hulk Smash in 2018, the new mobile game mixes up Marvel’s iconic cast of spandex-clad day-savers and evildoers in unprecedented alliances. Combining strategic combat with character-progressing role-playing game elements, Strike Force promises to offer something for superhero fans of all stripes.