21 Most Memorable Movie Moments: The Chest-Waxing Scene from The 40-Year-Old Virgin (2005)

It was real pain, real screams, and real blood all in real-time: Judd Apatow breaks down one of modern comedy's most cringe-inducing scenes.

Watch: Judd Apatow on the making of The 40-Year-Old Virgin above.

In 2019, Rotten Tomatoes turns 21, and to mark the occasion we’re celebrating the 21 Most Memorable Moments from the movies over the last 21 years. In this special video series, we speak to the actors and filmmakers who made those moments happen, revealing behind-the-scenes details of how they came to be and diving deep into why they’ve stuck with us for so long. Once we’ve announced all 21, it will be up to you, the fans, to vote for which is the most memorable moment of all. In this episode of our ‘21 Most Memorable Moments’ series, director and co-writer Judd Apatow takes us behind the scenes of the infamous (and real-life!) chest-waxing scene from The 40-Year-Old Virgin.

It’s hard to believe that Judd Apatow’s The 40-Year-Old Virgin is just 14 years old – it feels like we’ve been living in the Apatow comedy era for so much longer than that. Back then, Steve Carell – whose series The Office had just debuted and had yet to take on cult status – was not quite a household name, and Apatow himself hadn’t become his own brand of comedy. (Say “Apatow production” today and moviegoers know exactly the kind of smart, sweet, and raunchy ride they’re in for – and who’s likely to be appearing in it.) In a sense, Virgin, Apatow’s feature directing debut, recalibrated comedy for the new millennium, bringing an edge to the rom-com formula, introducing us to a new kind of hero in Andy (Carell), and ushering in the faces who would come to dominate comedy for the next decade and a half (Seth Rogen, Elizabeth Banks, Paul Rudd, Jonah Hill, and Mindy Kaling all appear in parts big and small). It all got started on the set of another seminal comedy, Anchorman, which Apatow was producing and Carell was co-starring in…

“I think that the pitch he had was, ‘You know how when you touch a woman’s breast it feels like a bag of sand?’”

“I was producing Anchorman, and Steve Carell was just so insanely funny every day, improvising the craziest, most hilarious stuff ever. I walked up to him one day and I said, ‘It seems like you should be the star of a movie. Do you have any ideas?’ And then a couple of days later he walked up to me and told me a couple of ideas. And the last one was: What if I made a movie where I played a 40-year-old virgin? And he said he had worked on a sketch at Second City, where he played a 40-year-old virgin at a poker game, and everyone was talking about sex and telling dirty stories, and it became very clear that he was making his up. And I think that the pitch he had was, ‘You know how when you touch a woman’s breast it feels like a bag of sand?’ And oddly, instantly, I understood what he was talking about, and we started writing a movie together.” 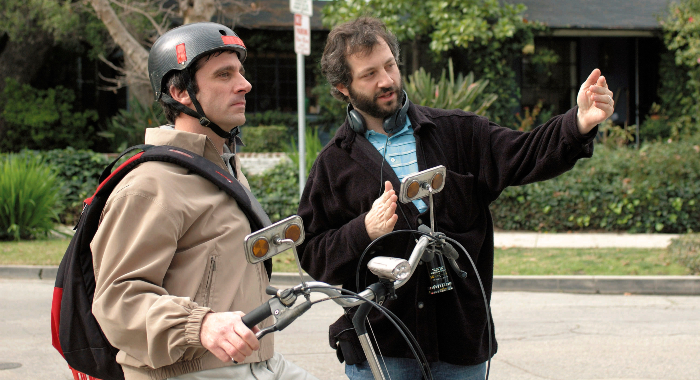 “We would always leave time to shoot the script – but then also to really play.”

“I’ve always been a big fan of improvisation ever since I saw Ben Stiller do it when we did the Ben Stiller Show. I definitely encouraged it when Adam McKay was directing Anchorman. With The Forty-Year-Old Virgin, Steve is such a master at it that whatever scene we were doing we would always leave time to shoot the script but then also to really play. And that’s how we did the chest-waxing scene. It basically was an extended improvisation.”

The Scene: Andy Gets His Chest Waxed

One moment, one line really – “Kelly Clarkson!” – remains the most cherished among a series of wonderful moments in this landmark comedy (though the final musical number, a post-coital “Age of Aquarius,” comes close). In this unique makeover scene, Andy (Carell) gets his chest waxed, and in order to capture the moment in its visceral, wince-inducing glory, Apatow simply let his four cameras roll.

“We wanted to do some version of a makeover sequence, but we knew that had been done a ton of times. So we were trying to think of original scenes for a makeover montage. Then one day Steve said, ‘What if you waxed me but you did it for real?’ Now at the time, I thought Steve made it up and had never been waxed, but since then I realized that he had been waxed many times in his life and was pretending that he had never been waxed before. I know that by the shape of his chest hair. But at the time, I thought, wow, what a crazy idea. Who ever gets waxed? So we hired a woman who was a professional chest-waxer to do it in the movie. Someone came in and said, ‘I act and I wax!’” 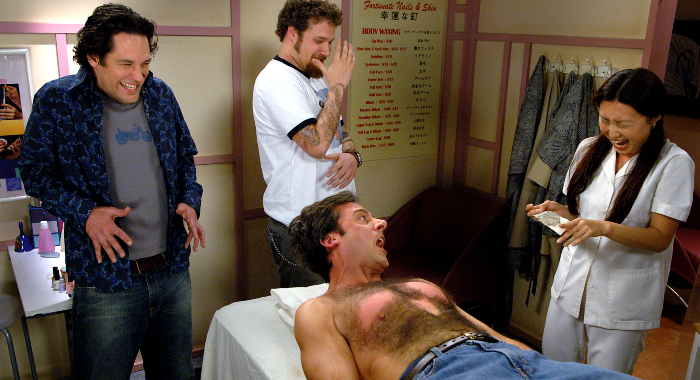 “We knew that we had to get Steve’s real reactions, so we shot it like a documentary.”

“I basically set up four cameras and we had some basic beats we wanted to hit. We knew that we had to get Steve’s real reactions, so we shot it like a documentary. We wrote out tons of curses, because we did plan the main joke to be that he would just curse right into her face. And we also made lists of words that weren’t real curses that sounded like curses. That’s how we got to Steve screaming ‘Kelly Clarkson!’ Off to the side, Seth Rogen had made this enormous list of curses, and I would just yell them out to Steve, and each time they ripped the hair off of something he would scream out one of the curses.”

“You’re supposed to put Vaseline over the nipples, so you don’t accidentally rip them off. Apparently that was a step she forgot about.”

“The woman who waxed Steve – she may not have been that good at it. I think you’re supposed to put Vaseline over the nipples, so you don’t accidentally rip them off. And apparently that was a step she forgot about. He was definitely bleeding for real. In fact, we had to CGI out the fact that there was a lot more blood than you see in the movie.” 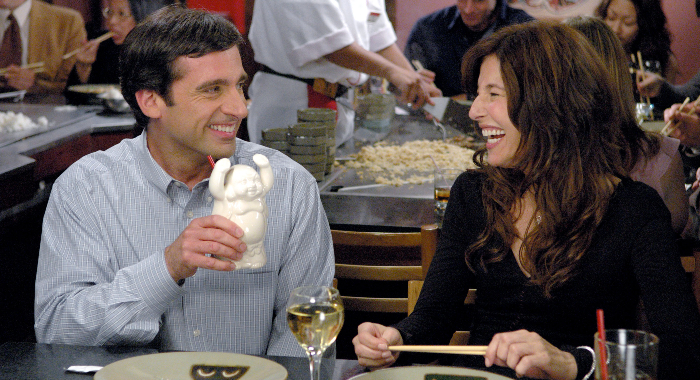 “I don’t think I’ve ever laughed harder than at Jackass movies.”

“It is of the Jackass mode of comedy. I don’t remember if it came out before or after the craze of pranks and painful violent stunts, things like that. But people always love that. I don’t think there’s anything funnier than Jackass. I don’t think I’ve ever laughed harder than at Jackass movies. And I also think it works the same way a horror movie works, which is: you think something’s gonna happen, then it finally does, but not at the moment you think it will – and it makes you scream and hide your face. It has a little horror to it as well.”

THE IMPACT: A New Kind of Comedy

Virgin was a box office success – it’s currently the 16th highest-earning R-rated comedy of all time – but more than that, it reshaped our idea of movie comedies, particularly those with a romantic bent. Gross-out laughs could be followed by moments of genuine sweetness. Romantic leads could be dorkish, a little schlubby, and, at least for much of the film – very hairy. Silliness could be whip-smart. As long as it was all grounded in reality. Apatow would go on to direct landmark comedies like Knocked Up and Trainwreck, and produce the likes of Bridesmaids and HBO’s Girls, all of which bear some of the markings of what made Virgin such a smash: characters you love and moments you will never forget, because they make you cringe, gag, and leave the room, but also make you swoon and cry.

“I’m sure it seemed very self-involved. But it was why the movie worked.”

“A lot of our crew didn’t get what we were doing. That was at a time when there weren’t a lot of movies that were shot the way we were, with all of this improvisation, and a lot of the crew just seemed annoyed we were doing so many takes. We had a lot of Clint Eastwood’s crew, and they were used to doing one or two takes. And we’d do tons of takes and tons of improv. I’m sure it seemed very self-involved. But it was why the movie worked, because everyone had the ability to experiment.” 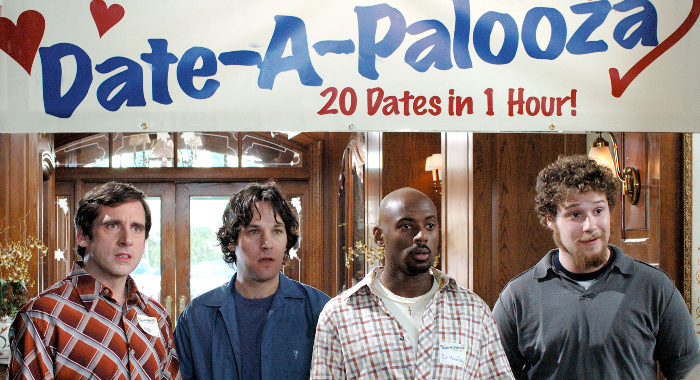 “It was a big moment for me and [Steve]. I hadn’t directed a movie before. He hadn’t been the lead in a movie before. You know, we both weren’t sure we knew what we were doing. We had an instinct, we liked the script, we hoped we weren’t crazy. But I remember Steve kept saying, ‘I’m trying to be nice to our casting director because if this movie bombs I want her to still use me.’ That was some of the energy we had – we’re going for a big swing here, and we hope we’re right, but we’ll see. It was very exciting, and we laughed our asses off the whole time.”

“You know, it gave us all our careers.”

“I look back at it as sort of a high point in my career. I got to work with so many of my friends – my wife Leslie Mann was so hilarious as Nicky the drunk girl. It was fun that we all had the courage to try something crazy, and it happened to work out. You know, it gave us all our careers.” 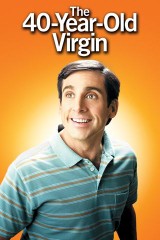