JESSICA CHASTAIN TO PLAY ADULT BEVERLY IN IT: CHAPTER TWO 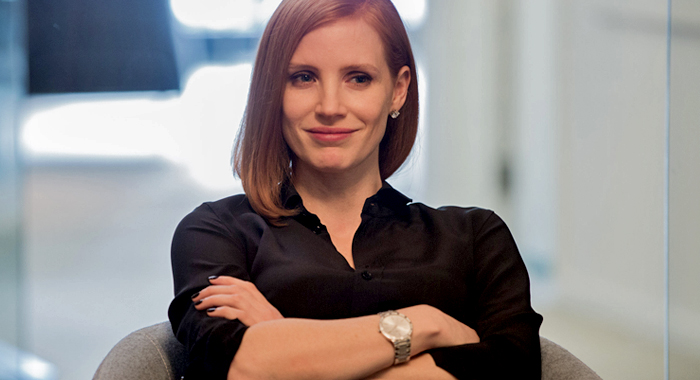 Not every piece of Hollywood news is particularly surprising or unexpected, even if it remains unconfirmed for quite some time. One recent example of this involved Jessica Chastain and her Mama director Andy Muschietti. Back in December, Chastain expressed interest in reuniting with Muschietti on IT Chapter Two, playing the adult version of Beverly, but expressed interest doesn’t always translate into a concrete reality. Well, as it turns out, Chastain is now officially in negotiations with New Line Cinema for the role in the sequel, which picks up the story decades later as the kids reunite in Derry to bring down Pennywise the evil clown monster for good. IT Chapter Two is scheduled for September 6, 2019, with no other films yet scheduled for that weekend or the weeks immediately before and after. Last fall, the first half of the IT adaptation earned $327 million domestically and over $700 million worldwide.

Though its release date (11/8/19) is currently still 21 months away, it’s arguably a little surprising that James Bond 25 doesn’t yet have a director. MGM and James Bond production company Eon are apparently very aware of this, however, as they are reportedly close to making a deal with a director to take over where Sam Mendes (Skyfall, Spectre) left off. No formal offer or negotiation has been started yet, but the director at the top of their wish list is Danny Boyle (Trainspotting, Slumdog Millionaire, 127 Hours). Daniel Craig remains cast for what will be his fifth film as James Bond (one more than Pierce Brosnan, and one fewer — officially — than Sean Connery and Roger Moore). If Boyle does sign on for James Bond 25, he will reportedly reunite with his frequent screenwriter, John Hodge (Trainspotting, Shallow Grave, The Beach).

2. ANNE HATHAWAY IS THE LAST THING HE WANTED

Netflix’s Mudbound counts itself among the films that received multiple nominations for this year’s Academy Awards, with Oscar nods for Best Supporting Actress (Mary J. Blige), Adapted Screenplay, Cinematography, and Original Song (also Mary J. Blige). (And you can stream it right here.) The film’s director, Dee Rees, is already preparing her next film, which we discovered this week is an adaptation of a 1996 novel by Joan Didion (Up Close and Personal, 1976’s A Star is Born) called The Last Thing He Wanted, and Anne Hathaway is in talks to star. The film, a political thriller, would feature Hathaway as “hardscrabble journalist Elena McMahon who finds herself on dangerous ground as the Iran Contra Affair’s arms for drugs plot reaches its tipping point.” (The He of the title is her father, who was an arms dealer in Central America in the 1980s, a la Tom Cruise’s role in last year’s American Made.) All three of Rees’ films to date have been Certified Fresh.

Earlier this year, British director Paul King (Paddington) broke an RT record as his sequel Paddington 2 became the film with the most reviews to remain at a remarkable 100% on the Tomatometer. In addition, last week the Ketchup reported that King had signed with Warner Bros for their third adaptation of Willy Wonka and the Chocolate Factory. Paul King is now also in talks with Walt Disney Pictures to develop a live-action remake of their 1940 animated classic Pinocchio. Sam Mendes (Spectre, American Beauty) had previously been developing the film, but he recently departed the project. Meanwhile, Guillermo del Toro (The Shape of Water) has also been working on his own Pinocchio, and Robert Downey Jr. has also been trying to get one going for years as well.

4. LUPITA NYONG’O TO STAR AS TREVOR NOAH’S MOM IN BORN A CRIME

Trevor Noah is the South African comedian who took over The Daily Show from Jon Stewart in 2015 after he retired after 16 years. A year after he took on the gig, he followed up with a memoir, Born a Crime: Stories from a South African Childhood, and that book is now on its way to being adapted as a film. Lupita Nyong’o (Black Panther, 12 Years a Slave) is now attached to produce (along with Trevor Noah) and star in Born a Crime, playing Noah’s mother, Patricia Nombuyiselo Noah. Born a Crime does not yet have a director or screenwriter attached, but Nyong’o’s involvement is expected to help speed up both development fronts. Noah’s mother “at first concealed her son to keep him safe from the threat of being taken by government forces to later giving everything to him in order to break a cycle of poverty and violence.” Lupita Nyong’o also appeared on The Daily Show with Trevor Noah this week to discuss her involvement.

5. JURASSIC WORLD 3 ALREADY SCHEDULED FOR THE SUMMER OF 2021

We’re still just about 4 months shy of the release of this summer’s dinosaur sequel Jurassic World: Fallen Kingdom (6/22/18), and considering Universal made over $1.67 billion worldwide with 2015’s Jurassic World, they are perhaps justified in thinking that the sequel will be a massive hit as well. This week, that optimism manifested in the news that Universal has already planted a release date flag for Jurassic World 3 (June 11, 2021). The film does not yet have a director officially attached, but it’s being adapted by the team of Emily Carmichael (cowriter of Pacific Rim: Uprising) and Colin Trevorrow (who also directed Jurassic World). Jurassic World 3 is now the second film scheduled for June 2021, in addition to an untitled Pixar movie (a week later on 6/18/21).

4. YARA SHAHIDI FROM BLACK-ISH KNOWS THE SUN IS ALSO A STAR

18-year-old Yara Shahidi is probably best known for playing Zoey on TV’s black-ish, and for recently spinning off from that show in her own series grown-ish. Shahidi is also already planning on expanding into the movies, as she is now in talks with MGM to star in her first major feature film. The project is an adaptation of the YA novel The Sun is Also a Star by Nicola Yoon, whose novel Everything Everything was also adapted into a film just last year and didn’t fare so well with critics. Girls Trip writer Tracey Oliver is on board to adapt The Sun Is Also a Star, but the Rotten score of Everything Everything makes this a borderline “Rotten Idea.”

It’s remarkable how much can change in just one year. Less than 11 months ago, The Weekly Ketchup reported the news that Joss Whedon (Buffy the Vampire Slayer) had signed on with Warner Bros to write, direct, and produce a new Batgirl movie. (This was also just before Whedon took over the finishing directing touches on last year’s Justice League.) This week, Joss Whedon officially departed the Batgirl project, saying that “I really didn’t have a story,” and that “I’m grateful to Geoff and Toby and everyone who was so welcoming when I arrived, and so understanding when I… uh, is there a sexier word for ‘failed’?” (This news came just after it was reported that WB’s next DC Comics projects after Wonder Woman 2 were likely to be The Flash: Flashpoint and Batgirl.) Variety also reports that Whedon’s departure is related to “the studio’s desire to seek more female directors,” which Joss Whedon obviously, is not. Before anyone was able to fully publish opinion pieces on Whedon’s departure, we learned what the future of Batgirl might be. Writer Roxane Gay (of Marvel’s Black Panther: World of Wakanda) took to Twitter, saying, “Hey @DCComics I can write your batgirl movie, no prob.” Warner Bros. producer Michelle Wells quickly replied publicly on Twitter, and it appears Batgirl might already have a new writer.

Three years ago, director George Miller delivered the amazing soft reboot of his post-apocalyptic Mad Max franchise with the Certified Fresh sequel Mad Max: Fury Road (97%). Some studios, however, may have learned the wrong lesson from the success of Fury Road, particularly in light of this week’s news. There is reportedly a Zorro reboot called Z in the works, and it is variably described as being set in the “near future,” or in a post-apocalyptic setting (or maybe both). Gael Garcia Bernal (The Motorcycle Diaries) has been attached to star in Z for a while, and this week, he was joined by Kiersey Clemons (Dope). Clemons had previously been attached to costar in DC Comics’ The Flash, but that was when it was being developed by her Dope director Rick Famuyiwa (who has since left that project).

1. ARE YOU HUNGRY FOR A MOVIE ABOUT FLAMIN’ HOT CHEETOS?

A few years ago, 20th Century Fox released the biopic Joy based on the true story of Joy Mangano, the inventor of the Miracle Mop, starring Jennifer Lawrence. Early on, the film was commonly described as the “Miracle Mop movie,” but when Fox actually started marketing Joy, the connection to the mop was sort of concealed in the trailers. That may be what eventually happens with this new film, but at this stage, it sounds even goofier. Fox Searchlight is now developing a live-action movie about the popular snack food Flamin’ Hot Cheetos. The biopic, currently called Flamin’ Hot, will tell the true story of Richard Montanez, “who grew up as a migrant farm worker picking grapes in the fields of Southern California before becoming a janitor at Frito-Lay. It was while working at the company that Montanez came up with the idea to create Flamin’ Hot Cheetos.” Flamin’ Hot is also being produced by preacher and motivational speaker DeVon Franklin, who also produced the inspirational film Miracles from Heaven (Rotten at 43%).