Critics say Charlie Kaufman's latest is another unique vision anchored by fantastic performances that will be rewarding for fans but might frustrate unprepared viewers.

Based on the psychological horror novel by Iain Reid, I’m Thinking of Ending Things is the latest head trip from Charlie Kaufman (Synecdoche, New York), this one a Netflix Original. The first reviews of the movie are predominantly positive, but there’s a consensus that it’s not for everyone given that the filmmaker’s usual non-literal and existentialist storytelling leads to some very weird places. But even if you’re not the biggest fan of Kaufman, you might find enjoyment in the performances by leads Jessie Buckley and Jesse Plemons as a couple heading to meet his parents — as well as Toni Collette and David Thewlis as those parents — in the closest we get to a straightforward plot.

Here’s what critics are saying about I’m Thinking of Ending Things:

[It’s] his most tender film: his intricate flourishes are in service of something far gentler and open-hearted than any of his previous work.
– Luke Gorham, In Review Online

I’m Thinking of Ending Things is by far his bleakest, so steeped in suffocating anxiety it should come with a mental health advisory.
– David Rooney, Hollywood Reporter

It’s possibly Kaufman’s most challenging work yet. Whether that challenge will reward you depends on your taste and tolerance.
– John Nugent, Empire Magazine

I’m Thinking of Ending Things feels like both an act of self-parody for its director and also a radical departure from his previous work…it takes Kaufman’s usual fixations and turns them inside out.
– David Ehrlich, IndieWire

Which of his films is it most reminiscent of?

A perfect companion piece for the physical deterioration on display in Synecdoche… [but] I’m Thinking of Ending Things is completely focused on the interior and becomes all the more terrifying and heartbreaking in its various turns.
– Kyle Pinion, ScreenRex

Hardcore Kaufman heads will get the most out of I’m Thinking of Ending Things — although I’d rate myself as a significant admirer of his work, and this left me colder than anything he’s done since Human Nature.
– Matt Singer, ScreenCrush

Feels like a spiritual mate of sorts to Amy Seimetz’s recently released She Dies Tomorrow in its means towards pondering mortality.
– Tomris Laffly, The Playlist

Tonally and structurally, it reminds me a lot of mother!, Darren Aronofsky’s similarly phantasmagorical tale of an unhappy couple trapped in a country house.
– Matt Singer, ScreenCrush

Will fans of the book appreciate the adaptation?

Kaufman has probably made as complex and audaciously loopy a film as admirers of Reid’s novel could have desired.
– David Rooney, Hollywood Reporter

In adapting this generic puzzlebox setup, Kaufman demonstrates an elegance of vision elsewhere absent from his work.
– Luke Gorham, In Review Online

Kaufman produces a finale so close in spirit to the novel that it feels pulled from the same pages. Or at least ripped from an alternate-universe version of Reid’s book.
– Barry Hertz, Globe and Mail

Viewers will probably benefit from familiarizing themselves with the source material.
– Hannah Woodhead, Little White Lies

If you’re trying to follow it without having read the book, it may not make a lick of sense – and even if you have, Kaufman goes in directions that Reid never did.
– Steve Pond, The Wrap

Does the movie work as a horror film?

[It’s] a waking nightmare — its horrors are the more mundane, existential fears of aging out of love, of relevance, of your own mind.
– Clint Worthington, Consequence of Sound

Nothing but the existential terror of our own existence… Thinking of Ending Things is awash in a sea of anxieties to drown its audience in fear and sorrow.
– Matt Goldberg, Collider

Charlie Kaufman, true to unique, auteur form, has crafted a story that invokes so much more than what conventional genre classification easily describes.
– Leigh Monson, What to Watch

It turns out that Christopher Nolan is not the only director making long, stylish brain-teasers these days.
– Steve Pond, The Wrap

I’m Thinking of Ending Things feels less like a film about thought than it does a thought that’s been filmed.
– David Ehrlich, IndieWire

By the time the film’s final minutes arrive, you’ll be scratching your head and beaming with solemn understanding at the same time.
– Clint Worthington, Consequence of Sound

Is it maybe too weird for some viewers?

The problem with I’m Thinking of Ending Things isn’t that it’s too weird, but that it’s the work of a filmmaker who keeps asking “Is love possible?” even when he’s stacked the deck against it.
– Owen Gleiberman, Variety

The further I’m Thinking of Ending Things gets from any semblance of a recognizable reality, the less there is to care about any of the characters and what will happen to them if they ever arrive at their destination — if they even have one.
– Matt Singer, ScreenCrush

How are Jesse Plemons and Jessie Buckley?

This is Buckley’s show, and she further cements her status as one of the gutsiest and most intuitive actors in the world.
– David Ehrlich, IndieWire

Plemons establishes himself with this role as the heir apparent to Philip Seymour Hoffman… the tragic grandeur of his performance and the aching burden of Jake’s secrets creep up on you.
– David Rooney, Hollywood Reporter

And what about Toni Collette and David Thewlis as the parents?

Collette and Thewlis are easily the show-stealers, swinging moods with such vicious intensity that it’s astounding that their characters feel at all cohesive.
– Leigh Monson, What to Watch

Thewlis delivers the best line-reading of the year while describing the temperature during his brief appearance.
– Hannah Woodhead, Little White Lies

Collette either escapes [Kaufman’s] grasp or was unfortunately encouraged by her director to run through a gamut of tics that not-so-fondly recall her terrorized possession in Hereditary.
– Barry Hertz, Globe and Mail

Who else deserves recognition?

Jay Wadley’s flurried, virtuosic score is as much of a scene-stealer as Molly Hughes’ lived-in and creaky production design.
– David Ehrlich, IndieWire

It’s in the editing by Robert Frazen and the cinematography by Lukasz Zal that gives the film kinetic energy to place you right in the middle of the action, it’s almost alienating.
– James Clay, Fresh Fiction

So is it good or bad?

It exists outside the good/bad spectrum because it is a very successful at being excruciating. It is a horror film without reprieve and without answer.
– Matt Goldberg, Collider

On many levels it’s a bold, brilliant work… yet in many fundamental ways, the movie is frustrating; it’s frequently a hard slog, as distancing as it is illuminating.
– David Rooney, Hollywood Reporter

With Kaufman, always, I’m willing to take the vexations along with the rewards.
– Michael Phillips, Chicago Tribune

[It’s] a work unlike anything else you’re bound to see this year. It’s haunting and hilarious. Disturbing and captivating. It hypnotizes you like a cobra than goes in for a kiss instead of a bite.
– Chris Evangelista, Slashfilm

Will we need to see it more than once?

I suspect that many viewers will want to rewatch the film fairly quickly, to piece together the pieces of meta narrative sprinkled throughout and to make full sense of an ending that might be a bit less definitive than expected.
– Leigh Monson, What to Watch

I felt like I would absolutely appreciate the film more if I watched it a second time, and could not fathom having the patience to sit through it again any time soon.
– Matt Singer, ScreenCrush

I’m Thinking of Ending Things premieres on Netflix on September 4. 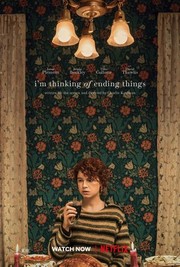