Hear Us Out: The Haunting of Hill House Episode 6 Might Be This Year's Best Horror Movie

Mike Flanagan's adaptation of Shirley Jackson's novel proves that skeletons in the closet can be just as scary as malevolent demons, psychotic killers, and rampaging aliens.

Two 2018 films, Certified Fresh titles A Quiet Place and Hereditary, proved that there’s a lot more to a great theatrical horror experience than just a collection of jump scares — though jump scares will always have their place. And those titles were just the beginning of the year’s successful feature film horror offerings; The Nun scored at the box office (if not on the Tomatometer), and this Friday’s release Halloween was just Certified Fresh and is expected to cross $100 million at the domestic box office easily, putting it in the top 10 highest grossing horror films ever.

Small-screen horror entertainment, however, has experienced mixed levels of success recently, which is proved out in the season-to-season Tomatometer score fluctuations of TV horror staples like The Walking Dead and American Horror Story and the cancellation of a gem like Fox’s massively underappreciated The Exorcist sequel series.

On the top end: Stranger Things.

It’s perhaps no coincidence that the latest exceptional horror offering comes from the same distributor, Netflix. Mike Flanagan’s The Haunting of Hill House, a small-screen adaptation of Shirley Jackson’s classic novel, has captured the chill-seeking fancy of the streaming-TV masses and collected enough critical approval to be Certified Fresh at an impressive 90% on the Tomatometer with 49 reviews.

Spoiler alert: This article contains details about episode 6 of The Haunting of Hill House. Stop here if you have not watched the episode.

The series, which began streaming earlier in October, follows the five Crain siblings during two different eras — as kids growing up in America’s most famous haunted house (before it was famous), and as adults when their past trauma just won’t stay buried. The show accomplishes a fine balance between cinematic restraint and slow-burn terror while exploring the interconnected experiences of the disconnected family.

And its sixth episode, “Two Storms,” is, arguably — go on, argue in the comments — the best horror entertainment to hit any screen in 2018.

Yes, it’s bold to compare a 54-minute TV episode to two breakout theatrical hits — but hear us out.

With A Quiet Place, the John Krasinski–directed alien-invasion piece works best when the story is stripped of its audio, putting the audience in the position of the Abbott family’s deaf daughter as she and her parents are stalked by a mostly unseen foe. Taking away one of the five senses elevates the story, adding a great sense of urgency to the tense survivalist tale.

Flanagan triumphs with a volume game over A Quiet Place, dispersing the terrifyingly present horror in The Haunting of Hill House across a wider group and a larger time frame — there is simply more terror to go around.

Hereditary hews closer to the themes of The Haunting of Hill House, as both the movie and the series explore the toll that grief can take on each member of a struggling family unit. At one point in “Two Storms,” Steven (Michiel Huisman), the eldest brother — inadvertently? — connects the film and series in considering what he sees as his father Hugh’s (Timothy Hutton) possible mental illness. Hearing him utter the word “hereditary” in this context almost feels like a shoutout to Ari Aster’s feature film hit. But the big mysterious gimmick that Hereditary relies on ends up being revealed as something much more bonkers than a simple mental-illness story line.

Hereditary and The Haunting of Hill House work best when they explore the various ways a shared trauma can effect its lead characters. But what makes the Netflix series, most specifically its sixth episode, work just as well or even better than that film is its laser-sharp focus on the Crain family — and the emotional rawness that comes with it.

The combination of detailed world-building by Flanagan (Oculus, Gerald’s Game) and the work of the talented ensemble cast — which includes the likes of Huisman, Hutton, Carla Gugino, Henry Thomas, Elizabeth Reaser, Oliver Jackson-Cohen, Victoria Pedretti, and Kate Siegel as the elder members of the Crain family, and epic performances by the young talent playing their younger versions — comes together perfectly here in a way that has led to many to compare Flanagan’s adaptation to a spooky version of NBC’s hit drama This Is Us.

The Haunting of Hill House should certainly be categorized as horror, but the first half of the series spends a huge chunk of its time focusing on the Crain family dynamic. Standalone episodes dive deeper into each character’s life, from Luke’s (Jackson-Cohen) battle with addiction to young Nell’s run-ins with a shadowy figure known simply as “The Bent-Neck Lady.”

Cycling back and forth from the present to the past, exploring how the tragedy of death can forever change lives, the show ends up opening itself up to comparisons to other shows like HBO’s landmark drama Six Feet Under — but, you know, with ghosts. Those comparisons become background noise once the greatness of episode 6 comes into focus.

Taking place in just two locations — Shirley’s (Reaser) funeral parlor in the present, and Hill House in the past — the stories that unfold in “Two Storms” are presented as two sides to the same tragic coin. On one hand, the episode works as a dysfunctional family reunion — bringing each character together to mourn the untimely tragic death of the family’s youngest sister, Nell (Pedretti). On the other, the story brings every little bit of trauma out from hiding. Like the ghosts that have stayed hidden throughout the backdrop of the series up until this point, the deep-seated issues of the Crain family finally step out of the shadows and into the light, showing us all that the scariest parts of any ghost story are the secrets we keep.

It’s that simple notion that works as the strongest theme throughout the show’s run. And as episode 6 shows, it’s when these literal and symbolic ghosts come to light that the skin-crawling terror becomes way more tactile than we ever thought possible.

The first attention-grabbing detail of the episode comes in its first few minutes: the funeral parlor’s color palate. Various shades of grays and blues give the room a cold, unwelcoming feel, perfect for the events that end up playing out. Then, once each member of the Crain family steps into the room wearing their own shades of blues and grays, it’s clear the set dressing has more symbolism than previously thought.

That point is further driven home once we see young Nell, who died an unfortunate death upon returning to Hill House, dressed head-to-toe in bold red inside her open coffin. Much like Hill House’s red room door, Nell stands out and is now similarly inaccessible, having been swallowed into the room and ultimately to her death. It seems that even in death, Nell was just as mysterious to her family as she was in life.

Of course, once the family reunites under this roof, the drama ignites. Secrets, lies, addictions, resentment — they all join together in a flurry. And as spacious as the set seems to feel, the combination of excellent camera work and top-notch acting brings the audience even closer to the action in the most unexpected of ways.

One of the most impactful scenes in the episode happens in the story’s first half: an ultra-long shot inside the funeral home follows different characters through the length of the set, exploring multiple angles and story developments, without cutting. As the conflict plays out on screen during that 18-minute period, the horror show bleeds into the realm of intimate stage play. The movement of the camera matches each character’s struggles with grief and as the heartstrings get violently plucked, the cinematography twists in circles around everyone, suddenly becoming its own important character. With all the ghosts hiding in the tapestry of the show, what’s to say that our own perspective of the events doesn’t play a part?

But Mike Flanagan doesn’t give us the typical fly-on-the-wall stylings of a cinéma vérité flick. Instead, we’re brought into the drama, closer and closer, to the point where it almost feels like the camera is the storm in question — with the Crain family stuck right in its chaotic eye.

And just as the viewers think they have their bearings, some seamless editing shifts the show’s timelines altogether, throwing the characters and audience alike back into the past, into a storm of a different kind. With a crashing chandelier and the shattering of windows, “Two Storms” foreshadows Olivia’s (Gugino) murderous psychosis, while young Nell physically briefly disappears from reality altogether. Both in the funeral parlor and Hill House, episode 6 successfully drives home the point that trauma has no expiration date and locking this monster behind a door, in a box, or down in the basement is just one more questionable life choice that will eventually resurface in need of a reckoning.

Great news for horror fans: Flanagan is next writing and directing one of the most anticipated feature films of 2020, Doctor Sleep, based on Stephen King’s novel of the same name, which is a sequel to The Shining. The film follows a grown-up Danny Torrance, still psychic and as messed-up as ever. It stars Ewan McGregor.

The Haunting of Hill House is now streaming on Netflix. 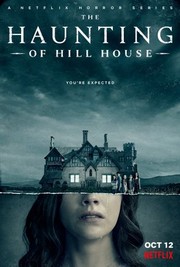