Hear Us Out: HBO's Chernobyl Might Be the Most Terrifying TV Series Ever Made

HBO's 5-episode miniseries about the Chernobyl power plant disaster proves that truth is stranger — and way more frightening — than fiction.

The concept of a nuclear disaster (and the inevitable fallout) is nothing new in pop culture. Whether it’s the hit Fallout video game franchise or horror films like The Return of the Living Dead and Robert Rodriguez’s Grindhouse installment, Planet Terror, the trope of a chemical disaster and the monsters it births into the world is a subgenre that has kept audiences entertained for decades.

Those examples are far enough removed from the real world, giving viewers an escapist perspective filled with zombified humans and mutated beasts to battle. It’s an easier pill to swallow when such a catastrophic event is flooded with a plethora of supernatural goodies.

Creator Craig Mazin’s (The Hangover Part II, Identity Thief) bleak five-part mini-series does away with the expected horror tropes audiences have become familiar with and, instead, delivers an up-close, completely terrifying, and grotesquely personal look at Ukraine’s infamous 1986 power plant explosion — including the government cover-up and devastating calamity that followed.

Here, no undead hordes or mutant hounds can be found shambling about the vacated Soviet roads. Instead, the big bad of the historical drama is largely unseen. It’s everywhere and nowhere at the same time, only making itself known to unsuspecting passersby once it’s too late. The agonizing visuals of skin melting off living innocent bodies is just the tip of the aesthetic iceberg here, and really nails home the extent of the damage caused.

The tons of toxic poison seen billowing out of the Chernobyl Nuclear Power Plant’s exposed roof is the ominous villain here. The unseen monster, followed by the even more damaging accomplice of the lies the government tells to save face, come together in a way so catastrophic, so heartwrenching, and so unbelievable that we can’t help but label Chernobyl as the scariest thing we’ve seen on TV in years — and maybe even ever.

It’s unsurprising then, that critical praise collected along the way had given the series Certified Fresh status with an impressive 96% on the Tomatometer with 47 reviews.

SPOILER ALERT: THIS ARTICLE CONTAINS DETAILS ABOUT THE FIRST THREE EPISODES OF CHERNOBYL. STOP HERE IF YOU HAVE NOT WATCHED. 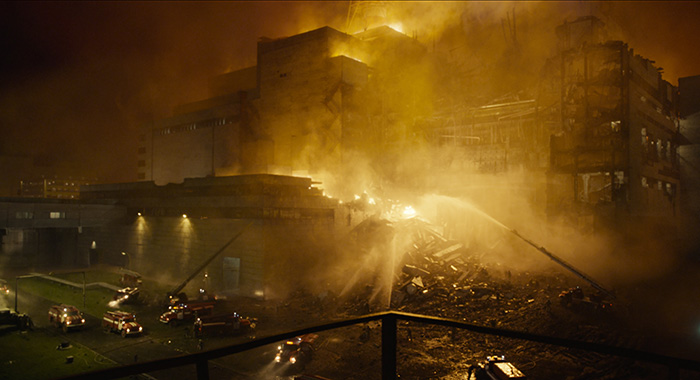 In the closing moments of episode 2, titled “Please Remain Calm,” three brave men, fully outfitted in protective suits and gas masks, wade through the flooded tunnels beneath the Chernobyl Nuclear Power Plant. With the reactor core exploded and exposed, pouring tons upon tons of nuclear materials into the air, these men — dubbed by history as “The Suicide Squad” — ventured into the bowels of the building to open the pipes in order to drain the water (which, upon hitting the open core, would allegedly create lava that would drain into Europe’s main water source). Their bravery stopped a full-blown meltdown from occurring.

It’s a horrifying moment and one that is fully brought to claustrophobic life through nothing more than dim lighting, the men’s belabored breathing, and their radiation detectors’ constant ticking sound: an ominous reminder of just how embedded in the chaos they really are. The scene is so stifling that we’d be hard-pressed not to mention our own shortness of breath upon viewing the episode.

While we’ve seen instances of such events play out in big-budget action films, it’s worth noting here that before 1986 the world had rarely faced a catastrophe like this, one whose impact on humanity and mother nature would reverberate on such a mind-boggling scale. And that detail brings with it an even more baffling truth: No one knew how to fix it.

Soviet nuclear physicist Valery Legasov (Jared Harris) and Soviet Minister of Energy Boris Scherbina (Stellan Skarsgård) are brought in to investigate and ultimately clean up the mess, rightfully carrying the story as the chemicals and news of the accident spread. It really is a rousing spectacle when you take a step back and view the miniseries from afar.

The addition of Emily Watson‘s Ulana Khomyuk — who Mazin said is a fictional character, created as an amalgamation of the nuclear scientists called in to fix things — adds an insightful layer to the world-building of Chernobyl. It was five years before the Soviet Union crumbled, meaning in 1980s Russia women were rarely seen in such scientific roles. The antiquated nature of the gender roles portrayed here gives clarity to a society and time we Americans only know passing information about. It’s probably worth noting that the Chernobyl accident happened the same year the Space Shuttle Challenger exploded and the news of that tragic instance quickly dissipated. 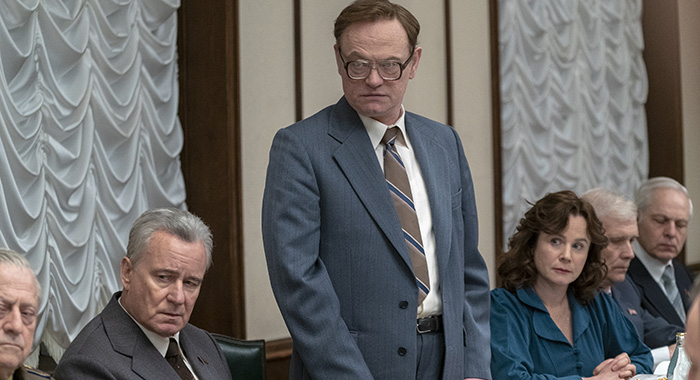 Information was the strongest weapon in Soviet Russia. And the government’s manipulation of the truth is one of the program’s more jarring elements. Johan Renck’s (Breaking Bad, Vikings) directorial eye and the coldly oppressive musical maelstrom that composer Hildur Guðnadóttir conjures up really set the mood, bringing the viewer into a grim reality many will never know. But it’s the enduring damage of lies, and the nature in which such false information can be accepted on a grand scale, that really makes the story being told here that much more frightening.

In episode 1, “1:23:45,” the audience is thrown into the deep end, watching through splayed fingers as the events in the moments and hours after the collapse of the plant’s core unfold. There’s a collective experience of, ‘We know what happened, but we don’t know how.’ As the plant’s workers begin to exhibit signs of failing health, we watch firefighters battle the blaze, unprotected, literally shooting gallons of water into a fission reactor — something you’re absolutely not supposed to do. We watch as one poor worker is sent to the roof to look down into the open core, to confirm or deny that the impossible actually happened, knowing full well he’s dead if he does and dead if he doesn’t.

Through being told that what is happening isn’t actually happening, from the plant’s supervisor all the way up to Mikhail Gorbachev (David Dencik) himself, the show’s underlying theme really begins to take shape. In the Soviet Union, amid the backdrop of a catastrophe the scale in which the world has never seen, the truth isn’t the truth.

People may die, the water supply may become contaminated, the majority of the continent may become uninhabitable, but for the Russian government, the real concern was the spread of information. As we see onlookers relishing in the beautiful blue glow of the reactor melting down in the distance, a mist of unseen particles rains down — Legasov referred to these particles as tiny bullets, holding the power to rip apart our cellular structure from the inside out — and the citizens of Pripyat were none the wiser that they were being murdered where they stood. 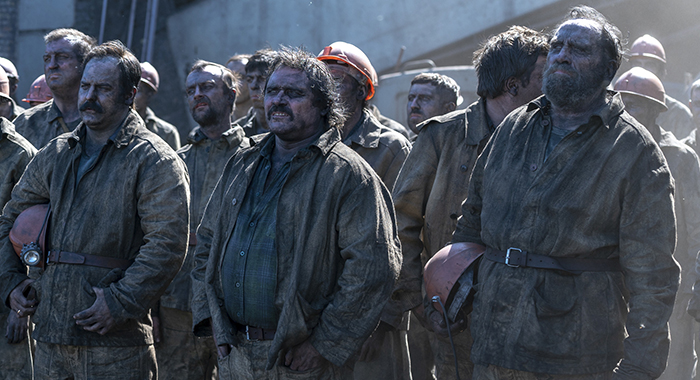 Phone lines were cut and people were not allowed in or out of the city, leaving an obscene number of innocent civilians trapped in what can only be described as the perfect scenario for a survival horror video game. But, while we’ve seen the irradiated region, now known as the Exclusion Zone, appear in popular releases like Call of Duty: Modern Warfare, the reality that this actually happened and no one — be it the government officials covering up the mess, the scientists trying to fix the mess, or the doctors working to mend those left mortally wounded by said mess — knew how to handle things makes it hard not to look at the state our world is in today.

One could easily look at Chernobyl through the lens of a zombie movie, where the zombies never show up. In The Walking Dead, the virus is airborne, making it clear that everyone living in the world will eventually turn into a brain-hungry monster. That horror concept definitely came from somewhere real and it’s hard not to think of the very real damage a nuclear disaster like this can have. Coming into contact with toxins through the air we breathe without instantly knowing you’ve become infected not only spells out your own mortal fate, it turns you into the carrier of the disease as well. One shared touch of infected skin or atomically damaged clothing and things won’t end well for you. Sure, you may not become a member of the undead — the real result is much worse. Remember the tiny bullets analogy referenced above? Exactly that.

The upsetting fate of 25-year-old Vasily Ignatenko (Adam Nagaitis), the firefighter we followed to the disaster in the first episode, is just one example of this. He thought, like the rest of his team, that he was on his way to put out a simple roof fire. But then, as we saw in episode 3, “Open Wide, O Earth,” any remnant of the man he was had melted away like the flesh from his bones. Just halfway through the miniseries and Chernobyl‘s makeup/effects just keeps getting better and better — and by “better and better,” we mean “more and more horrifying.” 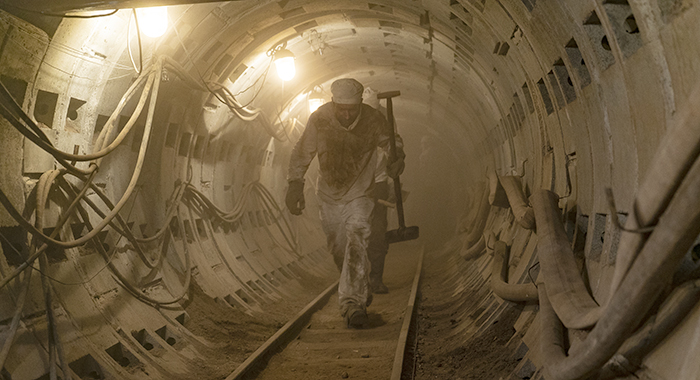 The Chernobyl disaster is infamous. We speak of it every time another nuclear accident occurs. We know how the story ends. That doesn’t matter, though. Not really. It’s the details of the journey, along with the harrowing sacrifices of these men and women portrayed on screen, that really nail home the palpable blanket of tension millions of people lived under at that time. With each episode of the HBO miniseries the vice tightens a little bit tighter, making it almost impossible to accept the cinematic story being told here is based on real events.

It did happen, though. And through the white-knuckled viewing of each tense moment, we’d be hard-pressed not to constantly remind ourselves of that fact. The truth got out about Chernobyl. The series explores it all, bringing to light that history will, in some way or another, continue to repeat itself. But, tragic accidents and human mismanagement aside, one thing we should all take away from the series is this: Lies are only as powerful as the dedicated belief that supports them.