The Simpsons’ Apu controversy reminds us of TV's history of stereotyping. 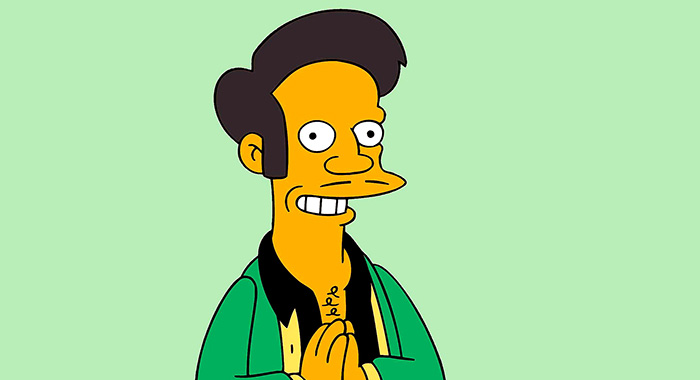 This week, The Simpsons responded to a backlash against one of its most beloved characters and seemed to only make things worse.

Vocal chameleon Hank Azaria has played Kwik-E-Mart proprietor Apu Nahasapeemapetilon since the first season, winning acclaim and collecting an Emmy for his efforts. However, as Hari Kondabolu‘s 2017 documentary The Problem with Apu pointed out, Apu is a problem for Americans of Indian descent, and Indians who watch the show across the globe.

The Simpsons’ response? A dismissive exchange. Marge and Lisa are reading a fantasy novel with outdated stereotypes of Irish and Latin American people when Lisa comments, “Something that started decades ago and was applauded and inoffensive is now politically incorrect. What can you do?” The camera then pans to a photo of Apu, the implication being they created the character in a different time, so it’s too late to change now.

Viewers of The Simpsons episode, including Kondabolu himself and other comics, have said they expect more out of the show.

“In ‘The Problem with Apu,’ I used Apu & The Simpsons as an entry point into a larger conversation about the representation of marginalized groups & why this is important. The Simpsons response tonight is not a jab at me, but at what many of us consider progress.” – Hari Kondabolu

Despite The Simpsons producers’ statement that “the episode speaks for itself,” television historians feel questioning stereotypes should be a part of the evolution of television. Ron Simon, curator of television/radio at the Paley Center for Media, said the kind of feedback Apu received this week, and in the past, is healthy.

“Television and even radio portrayals, especially in comedy, have always been critiqued and questioned,” Simon said. “These questions are pretty much the building blocks of how we should think about what we’re watching on television. Especially in comedy where you always are dealing with some type of stereotype, there are more dimensional stereotypes and then there are stereotypes that are really lazy.”

Here are 11 TV characters who — like Apu — were beloved in their day, but make us cringe now. Simon joined us to give a historical perspective on these characters as we traveled back through the airwaves. 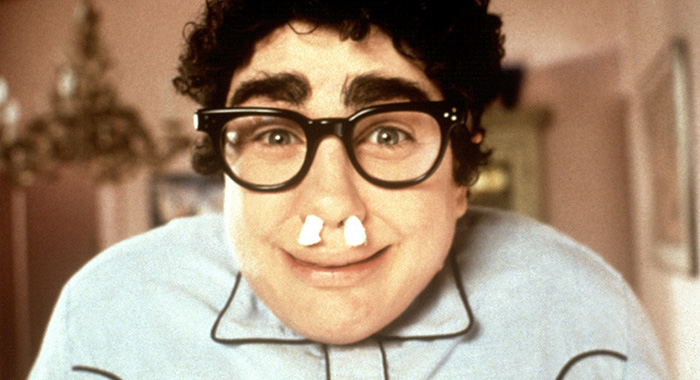 Why fans loved Pat then: Audiences applauded every Pat sketch, which featured Julia Sweeney dressed androgynously so that no one knew if the character was a male or female. Viewers laughed as others comically tried to identify her.

Why Pat is hard to watch now: Pat presented an opportunity for cisgendered people to laugh at the very idea of being trans or nonbinary. Transparent creator Jill Solloway called Pat an “awful piece of anti-trans propaganda that was handed out for years.” Sweeney has acknowledged Solloway’s point. 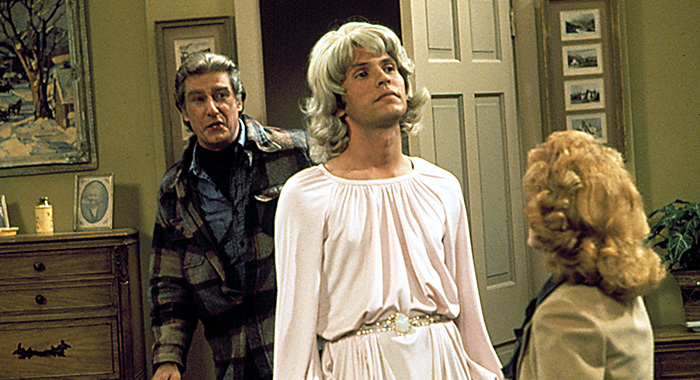 Why fans loved him then: This was Billy Crystal’s breakthrough role and one of the first openly gay characters on television.

Why he’s hard to watch now: Even during Soap’s prime-time run, gay groups like the Gay Media Task Force and the International Union of Gay Athletes were concerned about Jodie’s stereotypically flamboyant portrayal. “The question is when you look at it, is it fully rounded or did he just stay on the stereotypical level? For many, he just stayed on the level,” Simon said. “It was a breakthrough of sorts but how far did it go?” 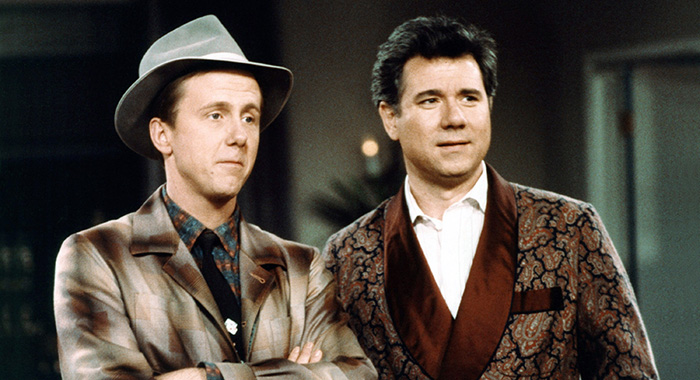 Why fans loved him then: Dan Fielding’s (John Larroquette) pickup lines were usually hilarious, even when court was in session. If he couldn’t get public defender Christine Sullivan (Markie Post), he would find a new conquest each week.

Why they’re hard to watch now: Today, prosecutor Dan Fielding would be booted out of the court for sexual harassment. Simon points out that characters like him are symptoms of mostly male TV writers rooms. “You can almost look at any program and see whose eyes you’re seeing it through,” Simon said. “Who do they want you to identify with?” 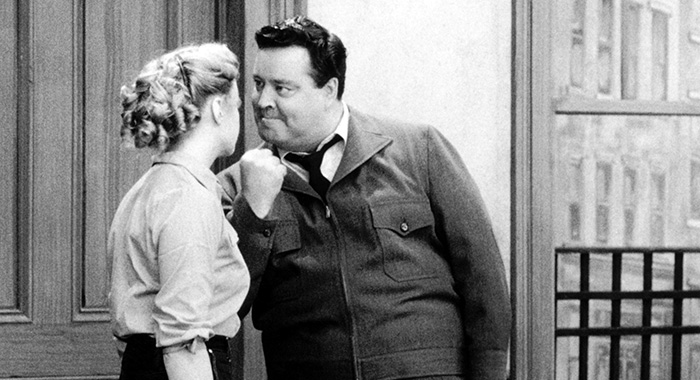 Why fans loved him then: Ralph (Jackie Gleason) and Alice Kramden (Audrey Meadows) were sitcom royalty, along with Lucy and Desi, and helped to define what a sitcom would be for decades to come. “People will defend it by saying that there was certainly a good-heartedness about Ralph,” Simon said.

Why he’s hard to watch now: When Ralph said “Bang, zoom, to the moon,” he was talking about how hard he was going to hit Alice. Really. “The writers obviously didn’t see it when they were writing but certainly if you look at it through today’s eyes, scholars can question what exactly is that relationship like?” Simon said. “There’s both been pros and cons against that show.” 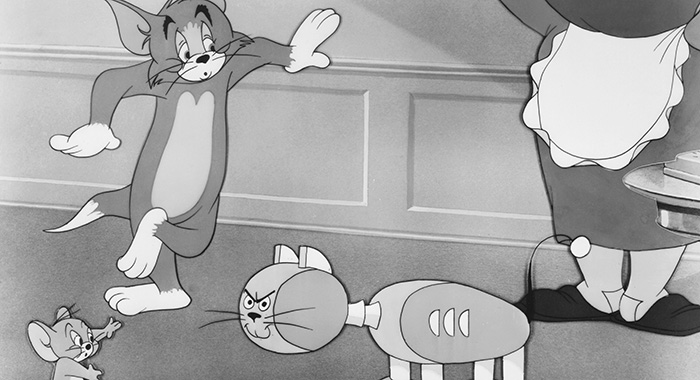 Why fans loved her then: The Simpsons is not the first cartoon with dated racial stereotypes. Tom’s owner between 1940 and 1958 was a caricature of an overweight black woman. She has been edited out of broadcast airings so few have actually seen her.

Why she’s hard to watch now: It’s literally hard to watch Mammy Two Shoes because she’s been cut out. Two rarely seen episodes even feature Tom and Jerry in blackface. By the ’60s, TV had evolved past cartoon strips of the ’40s. “Whether networks or local stations had guidelines, they were certainly conscious of what they wanted their own kids to see,” Simon said. “Obviously the people making the decisions had seen a lot of the original cartoons and there was some historical progression on how to portray characters.”

6. The General Lee, The Dukes of Hazzard (CBS) 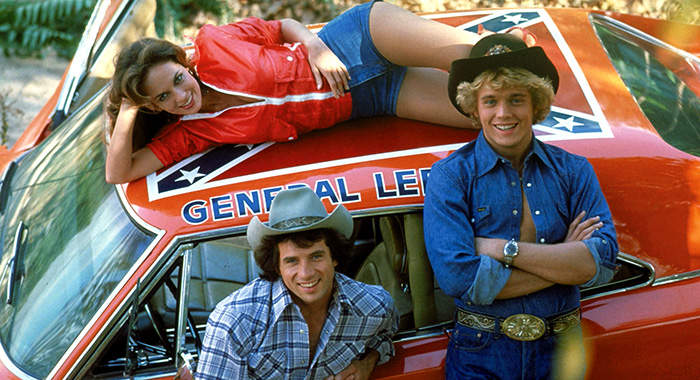 Why fans loved it then: The General Lee was the fastest car in the South, and you could count on it hitting a ramp before a commercial break!

Why it’s hard to watch now: The hood of the General Lee is painted with the Confederate Flag — the same flag that no longer flies outside the South Carolina capitol building. Some groups still fight to display the Confederate flag, but Simon knows of none intent on preserving it on the General Lee. Even the 2005 movie remake showed the car getting dirty looks from passersby. And let’s also not forget the objectification of Daisy Duke (Catherine Bach).

7. Archie Bunker, All in the Family (CBS) 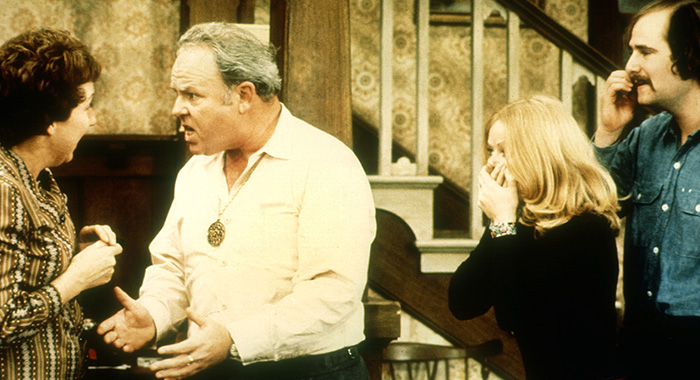 Why fans loved him then: Archie Bunker (Carroll O’Connor) said things you just couldn’t say on TV — or you thought you couldn’t, until Archie Bunker said them. Some viewers loved to hate him, but there were probably plenty of viewers who agreed with his cantankerous racist and sexist views. “He was supposed to be satire, but the writers were savvy enough to know that the character would be lambasted by some and approved or identified with by others,” Simon said. “That’s something to think about now.”

Why he’s hard to watch now: Bunker was always intended to be backward and despicable, a satire of a person who held certain views. But the intention doesn’t always square up with the outcome. “I think a younger generation might have some questions about what that character meant,” Simon said. “He was satire. [But] was the satire really working? There were critics at the time that really questioned that show, and their comments I think are valid today.” 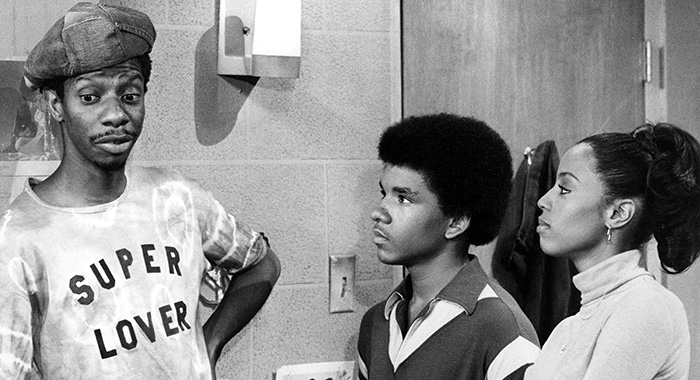 Why fans loved him then: Good Times was a landmark for representation: People tuned in for the first sitcom starring an African-American family, and Jimmy Walker stole the show as J.J.

Why he’s hard to watch now: J.J. was perpetuating negative stereotypes of black men. Esther Rolle, who played J.J.’s mother, told Ebony magazine in 1975 she felt J.J. was portrayed as an unemployed illiterate — and that damaged the show. “Negative images have been slipped in on us through the character of the oldest child,” Rolle said in the interview.

In a show with otherwise positive portrayals of a black family, J.J. represented a old show business stereotype that was out of place. The character’s “Dy-no-mite” catch phrase is just one example. “Minstrel was exaggerations both in mannerisms and speech, very superficial and very exaggerated,” Simon said. “It goes back to the 19th century where so many of these traditions come from, and they are carried on in television and radio, perhaps digital today.”

Why fans loved him then: At the time, Western fans reveled in the adventures of a Texas Ranger teaming up with a Native American sidekick — although they called him “Indian” back then.

Why he’s hard to watch now: The Lone Ranger still portrayed Tonto (Jay Silverheels) as a stereotypical savage. He was a good guy, but he still spoke in broken English. His very name is problematic: There’s no word in any Native American language, but in Spanish it translates to “stupid” or “fool.” “Certainly any portrayal of the West is ripe for reconsideration, especially how Native Americans and others were treated and portrayed on the screen,” Simon said. 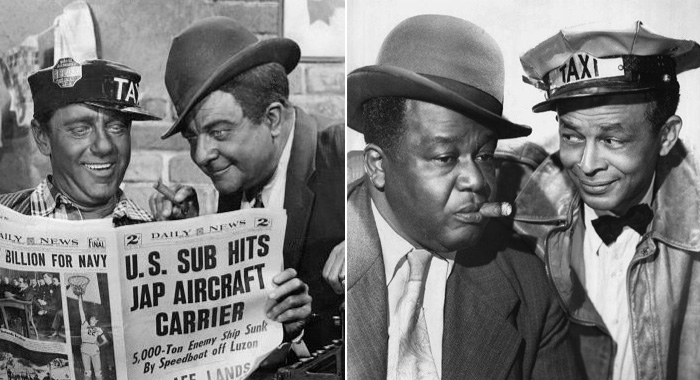 Why fans loved them then: The characters from radio came to life so viewers no longer had to picture Amos (Alvin Childress) and Andy’s (Spencer Williams) adventures in their heads. The characters were endearing goofballs, as long as you acknowledged they were limited.

Why they’re hard to watch now: The TV series at least had the sense to cast actual black actors. The white creators of Amos and Andy, Freeman Gosden and Charles Correll (pictured above left), did their voices on the radio. Though the TV show (pictured above right) did not present white actors in blackface, it still traded in minstrel-show stereotypes.

“A lot of African-Americans were hoping for progress, having been a part of the American military operation in World War II and hoping to see America’s racist past not on television,” Simon said. “Amos ‘n Andy were more vaudevillian characters using exaggerated speech and mispronunciations.” 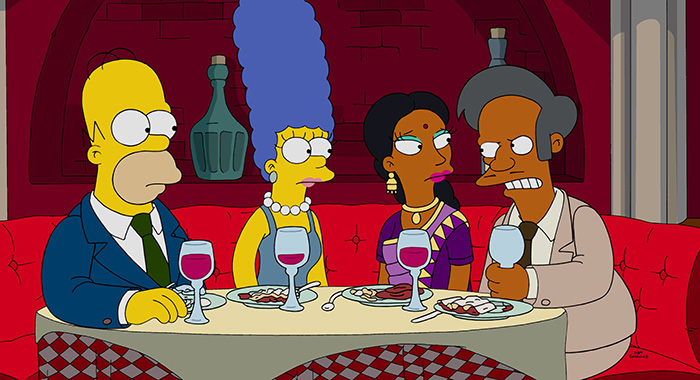 Why fans loved him then: Apu was a smiling, welcome sight on the show, always welcoming Bart or Homer with an wide grin and farewelling them with a “come again.” And he was always welcome in the Simpsons family — fans still remember his showstopping (and heartbreaking) song,  “Who Needs the Kwik-E-Mart?,” which he sang before Homer joined him on an adventure to get his job back. The Simpsons even hosted Apu’s wedding.

Why he’s hard to watch now: It’s still a white man doing an Indian accent. Which the show acknowledges. The Simpsons even introduced Apu’s much more Americanized nephew Jamshed (Utkarsh Ambudkar, an Apu critic himself), who complained about the stereotypes Apu was representing, but the latest episode implies it is unlikely the show will address the issue again.

“The Simpsons is considered by many to be cutting edge and always irreverent,” Simon said. “You always thought The Simpsons were on top of the game. The question is: Are they doing the same things as other average sitcoms? That’s what you have to ask in the portrayal of Apu.”

Are there TV characters that make you cringe? Tell us about it in the comments.