Escape Room Is Creative but Unoriginal

2019 kicks off with a horror film that'll make you rethink that birthday outing you've been considering.

Happy New Year! This week at the movies, we’ve got a death trap masquerading as entertainment (Escape Room, starring Deborah Ann Woll and Taylor Russell). What are the critics saying? 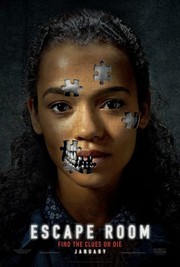 For decades, Hollywood has tapped into the zeitgeist for inspiration to come up with new and inventive ways to scare the pants off audiences, and if there’s any modern phenomenon absolutely ripe for the horror flick treatment, it’s the rising popularity of escape rooms. Enter the aptly titled Escape Room, which brings together six strangers from varying backgrounds to navigate a series of increasingly deadly themed rooms designed to test their mettle — or maybe there’s a more sinister ulterior motive to the proceedings. That’s what the film asks viewers to ponder, anyway, as each character faces the prospect of a violent death by way of clever traps. Critics say Escape Room features some amusing set pieces and effective tension, but its twists are contrived and its death-trap mechanics feel like a derivative mish-mash of the Saw and Final Destination films. It’s likely to satisfy anyone who buys into its set-up, but it may also feel like a puzzle you’ve solved before.