DVD Tuesday: Planet of the Ape

Movie geeks love Tuesdays, and here’s why: It’s DVD Day! With each new Tuesday comes the promise of varying DVD goodness, so I thought it might be fun to do a reminder-piece each week, if only to help my fellow disc junkies to keep their shopping lists in order. And it looks like I picked a pretty good week to get started, because beginning today, Peter Jackson‘s "King Kong" can be yours!

Scoring an impressive 84% on the Tomatometer and tallying nearly $218 million at the domestic box office, "King Kong" was a huge treat for tons of moviegoers. True, Universal was betting on a relatively higher box office showing, but it’s tough to knock a flick that crossed the $210 million mark. And now that the DVDs are out, the profit margin is about to skyrocket. "Kong" hits DVD in your choice of a single-disc serving or a two-platter SE … but be warned: Universal is well known for "double (& triple) dipping, and the eventual arrival of a multi-disc Mega-Swanky Kongdition is almost a foregone conclusion. (The two-discer, which is what I’ll be purchasing in about two hours, comes with three hours worth of post-production diaries and various Peter Jackson-y treats.)

And for those who still need a copy of the original "King Kong" on DVD, WB sliced their phenomenal special edition down to a bare-bones single-disc release, which also hits stores today.

Most of the majors are (wisely) opting to stay out of the monkey’s way this Tuesday, but Sony’s not afraid. Today you can also purchase your "Memoirs of a Geisha" DVD (35% Tomatometer, $57m box office), which comes with a pair of audio commentaries, 11 featurettes, and some recipes. (Yep, I said recipes!)

Also hitting the shelves today is the urban drama "Get Rich or Die Tryin’," which scored a measly 18% on the Tomatometer and grossed about $31 million at the box office, the psycho-thriller "Stay" (26% T-meter, $3.3m), and the sci-fi turkey "A Sound of Thunder," which hit a whopping 7% on the Tomatometer on its way to a $1.7 million box office run. (This one’s good for fans of bad cinema. Rent it and see!)

Fans of the catalog titles will want to check out an all new "Godzilla" Monster Edition (or maybe not), Adam Goldberg‘s directorial debut "I Love Your Work," the "Sliver" special edition that nobody asked for, and (finally!) the DVD debut of some Peanuts classics: "A Boy Named Charlie Brown" and "Snoopy Come Home" both arrive on DVD today, and I know a few Gen-Xers who’re pretty darn psyched about it. (Bring on "Race for Your Life, Charlie Brown" and "Bon Voyage, Charlie Brown (and Don’t Come Back!") already!) 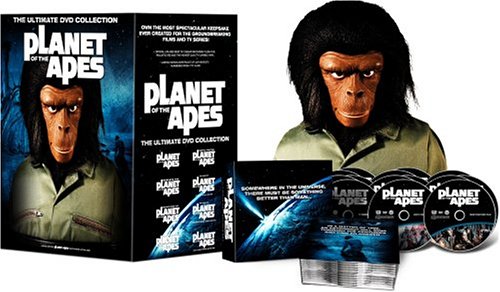 Whew, that’s a lot of apes for one Tuesday. The secret words for next Tuesday are "Narnia" and "Brokeback."