Our writer, new to the series, seeks out other Lynch newbies to find out if the legend lives up to the hype. 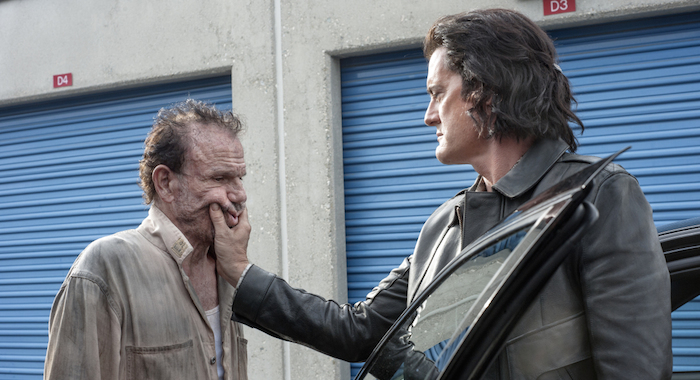 The revival of Twin Peaks, the ’90s cultural phenomenon created by David Lynch, was announced years ago. There was plenty of time for anyone who missed the show’s original two seasons and movie, Twin Peaks: Fire Walk With Me, to catch up. But life gets busy and Netflix drops a new season of some show every week —Master of None and Kimmy Schmidt aren’t going to watch themselves! — so viewers who never found the time to catch up on Twin Peaks probably aren’t alone.

Having never seen a frame of Twin Peaks, I now understand the plight of Person On Twitter Who Doesn’t Watch Game of Thrones.

There were plenty of fans on Twitter sharing theories to help fill in the gaps — or not.

You: Do I need to watch the original Twin Peaks to get this one.
Me: Friend I'm not even sure it would help.

A Twin Peaks newb wasn’t that far behind the fanboys when Showtime aired the first two hours of Twin Peaks: The Return on Sunday. Episodes 3 and 4 went up on Showtime Anytime right after, but the first two already provide a lot to unpack, so let’s start there.

Anyone alive in the ‘90s already knows the basics even if they never watched it: Agent Cooper (Kyle MacLachlan) went to Twin Peaks to solve the murder of Laura Palmer (Sheryl Lee). The kooky town had a Log Lady (Catherine E. Coulson), who shares messages from her log; owls; a pale horse; and some damn fine coffee and cherry pie.

SPOILER WARNING: THE FOLLOWING INCLUDES PLOT DETAILS FROM EPISODES 1 and 2 OF TWIN PEAKS: THE RETURN

After 25 years, Lynch and co-creator Mark Frost upended even the few basic things Twin Peaks thought they could count on. The Agent Cooper we first meet (after a brief intro in the Black Lodge, that weird red-curtained place with stripey floors), now has hair like Nicolas Cage in Con Air — and a temper like Nicolas Cage in everything else!

Never seen Twin Peaks, but if Kyle McLaughlin is gonna cosplay as Tommy Wiseau, I have no choice but to check it out pic.twitter.com/tZQvMiiQ6L

You vs. the guy she told you not to worry about #TwinPeaks pic.twitter.com/Vj9bFT9NB5

It's like Twin Peaks meets Showgirls. My lord, no. #TwinPeaks

It soon became clear that this had something to do with BOB, an evil spirit from the Black Lodge who possessed Leland Palmer (Ray Wise) in the original series. By the end of part 2, long-haired Cooper was refusing to go back to the Black Lodge, where mysterious callers were trying to get back to BOB. Some fans were onto BOB much earlier.

So that was BOB, right? #TwinPeaks

Fortunately, good old clean-cut Cooper was still there in the Black Lodge. That doesn’t look like a fun place to spend 25 years. Somebody get that man some coffee and pie!

Dale has been stuck in this Lodge for over 25 years? Poor guy! #FreeDaleCooper #twinpeaks

At least he got to see Laura Palmer again.

Laura Palmer can't come back from the dead. Her soul could be in limbo. #TwinPeaks

So in the Black Lodge, a dead person can age 25 years. Or at least some bright white light can wear a Laura Palmer face!

Laura Palmer has a real glow about her, doesn't she? #TwinPeaks

The horse appears briefly too.

The arm is now a talking wad of gum in a tree. #TwinPeaks

The evolution of the arm?! Huh? Confused but knowing Twin Peaks I will eventually get it…sort of. 🤣🤣 #TwinPeaks

So yes, for double Kyle MacLachlan, and just to see how these trippy visuals develop, whether they’re explained or not, keep watching Twin Peaks.

I totally know the log lady! It’s still Catherine E. Coulson, who passed away in 2015, so she must have filmed scenes before she died. She’s got breathing tubes in her nose, which could have been her reality near the end of life, but it was very touching that Lynch was able to include her.

Is it just me or did that damn log grow bigger. #twinpeaks #TwinPeaksPremiere

the log lady is making me so sad. i love her and appreciate her and her log #twinpeaks

Hawk (Michael Horse) was still there to follow the Log’s guidance.

There were plenty of other Twin Peaks regulars a newcomer would be excited to meet for the first time. Lucy (Kimmy Robertson) is still the sheriff’s receptionist, and she filled everyone in that Cooper’s been missing for at least 24 years. 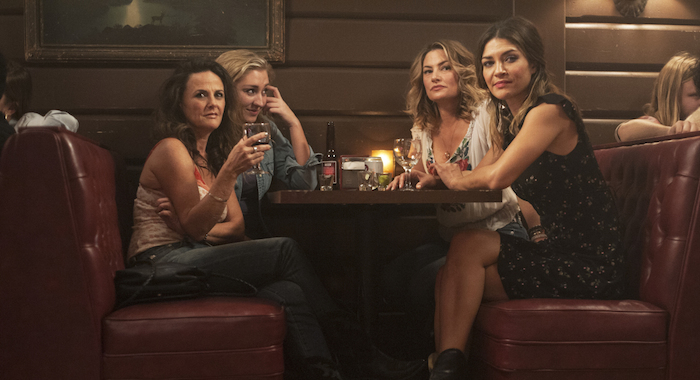 It wasn’t until the last scene in The Bang Bang Bar that Shelly (Madchen Amick) shows up. She’s out with her girlfriends and notices James (James Marshall) eyeing one of her friends.

"James has always been cool". Sorry Shelly but you can't trick us into thinking season 2 didn't happen. #TwinPeaks

James, I had to look up, but he was on the original show too. Shelly says he had a motorcycle accident so he’s quiet now, but if the fans are happy to see him again, so am I.

Jerry (David Patrick Kelly) is clearly a fan favorite, so can’t wait to see more of him.

WHAT THE HELL HAPPENED TO JERRY #twinpeaks

Leland Palmer and Phillip Michael Gerard (Al Strobel) are also in the Black Lodge with Cooper. The Giant (Carel Struycken) is now officially credited as “???????,” so people we thought we knew are getting more vague!

The Glass Box of Doom

Of course there are totally new characters and bizarre scenarios, so everyone is in the same boat watching the new storylines unfold. That science experiment in New York City where a college student (Ben Rosenfield) is watching a glass box to see if anything appears becomes the second most graphic scene in the show when a figure appears in the box, then busts out and kills both the college student and the flirtatious Tracy (Madeline Zima).

Um, so, the Red Wedding just happened on #TwinPeaks.

consequences of pre-marital sex: an alien demon will jump out from a glass box and cut you both until you are a bloody corpse #twinpeaks

Remember that time in #twinpeaks when the being broke out of the glass block and scraped a couple of naked teens to death?

By the end of the second hour, Cooper has appeared in the glass box, but it was while the observer was out in the hall with Tracy. So did Cooper come back and kill them, or was that BOB? Or something else? Definitely going to have to watch the series to find out. 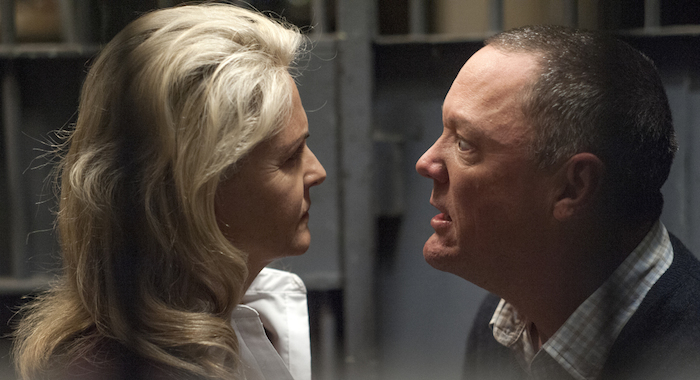 We met a lot of new characters, some briefly like Beverly (Ashley Judd) and Chantal Hutchens (Jennifer Jason Leigh). It looks like Bill Hastings (Mathew Lillard) is the main suspect in a new murder. A body was found in an apartment in Buckhorn, South Dakota, in what was the most graphic scene.

Since she was missing an eye, some fans thought she was someone familiar, but they were wrong.

That dead woman reminds me of Nadine with the eye patch, because you know, her eye is GONE. #TwinPeaks

The body was Ruth Davenport, a librarian. Bill’s fingerprints are all over her apartment and his only alibi is an affair he was having. But his wife Phyllis (Cornelia Guest) is cheating on him too. Phyllis is letting Bill go down for this, but Evil Cooper kills her before we got much of a chance to know her.

So he's cheating with the assistant. But how did his prints get all over Ruth's place?? #twinpeaks

And then, two cells over from Bill, a black figure dematerializes from the cell. If Lillard’s unhinged performance and the murder mystery werent’ enough (they were), you’ve got to keep watching to find out what that was.This sure ain’t Law & Order.

Mr. Lynch, You Have Our Attention

Low-fi visual effects punctuate the twisted nature of the Twin Peaks story, and there are trails of breadcrumbs dropped that we’ll also have to follow, like Evil Cooper’s Ace of Not Quite Spades. What’s that about?

even the playing card is scary. HOW DAVID LYNCH HOWW #TwinPeaks

And there are plenty of cast members who have not yet appeared. So we can look forward to finding out who Robert Knepper, Jim Belushi, David Koechner, Trent Reznor, and Amanda Seyfried are going to play. One guess is that Seyfried’s character is Shelly’s daughter.

So yes, here’s one viewer who got sucked into David Lynch’s trippy world tonight and who’s going to watch to the end, and maybe even go back and catch up on the original finally.