12 contestants strut their stuff for the judges in a glittery ― naturally ― season opener. 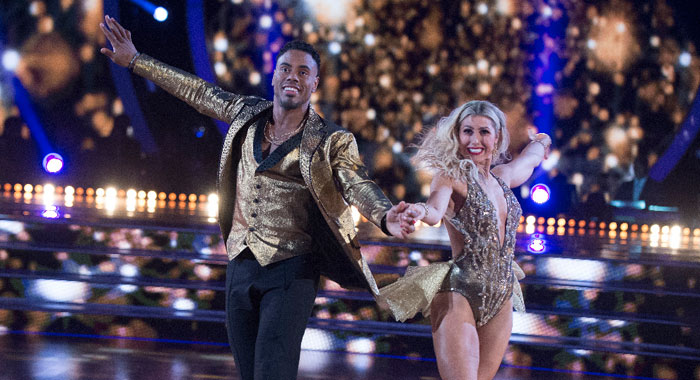 And we’re off to the dance floor! Dancing with the Stars’ season 24 debut — and the show’s 400th episode — aired Monday, as the 12 contestants had a free week to shine and show their stuff to the judges.

Still, there were three who really stood out, including former Glee star Heather Morris, also a professional dancer, who waltzed beautifully with partner Maksim Chmerkovskiy; NFL player Rashad Jennings (pictured above), who really showed off some amazing moves with partner Emma Slater; and the top scorer of the evening, Olympic gymnastics champ Simone Biles, who tangoed like a pro with partner Sasha Farber.

Below are the top five performances.

The Fifth Harmony singer had a great start. Judge Len Goodman argued with Julianne Hough, who loved how she set tone. Judge Bruno Tonioli simply stated, “‘Baby I’m Worth It’ and oh yeah, she gave it to me.”

Amazing @NormaniKordei !!! So excited to watch u all season #Dwts @DancingABC

Even though it’s been years since she competed on the ice, Kerrigan still had it. Tonioli: “Nothing frozen about that, that’s for sure. Like a cashmere shawl.” Goodman: “You are a pairing with great promise.”

Had a blast in my first #DWTS performance with @artemchigvintse. Thank you all for the support and here's to many more! @DancingABC pic.twitter.com/9PDmg0gFg1

These two were simply magic. Hough made sure to mention that although Morris has been a professional dancer, she’s never ballroom danced, so yeah, OK, but still…

almost show time, thank you guys for all the support so far! 🔥 #TeamMaksimumHeat #DWTS #DWTS24 @DancingABC

The NFL player got his groove on big time. Hough called it the “best dance of the night!” The others then argued with Goodman, who started to nitpick, but he then said it was well done.

I'd like to publicly declare my love for rashad jennings #dwts pic.twitter.com/JWDCmxOtAx

Wow. Well, looks like Morris and Jennings might have serious competition. Goodman called this one the dance of the night – and the judges totally agreed. Biles had amazing poise and incredible technique.

So excited for @SashaFarber & @Simone_Biles tonight and this season. Wish I was there in person but I'm cheering you on across the country!!

Tune in next week to see which dancing duo is booted off first.

Dancing with the Stars airs Mondays on ABC