Comedy, Music, and Politics Collide for Lea Michele in New Series The Mayor

How her new character is similar to and different from Rachel Berry and why this series is the perfect partner for black-ish. 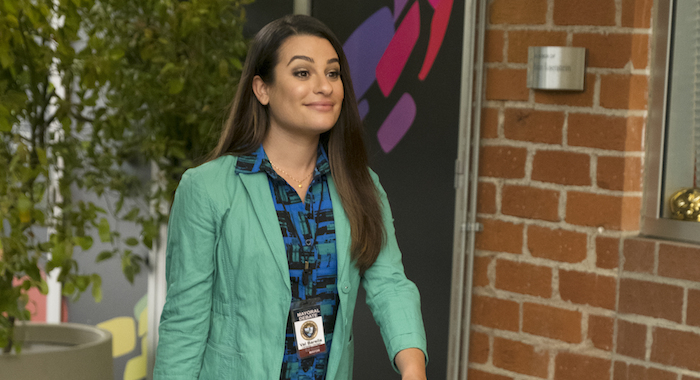 If Broadway didn’t work out for Rachel Berry or if Hester Ulrich had not gone psycho, either of Lea Michele’s previous TV characters might have ended up like her new one. On ABC’s The Mayor, Michele’s Valentina Barella is a campaign manager who offers to work for an opponent. She’s very Type A, but that’s just what Courtney Rose (Brandon Michael Hall) needs.

See, Courtney didn’t even really want to be mayor. He’s a struggling rapper, and he only ran for office to generate some hype for his music. He won over the populace at a debate where he schooled a stereotypical stodgy politician (David Spade) on what the community really needs. Then he actually won the election. The people have spoken. With Valentina’s help, Courtney just might be able to give back to his hometown while he keeps rapping (with original music from Hamilton‘s Daveed Diggs).

Michele spoke with Rotten Tomatoes before the premiere of The Mayor. 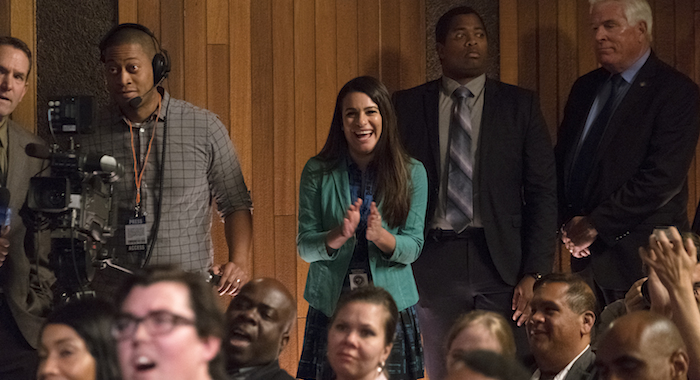 Fred Topel for Rotten Tomatoes: Were you ready for a new show right after Scream Queens ended? Was taking a break ever an option?

Lea Michele: A break doesn’t really work for me. I kind of really like to be busy, so I was definitely looking for something to do. I was also at the same time working on my second album and releasing that. I knew that once I’d released the album and done a couple of concert tours that I wanted to jump into another television show. I was actually really looking for a great comedy, hopefully something 30 minutes that I believed in. I think she’s an incredible character, and I’m so excited to be on another television show.

RT: Was the rapid pace of this comedy natural to you?

Michele: Definitely the character’s drive and ambition, she’s very cutthroat. Playing Rachel Berry for such a long time, I feel like that’s just an aspect of a layer of a character that I play quite well. But I love the integration of music as well, and I do believe that the storyline is very inspirational and quite appropriate for our world right now.

RT: Is there any similarity or parallel between choreographing musical numbers and performing comedy?

Michele: There’s definitely a physical aspect to comedy that you have to be comfortable with that’s kind of like a dance. I grew up watching Gilda Radner on SNL playing Roseanne Roseannadanna. She was just so physically uninhibited. I think you have to be comfortable in your movement as a comedic actor, sort of like dancing. I’m not even saying I’m the best dancer. I’m sort of not even that great, but there’s definitely a connection and a formula to each in a way.

RT: When Valentina says “she asked with a tone,” like she’s narrating her own sarcasm, does that really give you insight into what kind of person she is?

Michele: I mean, she does things like that quite often. She’s incredibly smart. She’s very politically savvy. I’ve had to sort of brush up on my legal jargon, but I really connected with her from the beginning, and I knew that it would be a character that I could play quite naturally.

Michele: I did some research. I spoke with a couple of women that actually worked with Obama, just to see what it’s like to be a woman in the political world, but also campaign for someone that maybe at the beginning they had to get more people on board and then bring him to such a great level of success. I watched tons of movies like The War Room and Primary Colors. I read Hardball, I read The Prince. I tried to do my research and [creator] Jeremy Bronson was actually very, very, very helpful just giving me a good direction of what he thought would be best for me to research and study. 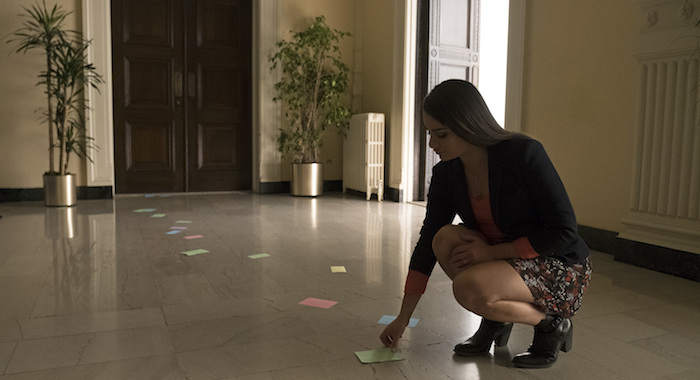 RT: Did you take any mannerisms or little details from those women?

Michele: [Laughs] I think for me it’s just really about making each character that I play different. I think that the drive that this character has is similar in a sense to Rachel Berry, so the task is to create different body language and different physical characteristics and style to differentiate each character and make them unique. So she definitely has her own style and her own flair.

Michele: I think that we definitely plan on having the show be incredibly lighthearted and also have a great music background, but also tackle important issues but in a really thoughtful and sensitive way. I think that black-ish is a great example. Obviously, we’re airing after black-ish Tuesday night and they’ve dealt with very sensitive subject matters like gun control, the N word and they did it in a really smart but yet they use the humor to drive the message. I think that we really look up to that show and applaud that show so I know that we’re going to probably do the same thing. 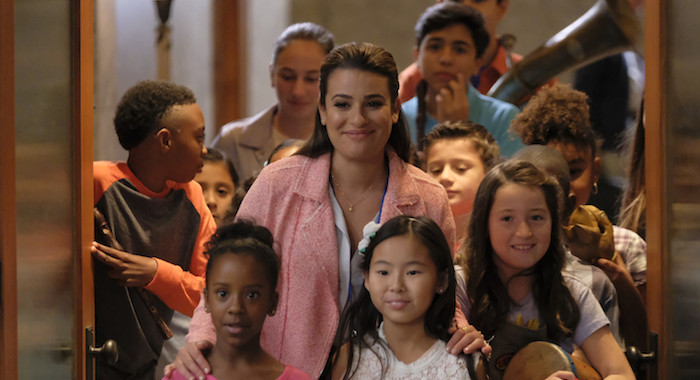 RT: Do you have any hopes that a show like The Mayor can motivate people to get more involved?

Michele: Absolutely, I hope so. I feel that it’s so important right now that you fight for what it is that you believe in, whatever that might be. Just to get kids talking about politics but in a cool, approachable way would be absolutely amazing.

RT: Is rap a new musical style for you?

Michele: I don’t know if you saw episode two of Glee when I sang “Push It” by Salt-N-Pepa. That was definitely one of my best performances. Yeah, you know, I’ve not had to do any rap or hip-hop quite yet. I’m just grateful that they’ll have me on this show. What these boys can do, especially Brandon Michael Hall, he is such a star and an incredibly gifted actor. He just was on Search Party, one of my new favorite shows. He graduated from Juilliard and now he’s on this show. He’s so talented, but also he raps. 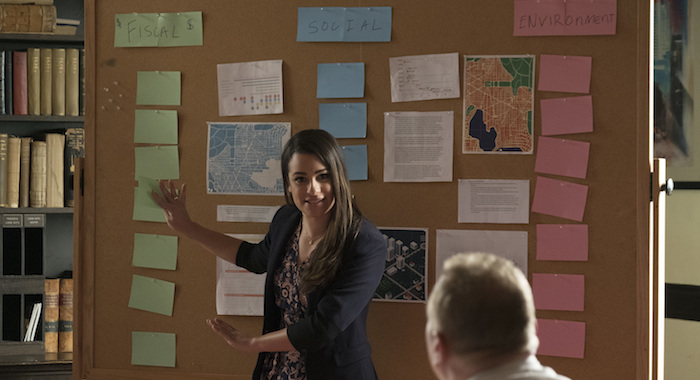 RT: Would it be really out of character for Valentina to sing?

Michele: I think it would be out of character for her because I think that that’s the last thing on her mind. I don’t think that the show will go in that direction, but obviously, like I said, they’re an incredible, talented group of writers, so I’m on board for whatever they would like.

RT: It’s funny when Courtney won’t listen to Valentina, but does it get frustrating when she keeps asking him to be responsible?

Michele: I don’t think she wants to have to parent him. I think she really wants for him to see these things on his own. One of my favorite lines in the show is, “I’m the brains and he’s the heart.” When we come together we work so well. I really think that she does believe in him and she knows that he has it in him. It’s just a matter of getting him to see it or not, but that’s the journey that they’re going to take together. 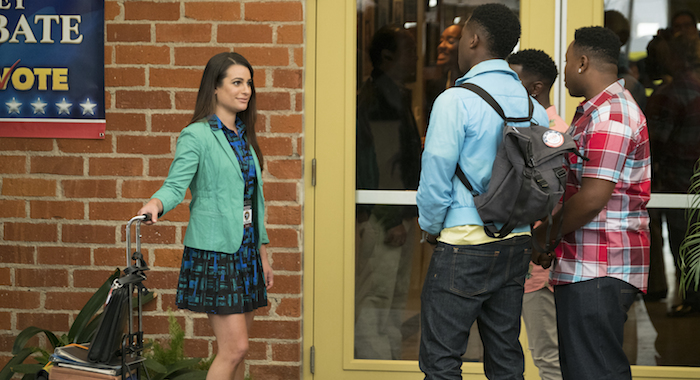 RT: Did you and Brandon share any music playlists with each other?

Michele: I actually need to get the boys to send me some stuff. What were we listening to the other day? We want to go to a couple of concerts, me and Marcel [Spears], Bernard [David Jones] and Brandon have all been talking about going to a couple concerts together. I think that would be fun.

RT: Who would you go see?

RT: What playlist would you give them to listen to?

Michele: The best of Broadway, because I know that that’s absolutely what they would love to listen to. [Laughs]

RT: Is Valentina out of her element with these guys?

Michele: She’s definitely out of her element, but I don’t think that there is a challenge that she cannot take on headfirst. So I think that she has to do damage control, and she’s always sort of on guard making sure that they’re not having more fun than they are actually getting any work done. But again, like I said, I think that underneath it all, she kind of likes it. I think she likes hanging out with them. I don’t think she’ll ever admit it, but I think she’s actually really having a lot of fun. So she’s certainly out of her element with them but weirdly fits in. She’s like a sister to these three brothers that she never expected to have. They work incredibly well together. 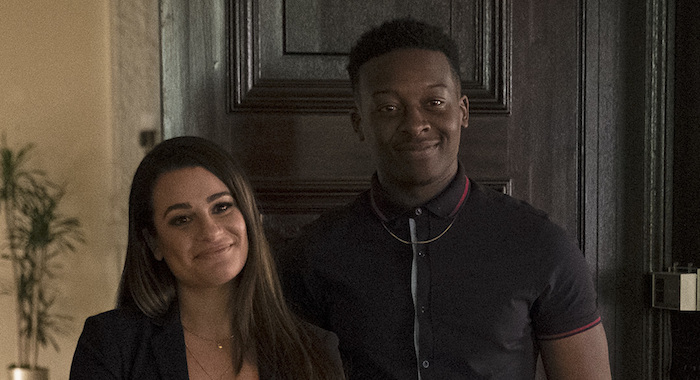 RT: Can she learn some skills from them that will be useful in politics?

Michele: Maybe. I definitely think that her eyes were opened immediately to how Courtney was so passionate about what he believed in and his passion came from such a true place, so I think that was very inspiring. They’re very outside of the box in their thinking, so that’s something I think she can also learn from. Again, like I mentioned, it’s the heart and the brain. They come together and they learn from each other and they work incredibly well together.