The Bling Ring, Debbie Ocean, And Why We Can't Help But Love Cinema's Designer Thieves

This feature is by Catherine Young, the current USC Annenberg-Rotten Tomatoes Digital Innovation and Entertainment Criticism fellow, a partnership with the USC Annenberg School for Communication and Journalism. Cate is writing on the representation of women in film; read her piece, What Ever Happened To Cinema’s Virginal Final Girl?, here.

Over the last decade of cinema, audiences have shown an affection for women who steal – especially when they look good doing it. Since 2010, there’s been a number of big-budget, studio-released, female-fronted films that focus on women and girls with a taste for luxury and a penchant for crime. Sofia Coppola’s The Bling Ring showed the appeal of empty consumerism and label addiction, Paul Feig’s A Simple Favor gave us style and cunning wrapped up in a sharp three-piece suit, and Ocean’s 8 brought eight actresses together for the jewel heist of a lifetime. That’s not to mention the stylish, pole-dancing heroes of Hustlers, the bad girls of Spring Breakers, or the hilariously mismatched partners of The Hustle. And all these films have been successful, making bank at the box office, or becoming cult hits, and inspiring memes and followings. 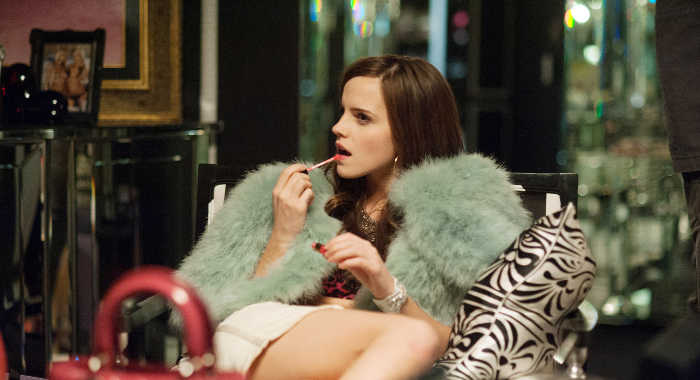 So what exactly makes this type of anti-heroine – whom we’ll call The Designer Thief – so compelling? After all, even though they’re fun to watch, it would probably be a lot less fun to fall victim to one of their schemes.

Simply put? She’s got the look.

Whether it’s stealing for fun or stealing for profit, a major draw of the Designer Thief is the way she is depicted. The highly stylized treatment of these characters transforms them from figures we judge into figures of envy. They are successful thieves, able to live in beautiful homes and swan around in beautiful clothes, and through them we can imagine what our lives would be like if we also had access to unfettered wealth. These criminal characters permit us to enjoy the thrill of their ill-gotten gains, minus the guilt or responsibility of actually committing any crimes. We get a taste of the high life, without having to do the nasty work to get there. The trope of the Designer Thief proliferates because it lets us into a world most of us will never experience. 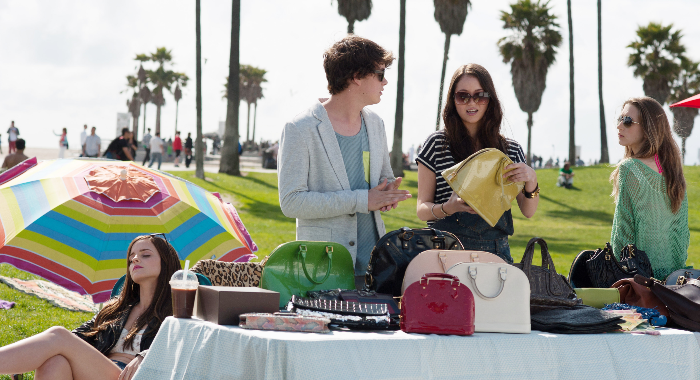 Sofia Coppola’s 2013 film The Bling Ring, based on a true story, is all about conspicuous consumption. In it, a band of idle, celebrity-obsessed teens becomes fixated on the lives and lifestyles of the socialites filling the pages of tabloid magazines and websites like TMZ. Paris Hilton, Lindsay Lohan, and The Hills’ Audrina Patridge are just a few of the women who are unlucky enough to be the subjects of the teens’ materialistic devotion. That devotion turns criminal when the group decides to relieve the women of their beautiful things by breaking into their houses and stealing them.

As their scores get bigger and riskier – they repeatedly hit the same houses and are eventually caught on security cameras – the members of the Bling Ring are almost compelled to continue stealing. They pilfer designer dresses and expensive bags to suit their own tastes, or to resell for cash, and the film takes great pains to show the teens sincerely indulging in their newfound access to this wealth. They know and understand not just the value of the objects they steal, but the social cache that comes with the labels stitched inside them. “Look at her sunglasses – these are Alexander McQueen!” one girl exclaims during an early heist at Hilton’s house. The item itself is immaterial, but the name has power. Dressing in their stolen designer gear, the Designer Thieves of The Bling Ring inherit some measure of these socialites’ mystique and allure, and themselves become mysterious and alluring within their peer group. 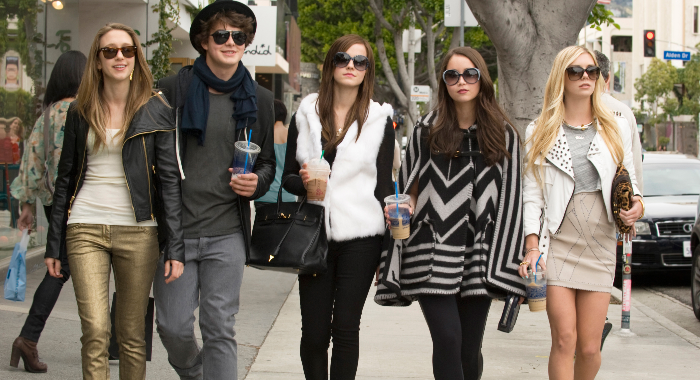 As moderately well-off children in and around Beverly Hills, what the teens of the Bling Ring really desired – in real life and on screen – was the lifestyle they saw depicted in the press by the models and socialites they envied. The things were merely a portal to the sense of superiority they were chasing. Crime was a means to an end. The small group of (largely) women did not steal to fund projects or pay bills, but simply to accumulate things.

And yet, we don’t judge the Ring too harshly – because we as an audience can be just like them: desperately aspiring for more. The Bling Ring’s actions allow us as viewers a perverse kind of voyeurism. We too get to enjoy playing in the closets of the rich and the famous – and even judge them. (These are not victimless crimes… but have you seen the victims?!) It’s hard to justify the conspicuous consumption of these stars in the first place. Who truly needs an entire closet filled with expensive Birkin bags? Seeing these young women play dress-up in the riches they had not earned, for fun, and even get away with it for a time, permits us all to experience our own illicit thrill. At the time, some criticized Coppola for taking aim at rampant consumerism, while seeming to also celebrate it. Perhaps that was entirely the point. 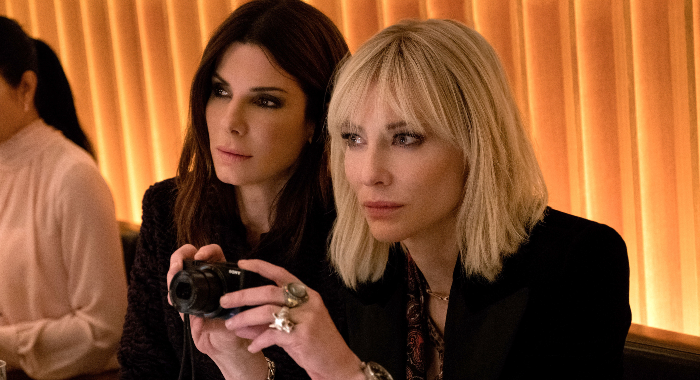 Ocean’s 8 is an all-female reboot of the Steven Soderbergh-helmed Ocean’s heist trilogy. The film is one long jewel heist – it’s almost as if the Bling Ring grew up, but never left those walk-in closets. The movie presents its cast of heavy hitters like Sandra Bullock, Cate Blanchett, and Rihanna – women well-known for their extraordinary glamour offscreen – as low-level, working-class grifters who combine their powers for one last score.

Ocean’s 8 leans hard into luxury. The movie begins with Debbie Ocean (Bullock) leaving prison. Rather than reaching out to friends or family, her first order of business is to run a quick scam on a department store to get makeup and clothing, then continue her streak at a nearby luxury hotel by swindling her way into someone else’s just-vacated room. Within hours of leaving the state’s custody, Debbie already has access to room service on someone else’s tab and all the fancy clothing she wants. The film’s introduction is a distillation of the designer thief in action, and we cheer her on for getting her way. 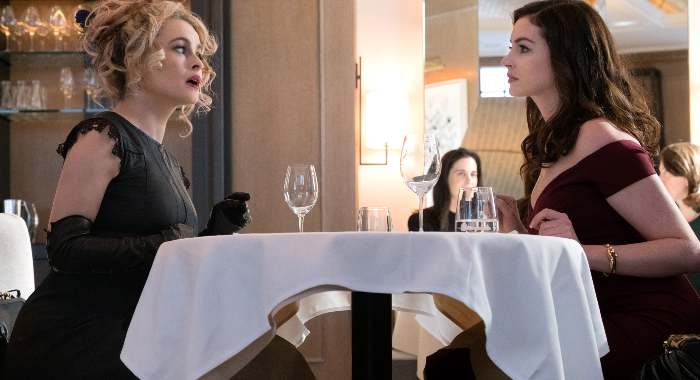 The rest of the film continues the gambit. Not only do the women aim to steal a $150 million diamond necklace, but the theft itself takes place at the annual Costume Institute Gala. Colloquially known as The Met Ball, the event is widely considered to be one of the most lavish and exclusive social events in the world. Each year, designers gather with their celebrity guests to show off extravagant fashion centered on an annual theme. Rihanna, who also stars in the film, is regularly one of the Gala’s most highly anticipated guests, and co-chaired the event the same year the film was released.

By choosing this location for their heist, the movie places the women’s theft squarely within the realm of luxury and idolized aesthetics. While the men of the original Ocean’s trilogy robbed casinos – high-stakes venues largely controlled by masculine power – these women rob an event whose most high-profile presence is the legacy editor of a women’s fashion magazine. The focus of their heist, the Cartier Toussaint necklace, is the embodiment of shiny, sparkly beauty, and at the end of the film, we find out it isn’t the only thing they took. Our grown-up Bling Ring also steals all the jewelry from the rest of the Institute’s displays, too. 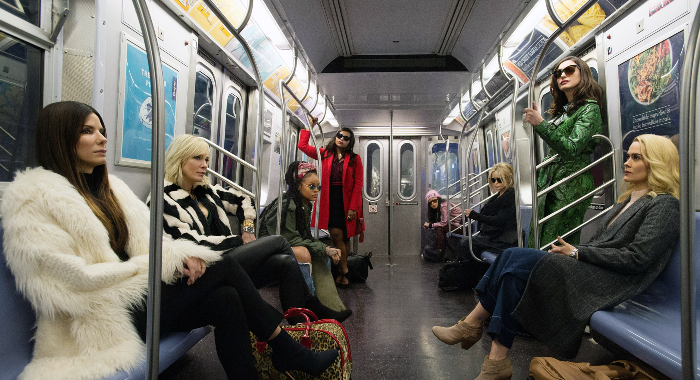 In keeping with the highly stylized venue of their heist, the women’s costumes are also extremely glamorous. The costuming serves a dual purpose: in the story, it allows them to blend in at the Met Gala; for the audience it gives us a visual thrill – and options for the Designer Thief we most identify with. The cast is packed with famous actresses spanning several generations, all of them with highly distinct visual personalities made clear through costume choices. The red ball gown Rihanna wears as the con reaches its peaks is a stunner that dazzles viewers and allows the character to fit in. Blanchett’s stylish three-piece suits give her an enviable swagger and clear authority that inform her place in the hierarchy of the group and give hints about her relationship to Bullock’s Debbie. Helena Bonham Carter’s dizzy piles of clothing tell us instantly why her fashion company has fallen out of favor, and why she needs the money, but it also give us an “alternative girl” style icon to latch onto. For each character, her wardrobe is set dressing for the type of thief they become, the motivations for their theft and their participation in this world. For each audience member, it’s a chance to once again revel in luxury and style – and in this case we get eight distinct styles to choose from.

We find another version of the Designer Thief in Paul Feig’s 2018 comedy-thriller, A Simple Favor. In the film, Emily Nelson (Blake Lively) is an inscrutable PR director for a fashion company, who stands out for her stylish and immaculately tailored suits (and skill with a cocktail shaker). In fact, the various suits Lively wears in the film (and on the film’s press tour) became an obsession for some fans, with Pinterest and Instagram posts and accounts devoted to her wardrobe. But those same designer suits are eventually revealed to be nothing more than a series of individual pieces superficially put together to resemble a tailored pantsuit. And like her seemingly perfect uniform, Emily is is ultimately revealed all style and little substance. 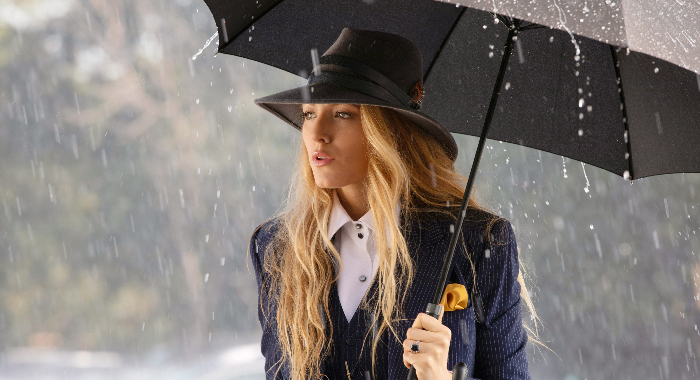 Emily disappears in the first act, presumed kidnapped or murdered. But Feig’s twisty plot eventually reveals she is the film’s villain, having murdered her drug-addicted twin sister before going into hiding in order to collect on her own life insurance. We learn also that her husband is a failed novelist whom she married in the hopes of sharing in his success, and her gorgeous house is a relic to all the money they have squandered in their marriage. The many damaged people she has left in her wake all have stories of the way she took advantage of and leached off them, only moving on when they had nothing left to give.

And yet despite being the explicit villain of the story, it is Emily who has become the cult favorite of Feig’s movie. Her manipulation and murder are the selling point of the film’s appeal rather than a reason to reject the character, because she does it all with flair and finesse – and while looking great. Lively imbues the character with a forceful confidence that – contrasted with Anna Kendrick’s Stephanie‘s suffocating timidity – allows viewers to find a foothold into that ever elusive quality: “likability.” With her pushiness, style, and uncomfortable frankness, Emily leaves the film’s biggest impression, despite disappearing for much of its run time. In the end, despite her significant flaws, Emily is the character the audience most wants to be. 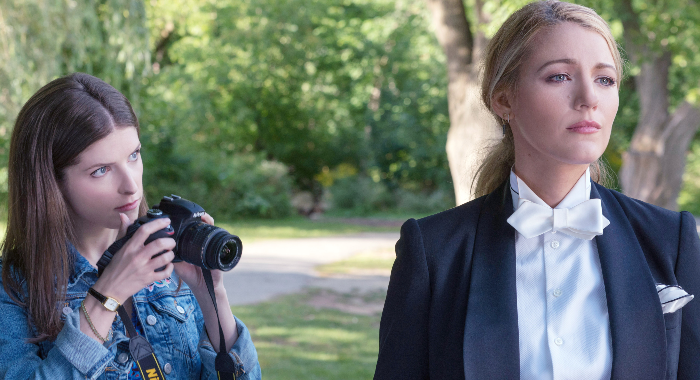 There will likely always be a market in film for women like the Designer Thief. The archetype allows us to hold multiple ideas at once without having to examine the ways they conflict with each other or call each other into question. Historically in film, men steal for power and wealth (Fast Five, The Italian Job, Bandits), but women steal for the promise of comfort and stability. The Designer Thief is a product of our contrasting ideas about what we want women to be and do and how we’d like to see them when we know we’ll remain safe from the effects of their choices. When it comes down to it, the Designer Thief allows us to live vicariously through her by seeing women embrace the opulence and wealth they didn’t earn. Isn’t it fun to imagine a life of luxury without the possibility of a life sentence?