"We imagine ourselves as having super powers now, because the worst thing that can happen is the thing that already happened," says star Andy Samberg.

Brooklyn Nine-Nine is going to look very different when it returns to TV on January 10, premiering on its new network, NBC, after Fox canceled the sitcom last May.

“One episode is black and white,” revealed star Chelsea Peretti on a December visit to the show’s Los Angeles set. “It’s no words. It’s opera music and subtitles.”

They are joking, of course. Probably. In fact, the rest of their costars told Rotten Tomatoes that their series is pretty much exactly the same. And that’s the way fans want it. But the cast and writers are able to take bigger risks now that the show has come back from the dead.

“In some ways we imagine ourselves as having super powers now, because the worst thing that can happen is the thing that already happened, so we’re taking a lot of big swings,” leading man Andy Samberg, aka Det. Jake Peralta, promised.

Joked creator Dan Goor: “A lot of big swings — an entire episode in Japanese. That would be so cool, actually…to do like an anime version of our show. … I think that one thing we really wanted to do this season was more of this sort of experimental or different — experimental might be too highfalutin, but of the out-of-form episodes that we started doing in seasons four and five. So it’s things like ‘The Box,’ or issues episodes like ‘Moo Moo.’ We wanted to do more of those and to challenge ourselves formally, and I think we felt empowered to do that kind of thing because we are living on borrowed time.”

What exactly will that entail? Read on to find out what to expect from the sixth season of Brooklyn Nine-Nine. 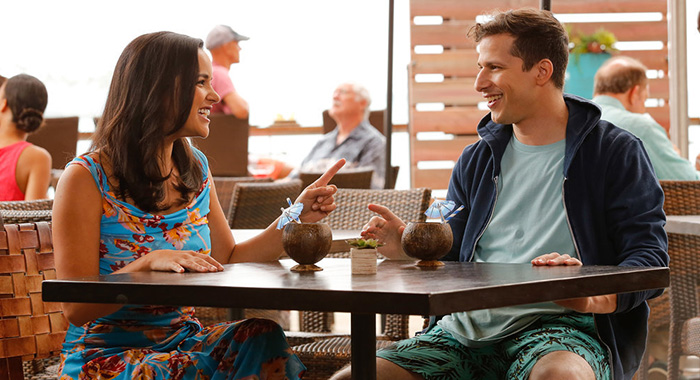 NBC’s promos for the new season have focused heavily on Amy (Fumero) and Jake’s relationship, and the season premiere will see the duo on their long-awaited honeymoon. Much like their wedding, however, it doesn’t necessarily go to plan when someone else from the Nine-Nine tags along — and it’s not who you’d expect.

“They’re not letting me say anything,” Fumero said, but know that “their honeymoon won’t be the honeymoon they think it’s going to be.”

After they return, they’ll slip right back into their regular lives.

“Our philosophy with Jake and Amy was just to continue doing what we had done, which was not to force drama, not to force relationship moments before they felt natural, and to take advantage of the fact that I think that there’s a comedy dynamic between Jake and Amy that exists independently of the romantic dynamic between them,” Goor explained. “We can put them on work stories together and office stories together that don’t have to have a romantic through line to them because there’s the odd couple aspect of them.”

One reason Jake and Amy work as a couple, Fumero told Rotten Tomatoes, is because they’re living their own lives.

“When we first started the relationship and also [decided] that we weren’t going to do a will they/won’t they for too long and just actually explore them as a couple that does work, in their own weird way, when it’s received well — it’s just a big relief and a huge compliment,” she said.

As costar Peretti pointed out, “think how many couples are so limited in so many movies and shows, but especially in movies, where it’s just like, the female is this thing that’s there, and then the guy is doing all this interesting stuff. The beauty of [Jake and Amy] is that they’re friends and that’s how a lot of people’s marriages are now. They both have passions, and they’re both friends.” 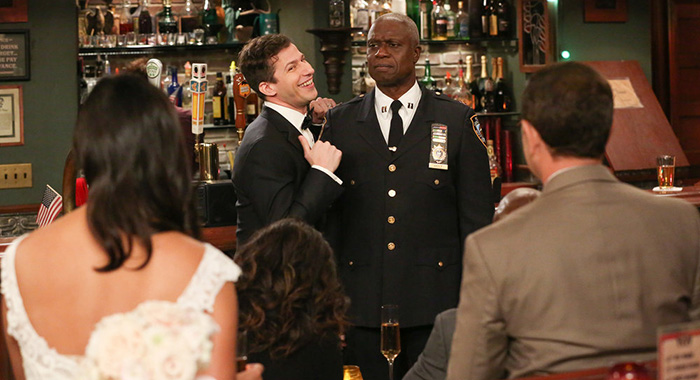 The season 5 finale ended on a cliffhanger, with Captain Holt (Andre Braugher) finding out whether or not he got the commissioner job. The premiere will pick up right where that episode left off, and the rest of the half-hour will see Holt dealing with the results.

Braugher was tight-lipped about Holt’s fate, however, giving a very diplomatic Holt-like answer when asked about what happens to his character.

“The premiere episode is well-written and I think very funny, and so I was very happy to be a part of that,” he said. 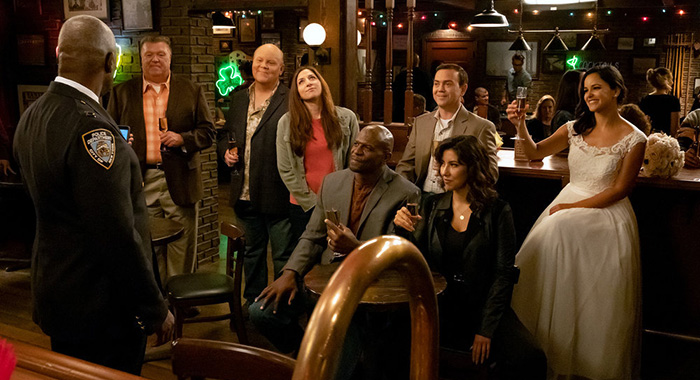 The second episode of the season flashes back to the early days of Hitchcock’s (Dirk Blocker) and Scully’s (Joel McKinnon Miller) careers.

“This is my favorite because Joel and Dirk from the get-go have been underrated, I think, and are such fan favorites, and the origin story is so funny to me,” said Joe Lo Truglio, a.k.a. Jake’s BFF Charles Boyle. “It’s so good. The fans are going to love it.”

“It was nice to show Amy’s vulnerable side, which we don’t get to see a lot,” Fumero said. “For me, it was tough, because I and every woman I know have stories, have experiences, have things that have happened to us. That’s a little bit of what we’re telling in that episode, and those lines were hard to say because I’ve said them in real life. Stuff like this has happened to me and every woman I know.”

Beatriz said she has a newfound appreciation for all the work television directors to do, but she’s grateful she had the opportunity to do it — and in such an impactful episode.

“It’s not like directing a film because directing a film is just your vision and what you want to do,” she explained. On TV, “you have to hit all these marks someone else has already created for you and you have to make the episode fit into a world. And I’m lucky because I have been in this world for five years, so I know what the world is. Thinking about doing that on another show is very overwhelming, but also exciting. I want to do it.”

Other episodes will feature another Halloween heist, the return of Craig Robinson’s Pontiac Bandit (whose “world gets a little bigger,” revealed Lo Truglio), and a mysteriously bloody Hitchcock.

“Hitchcock will be bleeding in a few episodes, which is always inexplicable. But there will be blood,” star Terry Crews said. 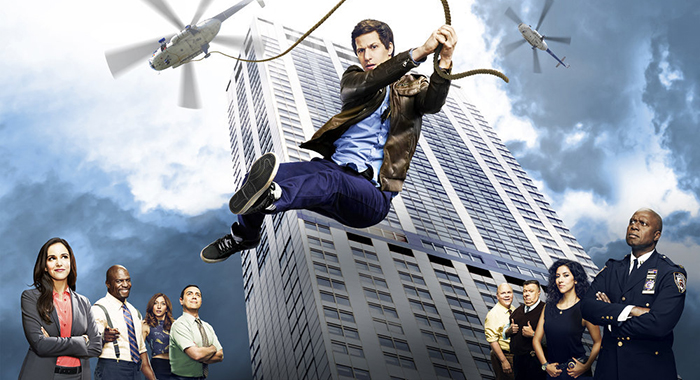 One thing the characters weren’t able to do on Fox is swear. But NBC comes with an entirely different standards and practices department, and apparently Brooklyn Nine-Nine’s new network is totally cool with cursing (which will be bleeped, of course), and nudity (which will be blurred).

“Fox had a no bleeping policy and a no pixellation policy, and NBC has bleeps and it’s fun,” Goor said.

Said Crews, “I had one where I’m ashamed. I’m actually very ashamed. Oh my God, it was so jarring. Everybody had to regroup for five minutes.”

Lo Truglio and Fumero confirmed the shocking dialogue, which will appear — bleeped — in a later episode.

“We couldn’t believe it, because Terry Crews does not talk like that,” Lo Truglio said.

Said Fumero, “it literally shocked me, and I didn’t know what to say. He was so dirty, but it was so satisfying to hear Terry say it.”

Blocker and McKinnon Miller were especially worried that the new nudity policy would affect their characters the most.

“I scared me a lot when I heard that [we could have nudity], because they’ve had me do so much stuff without my shirt on,” said Blocker. “I’m thinking, ‘What else they going to have me take off?’”

Added McKinnon Miller, “Every week I prayed that we’re not in a bathhouse or something.” 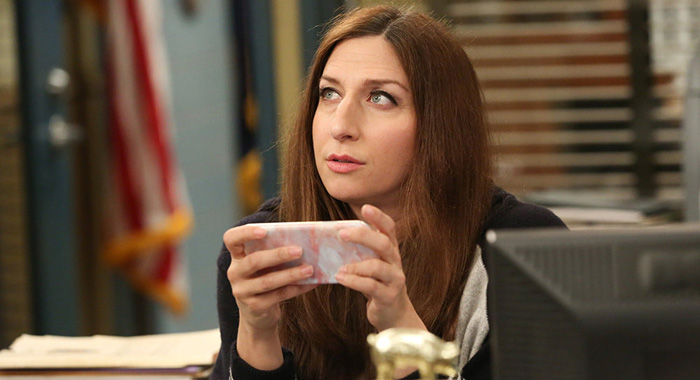 Peretti announced in late 2018 that she’s leaving the series, but Gina Linetti will still be around for several episodes. The actress told Rotten Tomatoes to expect an extremely dramatic and bloody exit for her character.

“My departure is like the Red Wedding,” Peretti joked, referencing one of the most talked-about and brutal moments of HBO’s Game of Thrones.

But there’s “heart and hilarity” in the half-hour, which will likely not be the final time we see the character, Fumero revealed.

“It’s a pretty exciting exit,” Peretti said. “I think you’ll have fun, and you’ll feel your feelings and a good mix of everything you would want from a Gina Linetti exit, and from this family, where there’s clearly so much love there.”

The actress also promised a heartfelt scene with Samberg and said, “I completely go nuts on a dance moment, so there’s definitely a lot to sink your teeth into.”

But, Peretti continued, “There’s nothing casual about it. That doesn’t mean the door is slammed shut, but it’s definitely a big old goodbye.”