Jumanji: Welcome to the Jungle slipped only 27% to an estimated $27M this weekend, bringing its total up to a tremendous $283M. 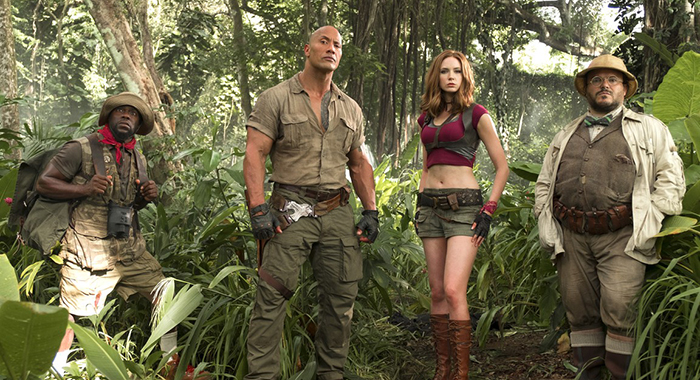 The second frame of 2018 was much like the first with Jumanji: Welcome to the Jungle dominating the charts for another weekend. Newcomers debuted to so-so numbers while award-hopefuls also had mixed results.

With (currently) the seventh best fourth weekend in history, the Sony sequel/reimagining Jumanji: Welcome to the Jungle slipped only 27% to an estimated $27M this weekend, bringing its total up to a tremendous $283M. Opening in China to a whopping $40M, more than Star Wars: The Last Jedi has made in its entire run so far, the international totals for Jumanji jumped to $383M for a worldwide total of $667M with plenty more to come. It’s now also the second highest grossing film for Dwayne ‘The Rock’ Johnson, only behind the $353M of Furious 7. And it could very well pass that too.

Oscar-hopeful The Post expanded nationwide to decent results with an estimated $18.6M from 2,819 theaters for a per screen average of $6,598. Its total now stands at $23M. While it’s almost certainly going to be nominated for a bunch of Oscars next week, the question is whether it’s actually going to win anything and how will that affect whether or not people want to go see it over the next few weeks.

Liam Neeson had the top debut this weekend with the release of The Commuter, another in a long line of late career action films for the star. Opening to an estimated $13.45M from 2,892 theaters, the Lionsgate release had a per screen average of $4,651.

A couple of new films debuted in seventh and eighth places this weekend. The sequel I’m not sure anyone asked for, Paddington 2, opened to an estimated $10.6M from an ultrawide 3,702 playdates for a per screen average of only $2,869. Despite 100% (!) positive reviews on Rotten Tomatoes and an A CinemaScore it appears people just weren’t interested in the talking bear again. Proud Mary debuted just behind the bear with an estimated $10M from 2,125 theaters for a per screen average of $4,706. With a $14M budget this has to be considered a success for Sony.

The singing ladies of Pitch Perfect 3 fell to ninth place this weekend with an estimated $5.6M bringing their cume up to $94.6M. And rounding out the top 10 was Gary Oldman in Darkest Hour which took in an estimated $4.5M bringing its total up to $35.7M.