The final frame of 2017 saw current champ The Last Jedi in the lead, but Jumanji came within striking distance of the number one spot 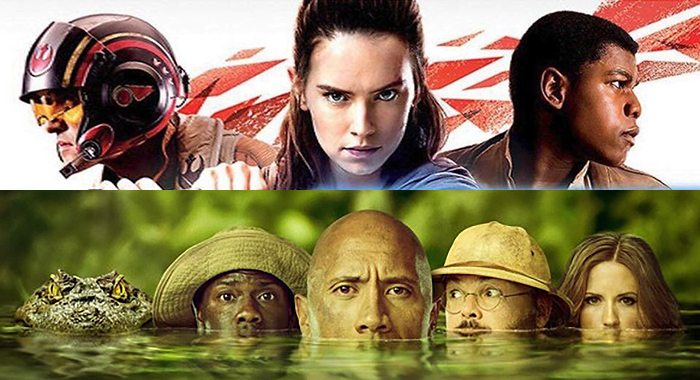 The final frame of 2017 saw current champ Star Wars: The Last Jedi lead the Friday-to-Sunday session, but also witnessed holiday season audiences shifting their attention over to Jumanji: Welcome to the Jungle which came within striking distance of the number one spot. The latest Star Wars episode was always expected to top the box office with ease over the New Year’s frame but moviegoers have been having a wild ride with Jumanji and spreading electric buzz throughout the marketplace. The former suffered the largest decline of any wide release while the latter enjoyed a strong bump up from last weekend.

In fact, daily grosses were about dead even between the two films on both Saturday and Sunday and Sony is actually projecting a higher gross for Jumanji on the New Year’s Day holiday Monday ($16.4M) than Disney is for Jedi ($13.2M). The public must vote with its own dollars, but these two films are clearly commanding the lion’s share of the box office as 2017 closes out. 59% of all ticket sales for the top ten films this weekend went to this pair of hits.

Leading the Friday-to-Sunday weekend period by less than $2M, Last Jedi grossed an estimated $52.4M falling 27% in its third round. Disney has amassed a stellar $517.1M through December 31 surpassing the $504M of its own Beauty and the Beast to become the top grossing domestic hit of 2017. And it still has more to go. Jedi also now sits at number eight on the list of all-time domestic blockbusters on its way past the $600M barrier in the coming weeks.

Compared to the last two Star Wars movies released this same time of year, Last Jedi’s 17-day total is running 30% behind 2015’s The Force Awakens but 22% ahead of Rogue One from last year. It should be noted that the potent New Year’s Day fell during this period for the last two films, but not for this new chapter. The road ahead for The Last Jedi should allow it to finish in the neighborhood of $650M challenging Jurassic World for the all-time number four spot.

Overseas, the new Luke Skywalker saga grossed an estimated $68M this weekend pushing the offshore tally to $523.3M as the domestic/international split has remained steady at about the 50/50 level. The global box office broke the $1 billion mark this weekend and now sits at $1.04 billion with the much awaited China release kicking off this coming Friday.

The overperforming wonder of this holiday season has been Jumanji which was expected to post solid numbers, but has truly been turbo-charged propelled by starpower, great word-of-mouth, and being a highly entertaining package at a time when a broad audience really wants that. The Sony hit grossed an estimated $50.6M this weekend jumping up an impressive 39% from last weekend’s opening frame. With last Sunday being Christmas Eve, a depressed day at the box office, many holdovers saw increases this weekend.

After only 12 days, the action adventure has soared to a stunning $169.9M and is close to smashing the $200M mark. Jumanji will easily become Dwayne Johnson’s top grossing live action film outside of the Fast & Furious franchise. Based on early four-day weekend estimates which include studio projections for Monday’s holiday, Jumanji‘s $67M will edge out the $65.6M of The Last Jedi. Of course, ticket buyers must ultimately spend their time and money their own way and final four-day numbers will be reported on Tuesday, but to even be in the ballpark of beating out Star Wars is a terrific accomplishment.

Sitting in third place again was the comedy sequel Pitch Perfect 3 which dipped 11% from its debut to an estimated $17.8M pushing Universal’s cume to $64.3M. Fox’s Hugh Jackman musical The Greatest Showman surged a stellar 73% to an estimated $15.3M putting the PG-rated crowdpleaser at $48.8M to date.

Ridley Scott’s new kidnapping drama All the Money in the World ranked seventh with an estimated $5.5M in its first weekend of play averaging a mild $2,628 from 2,074 theaters. Sony opened the R-rated film on Christmas Day and has collected $12.6M in its first seven days of release. World gained attention for its last-minute replacement of Christopher Plummer for Kevin Spacey in the key supporting role.

The Winston Churchill film Darkest Hour rose 36% to an estimated $5.3M giving Focus $17.9M so far. The Matt Damon flop Downsizing followed with an estimated $4.6M, down 7%, putting Paramount at $17.1M. Rounding out the top ten was the comedy Father Figures which continued to be ignored taking in an estimated $3.7M, up 13%, leaving Warner Bros. at a measly $12.7M overall.