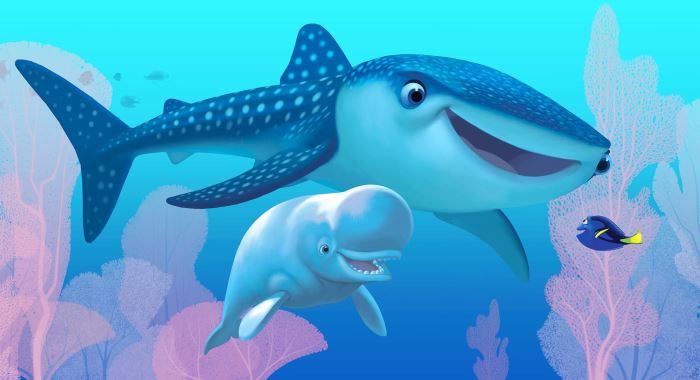 This weekend, Disney and Pixar ruled the box office with ease as the animated smash Finding Dory was once again the most popular film in the land taking in an estimated $73.2M in its second weekend of release. That represented a 46% decline which is good considering the record opening it is coming off of which included massive Thursday pre-shows from last week, and the fact that it is a sequel. Last year’s Pixar entry Inside Out was an original film that dropped 42% and the 2013 sequel Monsters University fell by 45%. All three Pixar movies opened in the second half of June right as schools were letting out for summer vacation.

Through the second weekend, Dory stands tall at $286.6M surpassing the final domestic total of University. On Monday, it will pass Up to become Pixar’s fourth biggest blockbuster ever and on Tuesday it should crack the $300M mark. Eventually the fish tale will beat out Finding Nemo, Inside Out, and Toy Story 3 to become the animation leader’s highest-grossing film of all-time on its way to a finish in the $500M range. Seven of the top ten films this weekend are sequels and all are performing worse than their predecessors – with the notable exception of Dory.

The overseas take climbed to $110.3M led by China where the second weekend tumbled by two-thirds for a cume of $30.2M. That put the global sum at $396.9M with several top markets yet to open.

Opening in second place to rocky results was the big-budget sci-fi sequel Independence Day: Resurgence with an estimated $41.6M from 4,068 locations for a $10,226 average. The PG-13 film continued this summer’s string of sequels that audiences never asked for and performed below the levels of its predecessor. 20 years ago, Independence Day was a pop culture phenomenon opening mid-week ahead of the Fourth of July holiday with $50.2M over the Friday-to-Sunday period and $96.1M over the six-day debut period which began on Tuesday evening with shows starting at 6pm. Yes, pre-shows existed many years ago too. ID4 ended up as the top-grossing film of that year.

Even with a Friday launch, higher ticket prices, 3D, IMAX, and 1,186 more theaters, Resurgence still saw a much lower opening weekend than the 1996 hit. In fact when comparing admissions, the sequel pulled in 55-60% fewer people. Many cast members returned in the sequel, but Will Smith was noticeably absent. The actor has had more flops than hits in recent times so it is hard to determine what impact his presence would have had, but overall consumer excitement was never very high for Resurgence.

Studio data from Fox showed that the audience was understandably more male (58%) while 64% were over 25. Reviews were mostly bad and the B CinemaScore grade indicates that paying audiences were only moderately happy with the entertainment they got.

With a budget reportedly north of $160M, the Roland Emmerich-directed action tale is global in scope and made to earn its revenues from around the world. Independence Day: Resurgence made use of its day-and-date roll-out by grossing a hefty $102.1M internationally for a $143.7M global bow this weekend. China, of course, repped the biggest share with a large $37.3M weekend almost matching the domestic gross. The next biggest markets were Korea with $7.4M, the U.K. with $7.3M, and Mexico with $6.8M.

Kevin Hart films often tank on the second weekend, but with The Rock on board, Central Intelligence dropped 48% to an estimated $18.4M taking third place. Given the big marketing push and the arrival of new action offerings, that was a reasonable sophomore decline for Warner Bros. With $69.3M to date, the action-comedy looks to end its run in the area of $115M which would be second-best all-time for Hart after Ride Along‘s $134.9M.

Blake Lively scored a commercial hit, and proved her box office pull, with the shark attack thriller The Shallows which exceeded expectations to open to an estimated $16.7M in fourth. Averaging a solid $5,638 from 2,962 locations, the PG-13 pic was powered by young women and served as fresh content in a marketplace filled with recycled brands. Sony’s well-reviewed one-woman survival story played to an audience that was 54% female and 50% under 25. With a production cost of only $17M, Shallows will end up as one of the more profitable titles of the summer.

Audiences had no interest in Matthew McConaughey’s new slave drama Free State of Jones which flopped with an opening weekend of only $7.8M, according to estimates, from 2,815 theaters for a weak $2,761 average. Backed in part by Chinese financing, the STX release earned negative reviews which turned off its target audience of serious-minded adults. Plus the story was something that summer ticket buyers were just not in the mood for in the first place.

Dropping out of the top ten in only its third weekend was the big-budget adventure Warcraft with an estimated $2.1M and terrible $43.9M cume. The Universal tentpole has suffered back-to-back 70% declines and is looking at a domestic final of about $47M. The video-game-inspired Mortal Kombat from 21 years ago did much better with $70.4M in the summer of 1995. But overseas is a different story for Warcraft where the China total has risen to $221M even though it is decelerating fast there. Global is now $412.2M with a whopping 89% coming from outside North America.

Disney owns four of the six biggest blockbusters of 2016 and two of them fell out of the top ten this weekend. Captain America: Civil War climbed to $403.9M domestic and $1.15 billion worldwide while The Jungle Book rose to $358M and $929.5M global.

The top ten films grossed an estimated $178.1M which was up 2% from last year when Jurassic World remained at number one for a third time with $54.5M; and up 4% from 2014 when Transformers: Age of Extinction debuted in the top spot with $100M, a figure other distributors disputed.