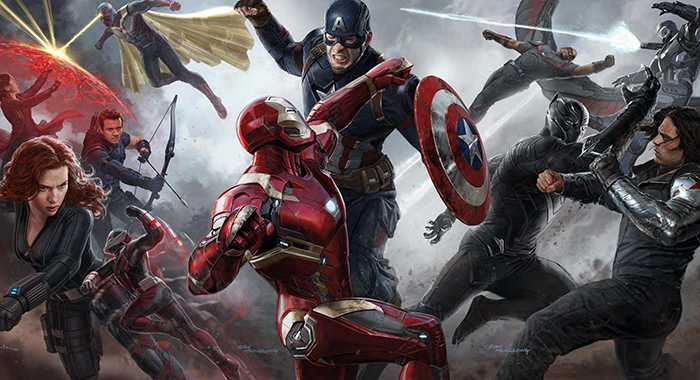 The Marvel smackdown Captain America: Civil War was once again the most popular movie in the land grossing an estimated $72.6M in its second frame for a drop of 60% from its massive debut. The decline was just slightly bigger than what other super hero sequels with the same characters saw in their second weekends. Last May’s Avengers: Age of Ultron fell 59%, the previous year’s Captain America: The Winter Soldier dropped 57%, and 2013’s Iron Man 3 declined by 58%.

Civil War‘s fall was on the higher end, but generally in the same neighborhood. It had some of the best reviews and word-of-mouth of any of these hits, but super hero sequels tend to draw their pre-defined audiences upfront and so even well-liked installments can see large drops on the sophomore session.

The cume now sits at a sturdy $295.9M and the super soldier may cross the $300M mark on Monday night becoming the fifth such blockbuster of 2016, and third for Disney. And it’s only the middle of May. Civil War is currently running 4% ahead of Iron Man 3 and 6% behind Ultron. All three opened on the first weekend of May. At this trajectory, a domestic final in the neighborhood of $420M should result. That would mark a jump of more than 60% over the $259.8M of Winter Soldier.

Disney and Marvel saw wonderful results overseas for a third weekend. The new Captain America grossed an estimated $84.2M falling 62% from last weekend. The international cume rose to $645M (led by China’s $155.8M) lifting the global gross to a stellar $940.9M. $63.7M has come from 955 IMAX screens worldwide. It now stands as the sixth biggest super hero movie of all-time behind both Avengers films, Iron Man 3, and the last two Dark Knight pics. The billion dollar mark could get shattered this Friday. Direct competition will get hot soon as X-Men: Apocalypse opens in much of the world next weekend followed a week later by its North American launch for the Memorial Day holiday frame.

Audiences were still mesmerized by The Jungle Book which spent its fifth weekend among the top two spots. The VFX-heavy adventure dipped only 28% to an estimated $17.8M joining the triple-century club this weekend with a new cume of $311.8M. On Monday it will join the all-time Top 50 bumping off Iron Man 2 and a final of $350M or more looks likely. Overseas grosses rose to a stellar $516.3M led by China’s $151M putting the global tally at a superb $828.1M with Korea and Japan still to open.

George Clooney, Julia Roberts, and director Jodie Foster supplied the starpower for the hostage thriller Money Monster but were met with only a moderate debut with an estimated $15M. Sony averaged $4,832 from 3,104 locations for the R-rated action pic which tried to be the alternative choice for mature adults at a time when comic book heroes and Disney kidpics are the main options. Reviews were mixed.

Money Monster‘s opening was well below those of other adult-skewing crime thrillers from stars like Denzel Washington and Liam Neeson who often break $20M and even $30M on the first weekend playing to a similar audience. With a so-so B+ CinemaScore grade and direct competition for adults coming next weekend from The Nice Guys starring Russell Crowe and Ryan Gosling, the road ahead will not be easy. The production budget is reported to be only $27M (not including the marketing spend) and international prospects look good so Money Monster may end up being a moneymaker.

The Blumhouse horror film The Darkness opened on Friday the 13th with a moderate release and grossed an estimated $5.2M from 1,755 locations for a mild $2,952 average. Rated PG-13, the supernatural chiller was panned by those critics who chose to review it. Exit poll data showed that the audience was 53% female, 55% under 25, and 55% non-white.

Coming off of the titular holiday, and facing another Julia Roberts movie opening, Mother’s Day plunged 71% to an estimated $3.3M putting Open Road at $28.8M. Earth’s biggest blockbuster of 2016 – Zootopia – followed with an estimated $2.8M slipping a slim 12% for the smallest drop by far of any wide release this weekend. The cume rose to $331.8M putting the Disney toon at number 41 on the list of all-time domestic blockbusters. Worldwide, Zootopia climbed to $969.8M powered by China’s $235.6M.

Universal’s big-budget adventure The Huntsman: Winter’s War grossed an estimated $2.6M, off 35%, for a new cume of $44.5M domestic. The worldwide run is slowing and struggling at $153.9M from all global markets except Japan.

Three comedies rounded out the top ten with under $2M a piece. Keanu took in an estimated $1.9M, down 42%, for a $18.6M total for Warner Bros. The studio also saw its Barbershop: The Next Cut slip 40% to an estimated $1.7M putting Ice Cube at $51.4M to date. It’s the 13th $50M+ hit in the star’s career and many of those films had relatively low budgets. Melissa McCarthy saw a 38% slide to an estimated $1.2M for The Boss which has banked $61.1M to date for Universal.

A24 scored the biggest opening weekend average of the year for an indie film with its platform release of the critics’ darling The Lobster in four theaters in New York and Los Angeles. The Colin Farrell-Rachel Weisz pic bowed to an estimated $188,000 for a sizzling $47,000 average. Winning the Cannes Jury Prize last year, Lobster is set in a world where people have 45 days to find true love or else they turn into an animal of their choosing. A24 expands next weekend before going nationwide on May 27.