Zendaya surprises in the Drama Actress category, Schitt's Creek is the little Canadian comedy that could, and more of the biggest moments from the 72nd Primetime Emmy Awards.

For a show produced remotely from dozens of locations across the globe — it was nearly 4 a.m. when Succession creator Jesse Armstrong accepted his series’ award for Outstanding Drama — the 2020 Primetime Emmy Awards were surprisingly gaffe-free. Sure, there were a couple of Zoom lags, but ultimately this was a less catastrophic live television program than some perfectly normal years.

The Jimmy Kimmel–hosted show gave out 23 awards in three hours and only ran five or so minutes over. The tone swung appropriately between serious and silly, honoring the best in television in an incredibly chaotic year while also paying tribute to essential workers and acknowledging the difficult reality we’re all living in.

The ceremony also raised $2.3 million for No Kid Hungry, and the Television Academy pitched in another half a million, bringing the donation total to $2.8 million for charity that probably would’ve been spent on afterparties instead. (For those wondering, the Zoom afterparty Kimmel joked about as he closed the show was not real — we did check.)

There weren’t any La La Land/Moonlight moments, nor were there any outrageous oversights. There were, however, a few surprise winners — Zendaya’s trophy for Euphoria (complete with breathless, excited acceptance speech) especially — making the show a little more exciting than sure thing after sure thing winning.

Actually, even the non-winners had memorable moments: Ramy Youssef posted a video of a hazmat-suited PA waving through his window after he lost his category to Eugene Levy, proving those Kia commercials weren’t completely kidding; they really did bring Emmy trophies to the homes of nominees — in the Los Angeles area, at least.

when you lose the emmy pic.twitter.com/ECkbGcoHBA 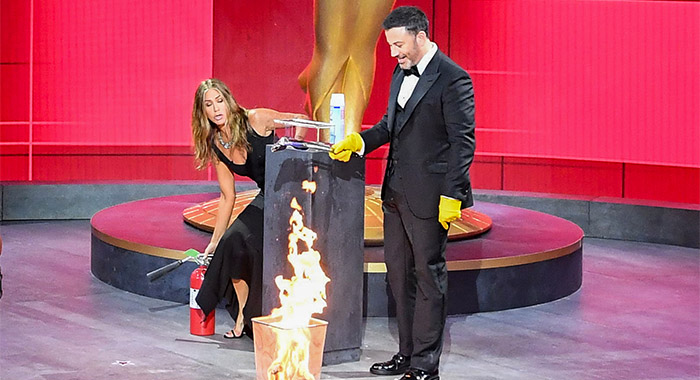 Award show openings are difficult in the best of circumstances, let alone when they’re produced virtually from an empty basketball arena in the middle of a global pandemic. And while Kimmel’s joke monologue started weird — why wasn’t he acknowledging that all of the celebrity reaction shots were from old ceremonies? — once he finally did, and introduced all of the technological feats the producers were performing in order to bring this remotely produced live TV show to air, things went much smoother. Well, except for the first award presentation — after bringing out pal Jennifer Aniston to assist, the duo’s Covid-precaution bit ended with Kimmel dousing the winner’s envelope in Lysol and lighting it on fire. Aniston swiftly blasted a fire extinguisher on the mini inferno, but the kindling proved to be a little TOO good — she had to blast it an extra two times when the flames continued to burn. We could hear nervous stage direction coming from off camera.

The rise of Schitt’s Creek from niche cable network Canadian import to Netflix hit to Emmys sweep is one even the writers of the kindhearted, optimistic sitcom might not have scripted. But the series’ arc — culminating in a sweep of all seven major categories (series, all four main acting categories, writing, and directing) — is ultra satisfying for a show that championed acceptance and heart above all else. The closest other shows have come to achieving this feat is Taxi‘s five wins (out of six noms) in 1981, and All in the Family‘s six wins (out of seven) in 1972.

With Catherine O'Hara, Eugene Levy, Dan Levy and Annie Murphy winning their #Emmys tonight, that means our little Canadian show is the first comedy OR drama to ~ever~ sweep all four acting categories, and that is absolutely wild ?? pic.twitter.com/fEUnaLoDBr

Catherine O’Hara and Levy getting some richly deserved TV accolades was satisfying enough, but their TV children Annie Murphy and Dan Levy, too? Even better. Plus, the emotion shared between Eugene and Dan, co-creators and real-life father and son, was so genuine you could feel the love through the screen. In fact, the show’s remote celebration in Canada was filled with joy, with every cast and crew member in attendance getting emotional as the show continued to take home awards.

Anthony Anderson was at the Staples Center to perform a whole bit with Kimmel about how this year’s Emmys in particular were the blackest yet — about 34 percent of this year’s nominees were Black — and what a shame it was that he and his cohort were not able to celebrate together. Although Anderson didn’t win himself, Regina King’s expected win (wearing a shirt that paid tribute to Breonna Taylor) kicked off a successful night for Watchmen (her costar Yahya Abdul-Mateen II took home a trophy, as did the show itself and its writing); Uzo Aduba beat several Hollywood heavy-hitters for Mrs. America while also in a Breonna Taylor shirt; and Disney star–turned–prestige cable ingenue Zendaya’s Drama Actress win for Euphoria was perhaps the biggest upset of the night. Her win makes her the second Black actress in 72 years of Emmys history to win in that category, following Viola Davis.

And let’s not forget Oprah and Chris Rock introducing Tyler Perry, the recipient of this year’s Governor’s Award, who was present at the Staples Center to accept his trophy in person (and deliver a moving speech about perseverance and his grandmother’s quilt). 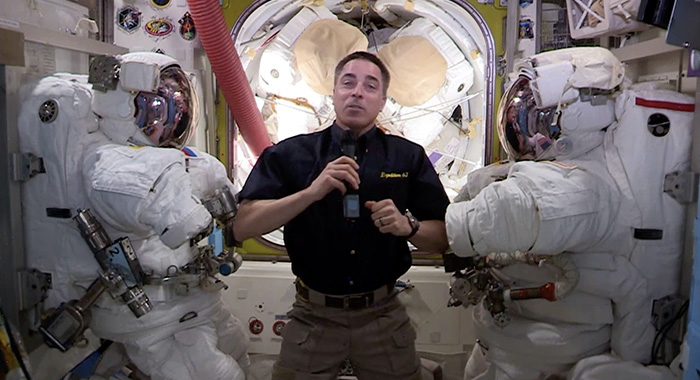 The existence of award shows is essentially a way for Hollywood to pat themselves on the back, and there was plenty of that in this show. But the producers also managed to pay tribute to essential workers and people doing incredibly important jobs in this time, including doctors, nurses, teachers, mail carriers, UPS guys, and even astronauts. Commander Christopher Cassidy filmed a segment from the International Space Station, though Jeremy Irons was nowhere in sight. 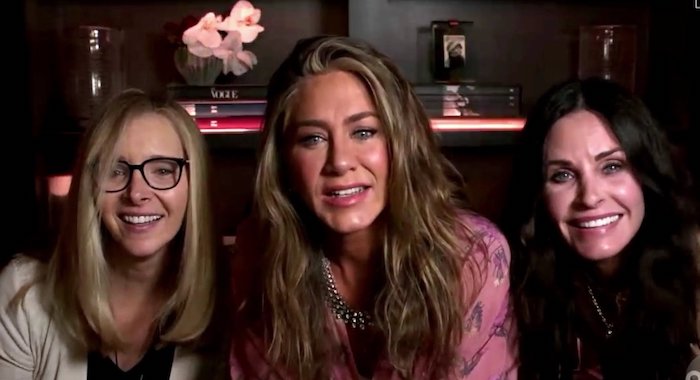 Sorry, HBO Max — that long-awaited Friends reunion (pushed a couple times now due to Covid) will be overshadowed by Aniston, Courteney Cox, and Lisa Kudrow popping into a Zoom frame together for a bit about them living together and watching the Emmys. It was a cute moment, especially since the three women are clearly IRL friends and looked radiant as they hung out together. Jason Bateman, whose random appearances was a running gag in the show and who is known to hang out with the Friends gang, was there too.

What were your favorite Emmys moments? Share in the comments below! 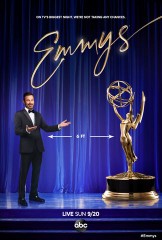